The Ion Ratiu Democracy Lecture at the Woodrow Wilson Center

The Ion Ratiu Lecture is pleased to announce that the 2007 recipient of the Ion Ratiu Democracy Lecture and Award is Professor Anatoli Mikhailov. Professor Mikhailov is one of the leading personalities fighting for democracy in Belarus.

The Ion Ratiu Lecture is pleased to announce that the 2007 recipient of the Ion Ratiu Democracy Lecture and Award is Professor Anatoli Mikhailov. Professor Mikhailov is one of the leading personalities fighting for democracy in Belarus.

Dr. Mikhailov has been exiled to Vilnius for his opposition to the Lukashenko regime. A highly respected expert on German philosophy, Dr. Mikhailov is the Rector of the European Humanities University, a university he established in Minsk in 1992 in order to provide an alternative to the established education process inherited from the Soviet Union. After President Lukashenko took office in 1994, and especially after he began instituting "reforms" to consolidate his power, the university became a focal point of civic opposition. In 2004, the Lukashenko regime ordered the university shut down. Mikhailov was forced to leave the country and has been in exile in Vilnius since. The University was reopened in Vilnius since 2005 with EU help and is educating 270 graduate students in addition to a number of students that are taking long distance learning courses from the university.

The purpose of the Ion Ratiu Democracy Lecture is to bring visibility and international recognition to the ideas and accomplishments of individuals around the world who are working on behalf of democracy. The event expresses the deep commitment to democracy of the late Ion Ratiu through his contributions as a Romanian politician as well as his interest in democratic change worldwide. It is a historic event that reflects and joins the rich cultural traditions of Romania and the United States by promoting democratization at a time when fundamentalist thinking and movements are on the rise again around the world. The Ion Ratiu Democracy Lecture aims to replicate for campaigning democrats today, whether in exile from repressive regimes or representative of today's emerging democracies, the life-changing experience in Washington, D.C., of the then young Romanian democrat, Ion Ratiu, during the 1970s and 80s. 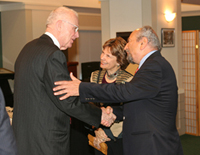 The Ion Ratiu Democracy Lecture strives to enrich the intellectual environment in which ideas about democracy and democratic change circulate, both within and beyond Washington. It seeks to make available for students, scholars, practitioners, and policymakers the experience and insights of individuals whose work and commitment on behalf of democracy are broadly in keeping with those of Ion Ratiu; to provide opportunities to engage a wide range of Washington-based and international audiences to increase their appreciation of the contribution that individuals can make in advancing democratic change. Equally important, the Lecture aims to be of value for the individual or individuals who are selected to participate, providing opportunities to reflect and learn, and to benefit from individual and institutional resources that are uniquely available in Washington, including meeting with U.S. government officials.

Recipients of the IRDL Prize

2007 - Anatoli Mikhailov, Belarus. For more information, and up to date information about this year's lecture, visit the 2007 lecture page

The board of the IRDL is formed by former Ratiu Award recipients. Presently, the Foundation and the Wilson Center also have a representative on the board. The selection of candidates is made from a pool of qualified individuals whose accomplishments in defense and support of democracy have made them internationally recognizable. The ideal candidates will be thoughtful practitioners and engaged thinkers. The Foundation expects the primary focus to be on civil society leaders who are either established or emerging, though current or former government officials will be considered.

Recipients of the award will be hosted in Washington, DC by the Wilson Center for 7 days, to allow maximum interaction with and mutual benefit from academics, practitioners, Ratiu family members and Ratiu Foundation friends in the DC area. 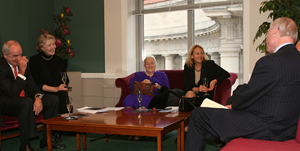 While the nomination process is open to the public, the Wilson Center does not accept self-nominations for the Ratiu Award. Applications, on behalf of the candidates, should be made via e-mail to ionratiu-lecture@wilsoncenter.org. Applications should contain a candidate introduction (cover letter), two additional letters of support, and a CV for the nominee. Additional application support materials, such as press clippings or publications, can also be included. Applications are reviewed once a year, but can be submitted on a rolling basis between 1 December and 1 May or each year.

An announcement of the recipient is made in July of each year by the Wilson Center.

The Woodrow Wilson Center subscribes to a policy of equal educational and employment opportunities. Discrimination based upon race, creed, color, gender, sexual preference or physical status is not permitted.

Ion Augustin Nicolae Ratiu, born in Turda, Transylvania, on June 6, 1917, was the son of Augustin Ratiu, a successful lawyer, mayor, county prefect and great-grandnephew of Dr. Ioan Ratiu, the leader of the Romanian National Party. A promising law student, Ion Ratiu seemed destined for an academic career, but in 1938 he was commissioned as top cadet at the Artillery Military Academy in Craiova, and in April 1940 he joined Romania's Foreign Service. He was sent to London as a chancellor at the Romanian Legation. The decision to align Romania with the Axis powers later in 1940 appalled Ion Ratiu, who resigned his post and obtained political asylum in Britain. He won a scholarship to study economics at St. John's College, Cambridge. In 1945 Ion Ratiu married Elisabeth Pilkington in London.

In exile in London after the communist takeover of Romania in 1946, Ion Ratiu threw himself into the struggle against communism, becoming a regular contributor to the Romanian Service of the BBC, Radio Free Europe and Voice of America. In 1957 his book "Policy for the West" was published, radically challenging contemporary western views of the nature of communism. He then went into shipping and later into real estate, where he accumulated considerable wealth. In 1975, the year he published another work, Contemporary Romania, Ion Ratiu decided to devote all his energy to the pursuit of a free Romania. Mr. Ratiu led the British – Romanian Association from 1965 to 1985 and played a key role in the setting up of the World Union of Free Romanians, of which he was elected president in 1984. After the fall of Ceausescu, he continued for some years to subsidize the publication outside Romania of the monthly Free Romanian, which he had launched in 1985.

Ion Ratiu returned to Romania in 1990 to run for the presidency. Although he became member of the Romanian Parliament, and served as both Deputy Speaker of the Chamber of Deputies as well as Romania's roving ambassador to NATO, his failure to win the presidency was a grave disappointment to many. Sympathizers continue to refer to him as "the best president Romania never had."

Ion Ratiu died in London surrounded by his family after a short illness, and in accordance with his wishes, was buried in January 2000 in his home town of Turda. His funeral was attended by over 10,000 people.

Ion and Elisabeth Ratiu established the Foundation in London, in 1979. The main objective of the Foundation is to promote and support projects which further education and research in the culture and history of Romania and its people. Projects, undertaken in Romania, are encouraged on different subjects, such as patrimony, civil society, democracy, civilization and environment protection. Grants are of variable size.