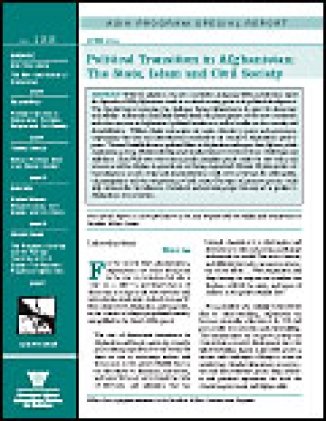 ABSTRACT:With the adoption of a new constitution in January 2004 and elections slated for September 2004,Afghanistan stands at a critical turning point in its political development. This Special Report examines the challenges facing Afghanistan in its quest for democracy and stability. Ambassador Said Tayeb Jawad details the promulgation of the new constitution and other successes in Afghanistan’s political transition as well as hurdles such as security and demobilization. William Maley enumerates six major obstacles to peace and governance, emphasizing that time and international commitment are crucial to Afghanistan’s path to peace. Thomas Barfield discusses political Islam in Afghanistan and argues that Afghans, while maintaining a strong Muslim identity, are generally resistant to extreme forms of ideology and radicalism. Sima Wali notes that serious gender inequities persist under the new order, and women, as well as Afghans in general, are not being empowered. Neamat Nojumi points out that indigenous sources of law and local institutions could serve as the basis for wider political participation and the strengthening of civil society. This type of grassroots process could help circumscribe the influence of warlords and external groups that may act as spoilers to Afghanistan’s reconstruction.

NEAMAT NOJUMI
The Prospect of Justice and the Political Transition of Civil Society: The Recovery Process of Afghanistan