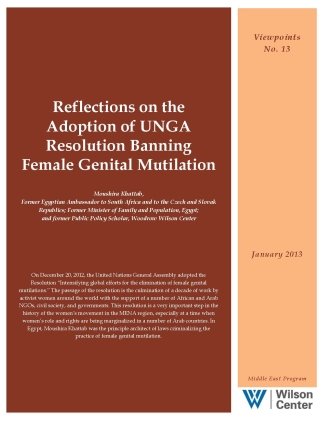 On December 20, 2012, the United Nations General Assembly adopted the Resolution “Intensifying global efforts for the elimination of female genital mutilations.” The passage of the resolution is the culmination of a decade of work by activist women around the world with the support of a number of African and Arab NGOs, civil society, and governments. This resolution is a very important step in the history of the women’s movement in the MENA region, especially at a time when women’s role and rights are being marginalized in a number of Arab countries. In Egypt, Moushira Khattab was the principle architect of laws criminalizing the practice of female genital mutilation.

Former Public Policy Scholar;
Former Ambassador of Egypt to South Africa and to the Federal Republic of Czechoslovakia; and Former Egyptian Minister of Family and Population
Read More

Audio
Democracy
An Update on the Hong Kong Protests

Blog post
Human Rights
Nontraditional Strategy Building: A Mapping of Cultural Movements in the Indo-Pacific
By Hyungtae Kim on June 27, 2019