Curse of the Vice Presidency

What’s a VP got to do with it?

Argentina has a long history of troubled relations between its presidents and vice presidents. Examples date back to 1959, when Alejandro Gómez resigned from Arturo Frondizi’s administration amid rumors he was plotting a coup against Mr. Frondizi, and includes the infamously strained relationship between Julio Cobos and Cristina Fernández de Kirchner during her first term as president, from 2007 to 2011.

Why all the strange bedfellows? What lies behind this phenomenon is Argentina’s unstructured party system and its personalist politics. Argentina’s weak parties suffered a major prestige blow during the economic crisis of 2001, as public chants of ¡Que se vayan todos! deepened fragmentation in the country’s traditional parties, Radicalism and Peronism.

Lacking well-institutionalized parties, coalition building between powerful governors and social movement leaders has been key to electoral success. In this context, offering an opposition leader the vice presidency is often necessary to forge alliances and expand a candidate’s base – both for attracting voters and assuring governability.

For that reason, President Mauricio Macri, leader of the party he created, the Propuesta Republicana, or PRO, selected a moderate Peronist senator, Miguel Ángel Pichetto, as his running mate this year.

But as Argentine history shows, there are also risks to choosing a running mate from outside a presidential candidate’s party, even if it helps win a close election.

When nothing goes right, go left

Perhaps the best-known case of a bipartisan ticket collapsing in Argentina was the breakdown of the Alianza – a coalition between the Radical Party’s Fernando de la Rúa and Carlos ‘Chacho’ Álvarez of the left-leaning FrePaSo Party, a Peronist offshoot.

Their alliance was formed to compete in the 1999 contest to succeed Peronist President Carlos Menem. But after obtaining the presidency, cracks quickly appeared in the coalition, as they failed to coordinate a response to the worst economic crisis in Argentine history. From labor market flexibilization to fiscal policy, the two factions were constantly at odds.

Tensions boiled over when Mr. de la Rúa ignored his vice president’s demand to fire members of the cabinet linked to a senate vote-buying scandal. In protest, Mr. Álvarez resigned after only ten months in office, essentially fracturing the coalition. A little over a year later, street protests forced Mr. de la Rúa from office.

Reaping what you sow

Another notorious case is Mr. Cobos, of the Radical Party, Ms. Fernández de Kirchner’s first vice president. The collapse of their partnership was televised; Mr. Cobos became persona non grata among Kirchneristas when he sided with protesting farmers and cast the tie-breaking vote in the senate in 2008, dooming Ms. Fernández de Kirchner’s Resolution 125, which had sought a steep increase on export taxes on soybeans.

To avoid the same mistake for her second term, she chose someone in her inner circle, her former finance minister, Amado Boudou, as her running mate. Facing a fragmented opposition, a strong economy and high approval ratings following the sudden death of her husband and predecessor Néstor Kircher, she did not need partisan alliances to secure reelection.

Given this history, why did Mr. Macri decide to broaden his coalition, which already includes the Radical Party? After all, in 2015, he had avoided joining hands with moderate Peronists as he sought to dislodge Ms. Fernández de Kirchner’s movement from power. 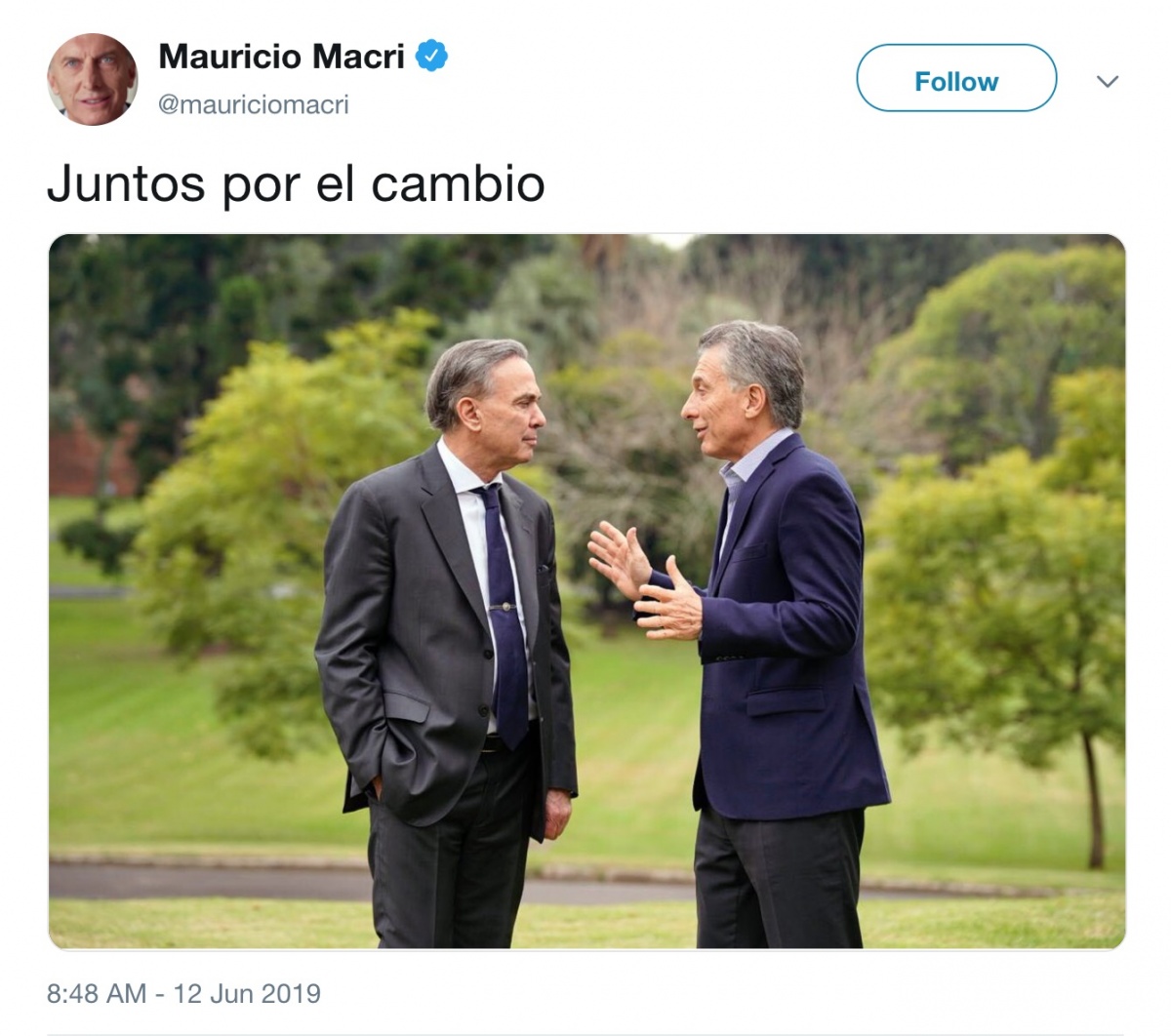 Indeed, Mr. Macri’s selection of Mr. Pichetto took everyone by surprise, including members of his own party.

A veteran politician and the leader of the senate Peronists since 2002, Mr. Pichetto is a pragmatist with center-right views. He supported Mr. Menem’s neoliberal reforms, stood by interim President Eduardo Duhalde during the 2002 crisis and managed a strong relationship with Néstor Kirchner. He also supported Ms. Fernández de Kirchner, though their relationship grew strained after she declined to support his failed campaign for governor of Rio Negro in 2011, and as her administration adopted more extreme economic policies.

For Mr. Macri, what Mr. Pichetto brings to the table is not votes – though he might help traditional Peronists who oppose Ms. Fernández de Kirchner stomach a vote for Mr. Macri. Rather, Mr. Pichetto offers Mr. Macri considerable experience in congress and strong ties with Peronist governors. Just as Mr. Pichetto has helped Mr. Macri advance difficult bills – including the controversial settlement with holdout bondholders, modest pension reform and austerity budgets – he would presumably help Mr. Macri deepen pro-market policies in a second term, including changes to Argentina’s rigid labor code.

Nevertheless, inviting Mr. Pichetto into his coalition is a political gamble for Mr. Macri.

Historically, Mr. Pichetto has earned a reputation for his loyalty. (Before Mr. Cobos’s vote against Resolution 125, Mr. Pichetto compared the vice president to Judas: “As Jesus told his disciples, what you have to do, do it quickly.”) But in Mr. Pichetto’s long career, this is the first time he is aligned with a non-Peronist. If elected, their partnership will have to overcome not only the pressures of high debt, inflation and low growth, but also Argentina’s colorful history of dynamiting coalition experiments.

Out of the frying pan, into the parrilla

- Among Argentina’s many economic ailments, inflation is the most politically sensitive

- Among Argentina’s many skyrocketing prices, spiraling food prices are the most politically sensitive

- Among Argentina’s many ballooning food prices, the price of meat is the most politically sensitive

So it was perhaps no surprise that among the emergency economic measures President Mauricio Macri announced in April was a promise to provide “cortes de carne a precios accesibles” –  specifically, 264,555 pounds per week of asado, vacío and matambre for $1.61 per pound.

On its face, that might seem like an arbitrary and uncharacteristically populist measure for Argentina’s center-right president, who has typically relied upon traditional tools to fight inflation, such as tight monetary policy and fiscal discipline.

But beef is a staple of the Argentine diet and culture, and a common way Argentines will measure their well-being, including as they evaluate candidates in October’s election. Indeed, Argentines consume more beef than any other country, and Sunday asados (barbeques) are ubiquitous. As a result, meat prices are as politically sensitive in Argentina as gasoline prices are in the United States.

In 1990, Argentine beef consumption reached 121.8 pounds per capita. By last year, it was down to 89 pounds – still almost three times the global average (33 pounds). That is why rising beef prices have unnerved Cambiemos, even as disinflation seems finally to have begun.

In January, beef prices increased by 6.7 percent, forcing many Argentine carnivores to settle for cheaper animal proteins, such as chicken and pork. Over all, per capita consumption of chicken in Argentina is up from 46.2 pounds in 2005 to 88.9 pounds last year. Per capita pork consumption doubled in the same period, to 23.5 pounds.

Mr. Macri is not the only Argentine president to wrangle with this meaty issue. In 2006, for example, President Néstor Kirchner temporarily banned beef exports to flood the local market and lower prices for locals. In the long run, Mr. Kirchner’s export controls – and similar interventions by his successor, Cristina Fernández de Kirchner – failed. Rather than reduce prices, the distortions reduced the country’s celebrated ranching industry. The number of cattle in Argentina fell from 58 million head in 2007 to 48 million by 2011. With fewer cattle and high demand, prices ultimately increased again.

Under Mr. Macri, Argentina’s cattle ranchers have begun to restore their herds; by 2017, the number of cattle was back up to 53 million. But the sector was hit hard by the recent drought; last year’s devaluation; high interest rates; pricy cattle feed; and lower purchasing power among struggling Argentines, who account for 86 percent of sales. As a result, beef prices have continued to rise, even as ranchers and producers continue losing money.

In response, Argentina’s beef producers have turned to the international market. The weaker peso has made Argentine beef more competitive abroad, propelling exports to $2.3 billion in 2018, a 116 percent increase compared to 2015. China is now Argentina’s largest market, with demand steadily increasing as incomes rise.

That is a relief to Argentina’s ranchers. But the growing export market has left Argentine producers less willing to lower prices domestically, at least without government pressure. Given the electoral calendar, it seems clear Mr. Macri’s price controls – however irrelevant to the broader fight against inflation – are designed to keep the price of an asado low, and to limit the political price of Argentina’s expensive steaks.