Catholic Relief Services launches a new publication that provides guidance to water development practitioners and others striving to incorporate water and peacebuilding into their project frameworks.

Wednesday
11:00am – 1:00pm ET
This event will be webcast live
Live stream will begin in approximately —:—:—

"Water disputes that can start at the local level—little things—have the potential, in extreme cases, to burgeon into something much bigger," warned Ken Hackett, president of Catholic Relief Services (CRS), during a discussion at the Woodrow Wilson Center (Webcast) for the launch of CRS' new publication, Water and Conflict: Incorporating Peacebuilding into Water Development. The report provides guidance to water development practitioners, civil society members, and others striving to incorporate water and peacebuilding into their project frameworks.

In recognition of water's potential to drive conflict, Hackett—part of a panel featuring Jason Gehrig, Water and Conflict‘s primary author; William Hall, professor of conflict resolution at Georgetown University; and Tjip Walker, team leader of USAID's conflict management and mitigation office's warning and analysis unit—urged those working on water to focus attention on identifying and diffusing areas of emerging disagreement while they are still manageable. "We must, in a proactive way, incorporate peacebuilding methodologies in water and sanitation work," said Hackett.

Looking Beyond Tubes and Tanks 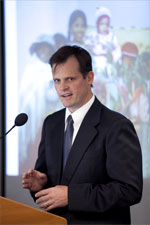 Prior to witnessing violent protests within the Altiplano region of Bolivia, Jason Gehrig assumed that the primary obstacles to successful water development efforts would be found in the technical phase of designing or building delivery systems. Local political developments, however, demonstrated that "we can't just be looking at development without also looking at the structural issues at play," said Gehrig.

Emphasis on "social infrastructure" and the inclusion of peacebuilding paradigms allows for conflict transformation and the mitigation of future violence through heightened conflict sensitivity by local practitioners. Such understanding and sensitivity to local conflicts and structures, Gehrig asserted, can only be achieved by "listening, winning hearts and minds (beginning with our own) by getting close to the people so that their struggle for life, for dignity, for peace, becomes our own." 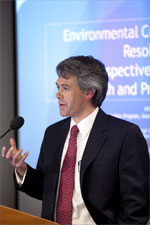 For Hall, the goal of ECR is not only conflict resolution, but "also how people will be involved." Adapting a framework design from the International Association for Public Participation, Hall reminded the audience that decision-makers must clearly communicate both the goals of their intervention as well as the degree of public involvement required and desired. These issues are sensitive; Hall emphasized that, once a commitment has been made, it is extremely important "to be true to [one's promises]."

In situations such as those included in the CRS report, successful peacebuilding efforts—which result in high-quality agreements and improved working relationships between the affected parties—must include effective engagement of appropriate stakeholders, proper mediation, and high-quality information. While many of these factors may be seen as additional procedural complications and expenses, Hall countered that recent research has shown that, compared to standard methods, agreements reached within an ECR context grant economic and environmental benefits beyond those afforded by alternative processes. 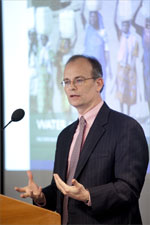 governance of water and other common pool resources, often magnets for mismanagement and contention, should be a pivotal concern for peacebuilders in fragile states. Drawing on research on governance and conflict, Walker explained that countries that are more democratic, and allow for greater social participation, are at a lower risk for violent conflict.

Walker reminded the forum that Elinor Ostrom's work demonstrates it is possible—if there is an "enabling environment" for governance—to manage such resources without exposure to dire consequences. In many cases, however, Ostrom's requirements for sustainable management are unfortunately difficult to achieve and are further complicated by pre-existing challenges stemming from economic dependencies and political arrangements.

As for previous transboundary river conflict projects, Walker noted that "most of them have been positive...[which] seems to suggest that we are all in this together." Successes such as these grant hope for the future, yet also demonstrate a need for negotiated agreements across political boundaries.

"Under the right circumstances," Walker concluded, "we do have the ability to manage these resources effectively in ways that are perceived as generally being effective and legitimate."