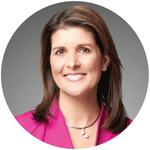 Nikki Haley is the former United States Permanent Representative to the United Nations. She served as a member of President Donald Trump’s Cabinet and the National Security Council.

At the United Nations, Ambassador Haley introduced reforms that resulted in increased efficiency, transparency, and accountability. She negotiated more than $1.3 billion in savings, including rightsizing UN peacekeeping missions to make them more effective and targeted while improving their ability to protect civilians throughout the world’s most troubled regions.

In the UN Security Council, Ambassador Haley worked to defend Americans’ interests and to safeguard the country.  She spearheaded negotiations for the passage of the strongest set of sanctions ever placed on North Korea for its nuclear weapons program.

Ambassador Haley also championed human rights and challenged the oppressive regimes who violated these codes, including Iran, Syria, Venezuela, Cuba, and Russia.  During the U.S. presidency of the UN Security Council, she hosted the first-ever session devoted solely to promoting human rights.

Prior to becoming the twenty-ninth U.S. Permanent Representative to the United Nations, Ambassador Haley was elected in 2010 as the first female and first minority Governor of South Carolina. 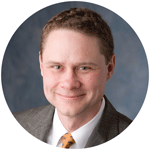 Wes Bush is Chairman of Northrop Grumman Corporation, a global aerospace and defense technology company, a position he has held since 2011.

Mr. Bush previously served as Northrop Grumman’s chief executive officer from 2010 through 2018. Prior to 2010, he served as the company’s President and Chief Operating Officer, Chief Financial Officer and President of its Space Technology sector.

Prior to the acquisition of TRW by Northrop Grumman in 2002, Mr. Bush had served as President and Chief Executive Officer for TRW’s UK-based global Aeronautical Systems and as Vice President of TRW Ventures. He joined TRW in 1987 in its space business, and prior to joining TRW, he held engineering positions with both the Aerospace Corporation and Comsat Labs. Mr. Bush serves on the boards of several non-profit organizations including Conservation International, the Inova Health System and the USO Board of Governors. He is a member of the National Academy of Engineering.