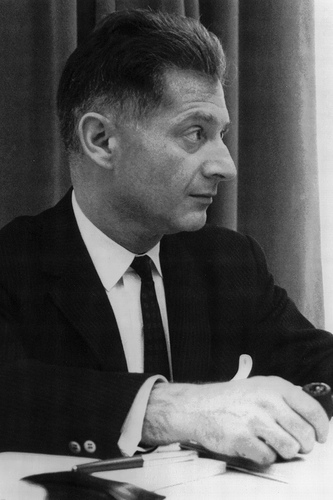 André Finkelstein served as deputy director general of the IAEA from 1969 to 1973 and as a high-ranking official in the Commissariat à l’Énergie Atomique (CEA). Finkelstein, a proponent of the peaceful uses of nuclear energy, participated in conferences in Geneva on nuclear policy. Finkelstein also served as advisor and alternate to the French representative to the IAEA.

André Finkelstein (b.1923) was deputy director general of the IAEA from 1969 to 1973 and a high-ranking official in the Commissariat à l’Énergie Atomique (CEA), the French government’s oversight body  civilian and military nuclear activities.

As a graduate student, Finkelstein studied physical chemistry, spending two years at the University of Rochester and joined the CEA in 1953 after earning his Ph.D. He originally studied tritium, a radioactive isotope of hydrogen, in a CEA lab. When the CEA expanded in 1958, Finkelstein became a senior officer in the department of external relations and programs. While serving in this role, Finkelstein participated in conferences in Geneva on the peaceful use of nuclear energy and served as advisor and alternate to the French representative to the IAEA. In 1967, he was promoted to deputy director in the cabinet of the high commissioner. He also worked in collaboration with the European Nuclear Energy Agency (ENEA).

In 1969, Finkelstein became deputy director general in charge of research and isotopes at the IAEA, where he held until 1973. In 1974, Finkelstein returned to the CEA to become deputy commissioner of the mission for nuclear safety and protection. The CEA promoted him to secretary of the central commission for nuclear installation safety (commission centrale de sûreté des installations atomiques, CSSIA) within the same year. Finklestein later served as coordinator of archives and history at the CEA from 1983 until his retirement on July 1, 1988.

This interview with Dr. André Finkelstein was conducted at his apartment in Paris on June 17, 1993.  Finkelstein was then seventy years of age, a youthful looking retiree with a long career as a scientist-bureaucrat at the French Commissariat à l’Énergie Atomique (CEA).  I was referred to Finkelstein by Bertrand Goldschmidt, the legendary French nuclear scientist (and the only Frenchman to work on the Manhattan Project) whom I interviewed two days earlier.

Three biographical layers made Finkelstein a “person of interest” for my historical research into the fabric of French-Israeli nuclear relations. First, as a veteran of the CEA with decades of experience in “external relations,” Finkelstein was a first-hand witness to much of this history.  Second, as a coordinator of archives and history in his last years at the CEA, Finkelstein was aware of the ongoing institutional sensitivity to that history.  Finally, as I learned during the interview itself, Finkelstein had strong family ties with Israel.

As we started chatting it became immediately obvious that Finkelstein knew personally most of the Israeli players on French-Israeli nuclear relations, including Shimon Peres, the architect of the French connection that led to the Dimona deal, as well as figures such as Shalheveth Freier, David Peleg and Tanchum Grissim who all served as Israeli science attachés in during the late 1950s and 1960s.

Given his Jewish background, Finkelstein was sensitive to the none-too-subtle Jewish dimension that sometimes influenced French-Israeli relations, particularly in the first two decades following World War II.  In Finkelstein’s view, the nuclear ties between France and Israel began prior to Peres’ political breakthrough and reflected a sense of sympathy towards a young Israeli state and an associated sense of shame over French conduct towards Jews during the Holocaust.  That sentiment was visible among the top scientific leadership of the CEA (e.g., Francis Perrin, Pierre Guillaumat) as well some prominent politicians (e.g., Maurice Bourges-Maunoury, Jacques Soustelle).

Finkelstein noted that some members of the French security establishment were sympathetic to the Israeli cause for less enlightened reasons. The army’s representative at the CEA, General Lavau, commented that because half of the American physicists are Jewish and are giving American secrets to Israel, “if we have a good agreement with Israel we will get access to American secrets.”  Finkelstein added with a smile that “this [assertion] was stupid, of course.”

Overall, the interview provides a personal prism  to examine the origins of French-Israeli nuclear cooperation and the role of France’s model of “going nuclear” in the development of Israel’s own idea of nuclear opacity.