In April, the U.S.-led coalition escalated its airstrike campaign against the Islamic State – also known as ISIS, ISIL, or Daesh. The United States and its partners conducted 548 airstrikes in Iraq and 149 airstrikes in Syria, a 20 percent increase compared to March.  In Iraq, the coalition focused on preparations to dislodge ISIS from Mosul, a key stronghold held by ISIS since June 2014. More than 140 airstrikes targeted Mosul in April – around 26 percent of the total number of airstrikes in Iraq that month. Additionally, on April 20, Defense Secretary Ash Carter announced that AH-64 Apache attack helicopters and 217 additional special operations forces would be sent to Iraq to support the Mosul offensive.  In Syria, nearly half of the airstrikes in April targeted Mar’a, north of Aleppo. Only 14 airstrikes – around nine percent of the total in Syria – targeted ISIS’s de facto capital of Raqqa. Recognizing the limits of air power, U.S. officials also took measures to increase U.S. military influence on the ground. On April 1, military spokesman Col. Steve Warren announced that the United States had begun training “dozens” of Syrian rebels to fight ISIS, a revamped version of a similar training program that ended in October 2015. And on April 25, U.S. officials announced plans to send an additional 250 special operations forces to Syria. The following graphics illustrate key data points and trends in the air campaign as of April 2016. TRENDS IN APRIL: The U.S.-led coalition conducted 22 percent more airstrikes in Iraq and 13 percent more airstrikes in Syria compared to the previous month. 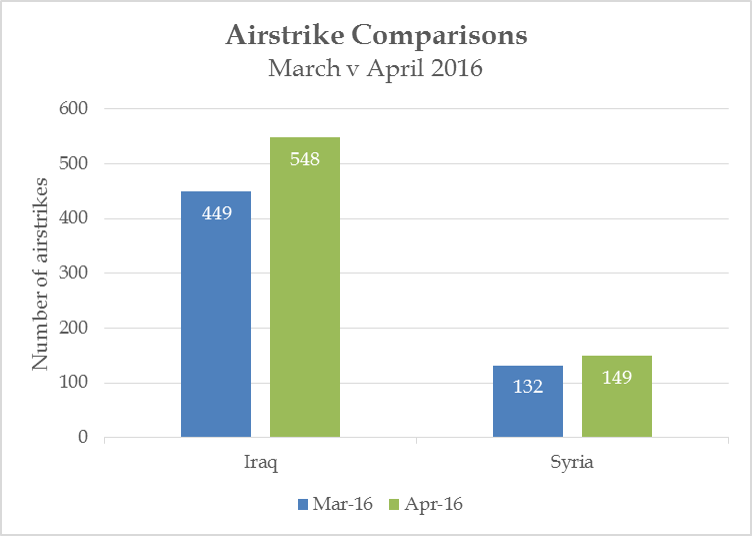 COMPARATIVE TRENDS: The U.S.-led coalition conducted more airstrikes in Iraq in April than any other month of the campaign so far. 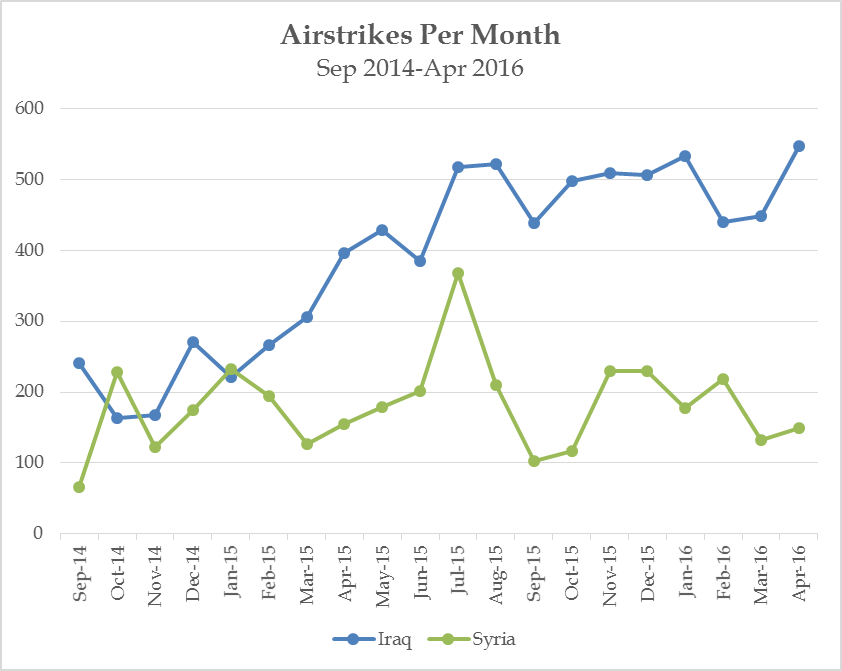 TRENDS IN IRAQ: In Iraq, around a quarter of the airstrikes in April targeted Mosul. Hit, a town near Ramadi, was another frequent target. It accounted for 63 strikes, or around 11 percent of the total for the month. 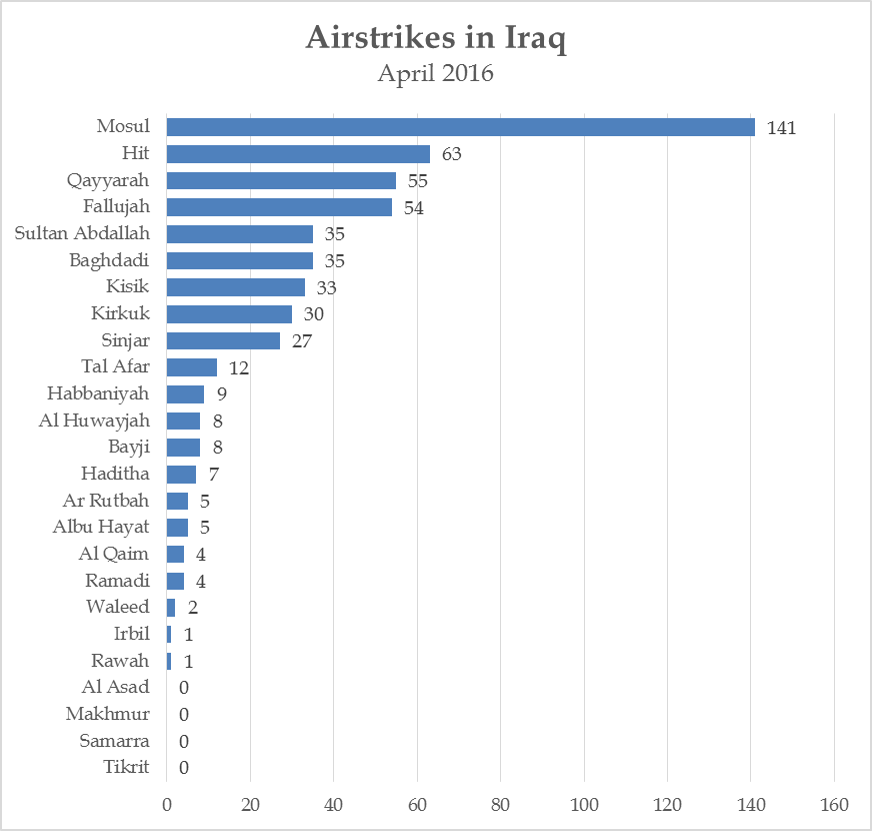 TRENDS IN SYRIA: In Syria, the U.S.-led coalition conducted 71 airstrikes on Mar’a, near Aleppo, accounting for around 48 percent of the airstrikes in April. Only 14 airstrikes, around nine percent of the total, targeted ISIS’s de facto capital in Raqqa. 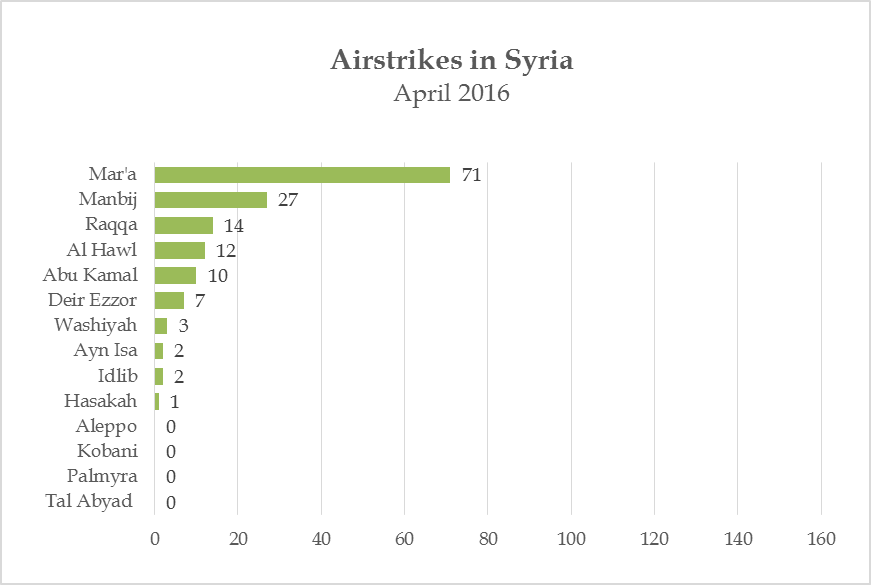 ON THE MAP: This map illustrates the airstrikes by location and concentration. 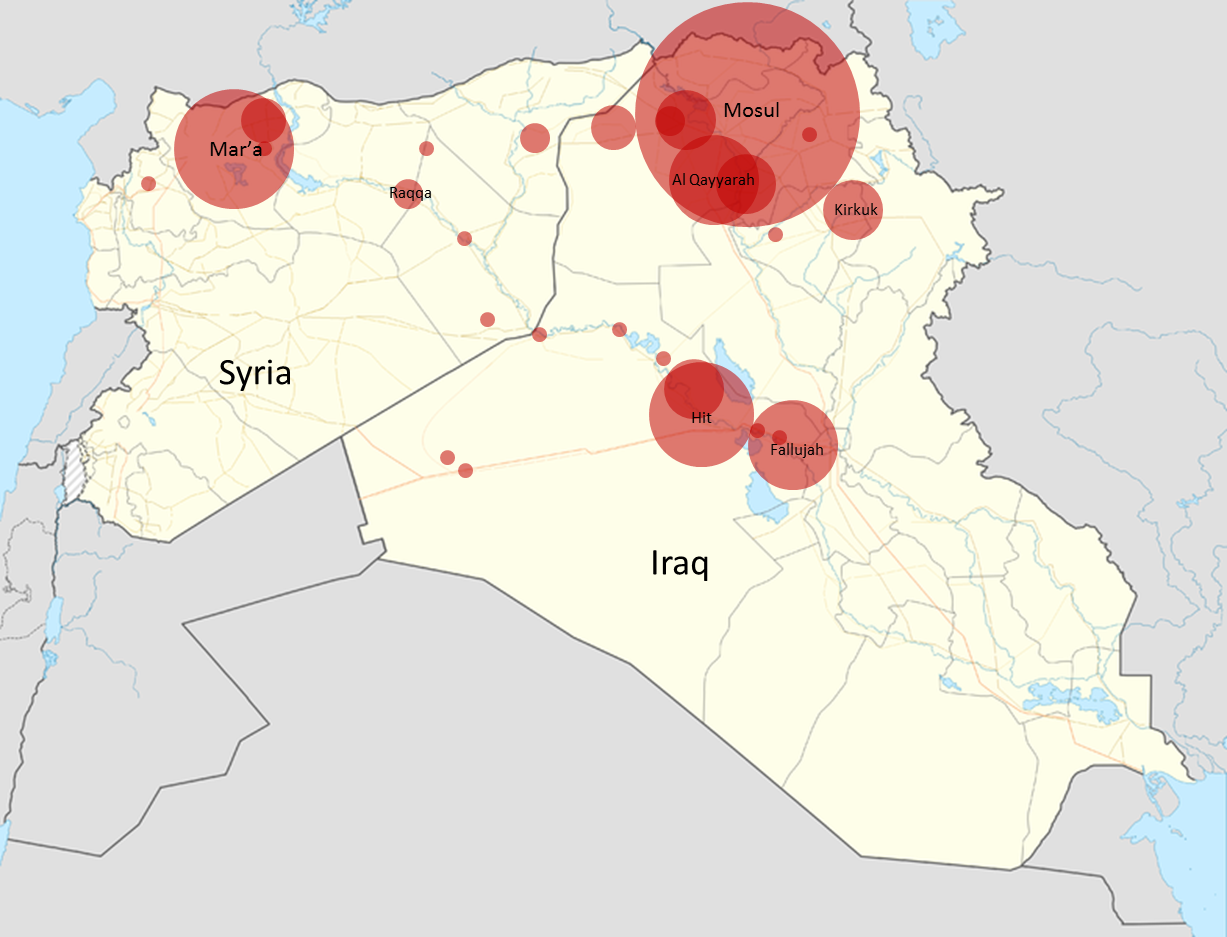 U.S./COALITION AIRSTRIKES: Between August 2014 and April 2016, the United States conducted 76 percent of the airstrikes in Iraq and Syria. Coalition partners conducted the remaining 24 percent. 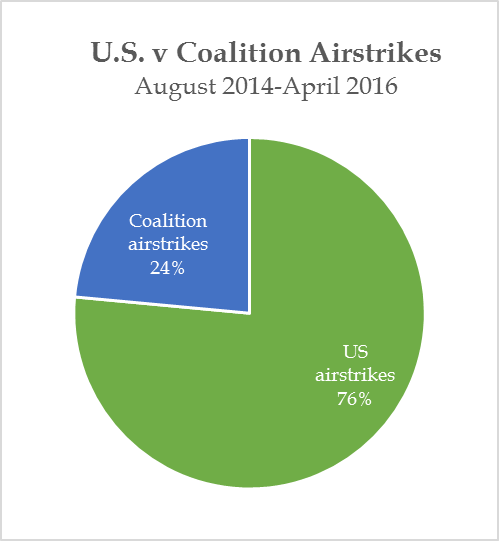 COST: By the end of March 2016, the United States had spent nearly $7 billion on Operation Inherent Resolve, averaging around $11.6 million per day.* 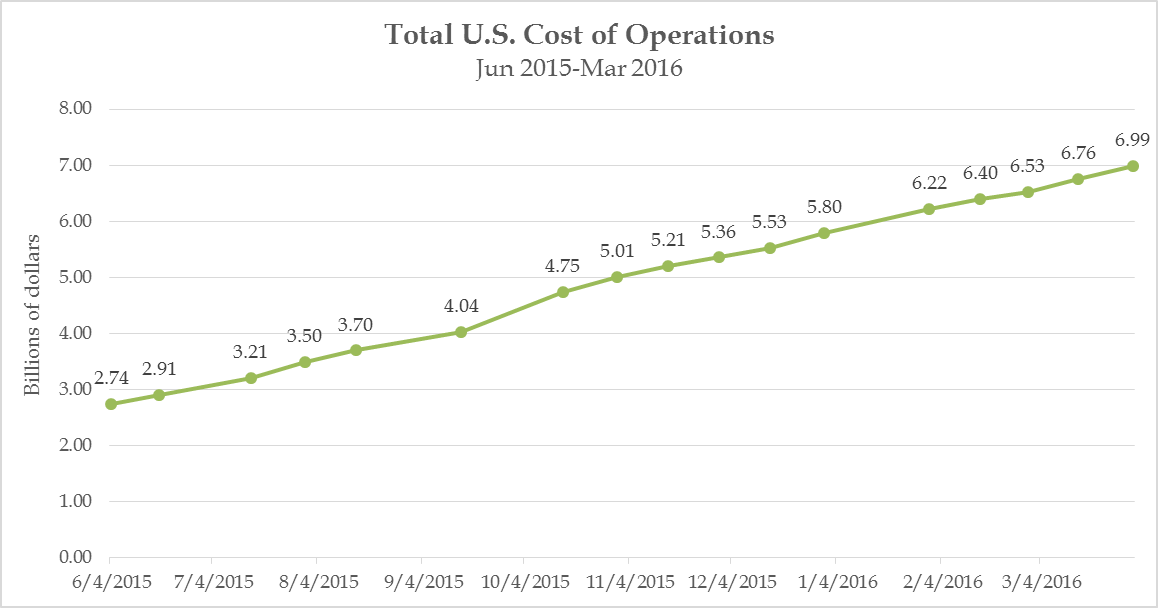 *Figures for April not yet available Click here for a complete timeline of U.S. policy on ISIS