Is America Ready for a Trade War with China?

China today announced its willingness to impose retaliatory tariffs on American imports if the Trump administration follows through on threats to place 25% duties on 50 billion dollars’ worth of Chinese products. The table is set for a noxious trade war. It’s time to move to the negotiating table, writes Robert Daly.

China today announced its willingness to impose retaliatory tariffs on American imports if the Trump administration follows through on threats to place 25% duties on 50 billion dollars’ worth of Chinese products. The table is set for a noxious trade war. It’s time to move to the negotiating table.

The pattern is familiar. President Trump, faced with a serious, long simmering provocation – China’s protectionist policies and coerced transfer and theft of U.S. intellectual property – escalates issues through harsh rhetoric and policy actions that are not quite as imminent or extreme as they sound before agreeing to parlay. The panic that ensues in worldwide media, bourses, and national capitols does not dissuade him. Whether these tactics can persuade China to alter its unfair practices – or North Korea to give up nuclear weapons, or Canada and Mexico to make concessions on NAFTA, or Republicans to fund a border wall – isunknown.

Negotiations will be long and hard. China will deal, but it won’t cave, for two related reasons:

China has risen and is now a peer competitor of the United States. It is the world’s largest trading nation, has the largest economy by some measures, and is home to the largest concentration of middle class consumers on earth. A trade war will hurt China, but can’t cripple it. It has alternate markets and suppliers. It also has a population that is probably more willing to suffer to achieve its ends than is America’s, in part because Chinese see the emergence of a Sino-centric Asia and the decline of U.S. power as inevitable. They think the numbers and historic momentum are on their side. China knows, furthermore, that many American allies who agree with Washington’s critiques are hesitant to support a Trump-led assault of China’s economic practices because they feel threatened or offended by the President on other fronts. America, in China’s eyes, is blind to its own weakness and isolation. The U.S. simply doesn’t have the throw-weight it enjoyed from the end of WWII until the Financial Crisis of 2008.

The Trump administration has labelled China as a rival and as America’s greatest long-term security challenge. The China Threat is said to be great, but it isn’t clear that Americans are willing to pay real costs to counter it, either in a trade war or in the South China Sea. Corporate lobbying has already watered down the CFIUS reform bill making its way through Congress. It is certain that, over the 30-day period of comment on President Trump’s proposed China tariffs, the administration will be inundated with visits from American planters, manufacturers, financial service companies, and local governments – many in Republican districts – who understand that China is a bad actor, but don’t want their own livelihoods harmed in the coming fray. Remember that most of the coerced technology transfers that Trump wants to put an end to were conducted in the full light of day and with the agreement of American companies that were willing to give away the family jewels for a shot at selling to the Chinese market. That market is much bigger now than when those deals were made, and those same companies still want to sell to it. They will argue, with some justification, that lost China sales will harm American jobs, profits, and competitiveness.

If China’s mercantilism, military expansion, and “predatory” lending policies are as dire a threat as Washington claims – and they may be – a painful price must be paid to combat them. Who wants to go first? 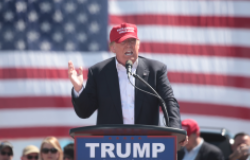 Video
Trade and Development
From Tariffs to Trade Wars?