Of all indicators that could be used to evaluate President López Obrador's first year in office, approval ratings are among his most favorable. El Financiero monthly national polls recorded an average approval rating of 80 percent from December 2018 to March 2019, the first four months, and then a remarkably stable level of support for the next eight months, averaging 67 percent. Poll aggregators offering numbers from various polling organizations show a similar pattern, and virtually the same average percentages. AMLO finished his first year with higher approval ratings than his three predecessors: Vicente Fox ended his first year with a 61 percent approval, Felipe Calderón with 64 percent, Enrique Peña with 44 percent, and López Obrador with 68 percent.[1]

AMLO's popularity comes as no surprise, considering that he won the 2018 election by a landslide, taking all but one of the 32 states in the country and 55 percent of the valid national vote. What has been more surprising to some is that AMLO's approval ratings have remained stable despite rising crime levels and a stagnant economy during the first year, just to mention the two most important problems that the country faces, according to the polls. When it comes to policy, public views tend to split. Some government policies and actions are quite popular, like the National Guard or the morning press conferences that keep AMLO in the public eye on a daily basis, both with more than 50 percent of favorable views. The public was also quite supportive when the President decided to deploy the National Guard to control the flow of migrants from Central America, partly in response to American President Donald Trump, who's negative ratings vary from 75 to 80 percent in Mexico. But in other policy instances, the public has clearly disagreed with AMLO: the cancellation of the new airport, the withdrawal of resources for day care centers, the cancellation of major social programs from previous administrations, the liberation of Ovidio Guzmán, El Chapo's son, after his temporary capture in Culiacán, and offering political asylum to Bolivia's former president Evo Morales, just to mention a few. Even symbolic gestures, such as suggesting that Spain should ask Mexico forgiveness for the conquest in the 16th Century, did not echo positively among the Mexican public. Despite these disagreements, the president's approval ratings for have remained high.

Why is AMLO so popular when some indicators of performance might suggest otherwise? One possible answer is that approval ratings may reflect, but are not necessarily, evaluations of government performance; they are measures of public support. Especially during the first year of government, it is likely that approval ratings carry more empathy, expectations, and hopes, than judgment or critical assessment. If this is so, a relevant question is whether the standards of appraisal may change later on. There is a possibility that the underlying meaning of presidential approval is not the same throughout a whole period of government, so variations in approval ratings may not only reflect how people feel about the president but also what standards they use to approve or disapprove his work. And those standards may also vary depending on partisan orientations. In Mexico, as in the United States, approval ratings are a strong expression of partisan identities and ideological leanings. From September to November 2019, AMLO's approval ratings were as high as 96 percent among Morena partisans, and as low as 36 percent among PAN followers, a significant gap of 60 points. Non-partisans, who represent the majority of citizens, expressed an average 66 percent approval in those months, basically tying the overall approval average of almost 68 percent.

Although presidential approval ratings are usually seen as an indicator of performance, they probably do not say as much about a president as they do about the public and its mood. High and low approval ratings do not necessarily mean good or bad governance, but simply, and for various reasons, high and low public esteem of government and political leadership. Presidential approval ratings may correlate with objective indicators of the nation's performance (for example, the gradual economic recovery after the 1995 economic crisis was accompanied by a steady increase in President Zedillo's approval ratings), but it is not always the case. As AMLO enters his second year as President, I suspect that the majority of the public may continue to be expectant and hopeful, rather than critical and demanding; but demanding results is beginning to show more strongly among certain demographic groups. That does not mean that approval ratings may drop soon: the polls show some groups are withdrawing some support to the president while others are increasing it. Recent polls show, for example, that more educated Mexicans have lowered their approval ratings, while lesser educated Mexicans are strengthening their support. The same happens with ideological leanings: those with tendencies to the right are becoming more critical and those on the left more supportive. We will have to see how all this evolves only measure by measure, to borrow and paraphrase a Shakespeare's phrase.

Probably misled by the concept of "honeymoon" effects (a period of wide public support for a new president developed from the American experience with measuring presidential popularity over many decades), some pundits in Mexico tend to believe--and seriously expect--that AMLO's approval ratings must to go down at some point. However, there is no convincing evidence of honeymoon effects with Mexican presidents, at least not during the last thirty years, when public opinion polls have regularly documented presidential approval ratings. Since 1989, only two of six presidents seem to have enjoyed something similar to a "honeymoon" with the Mexican public: Vicente Fox and AMLO. Two other presidents had an opposite opinion cycle: Salinas and Zedillo began their administrations with low public ratings in the polls, but they gradually gained support and finished their terms with approval ratings as high as 70 percent. So the "honeymoon" came later, not before, missing the whole point of being a honeymoon. The Calderón and Peña administrations marked different patterns to those previously observed. Calderón's approval ratings remained quite stable, hardly moving even in the context of a war against crime and a deep international financial crisis in 2008-2009. In contrast, Enrique Peña Nieto suffered the most dramatic fall in popularity recorded in Mexico since polls are conducted regularly, reaching low points below 20 percent in 2017, a year before the presidential elections. Certainly, that was contributing factor to AMLO's electoral victory in 2018.

AMLO will enter his government's second year with an interesting opinion phenomenon. As the attached graph shows, there has been a remarkable stability in his approval ratings and this gives us the idea that his popular support is calm and placid, at least in the surface. In deeper waters, however, there seems to be much more movement: some groups from different demographics, as well as partisan and ideological orientations, seem to be gradually withdrawing their support, while others are increasing it. This may be evidence that the public at large could be reflecting the polarization of the more informed and more politically intense subgroups. We will see how this evolves. 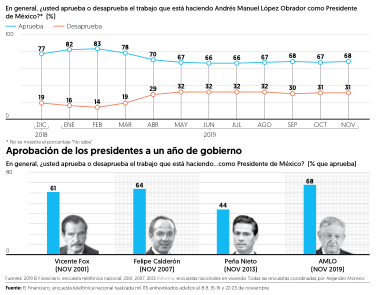 Alejandro Moreno is a Professor of Political Science at ITAM, Consultant/Director of Opinion Polls and Surveys at El Financiero, and Global Fellow at the Mexico Institute, Woodrow Wilson International Center for Scholars.

Opinions expressed here are solely those of the author.