Don't Give Up on Honduras

Cutting aid won’t keep migrants from leaving Honduras, and would threaten fragile and hard-won progress in the region

Cutting aid won’t keep migrants from leaving Honduras, and would threaten fragile and hard-won progress in the region

For months, thousands of Central Americans have been traveling north toward the U.S. border, their numbers increasing as word of the “caravan” spread along with hopes of gaining entry into the United States. President Donald Trump’s response to the caravan has been to militarize the border, attempt to change the laws regulating asylum seeking, and threaten that “no more money or aid will be given to Honduras, effective immediately” if the group is not turned back.

These responses are additional examples of the U.S. government’s increasingly hardline but shortsighted stance to the problems faced by Central America. In the last year, the United States has pushed for increased criminal prosecution of immigration offenses, including the separation of children from their parents at the border. We have also seen the elimination of Temporary Protected Status (TPS) for El Salvador, Nicaragua, and Honduras, and repeated threats to cut foreign aid to the region. These policies are intended to curb illegal immigration, but could in fact do the opposite.

Although Honduras remains a difficult place for many, progress has been made in Honduras in important areas such as education, health, violence reduction, and corruption.

Honduras faces serious challenges, including a high homicide rate, weak rule of law, and limited employment opportunities. This migrant caravan demonstrates Hondurans’ frustration with those problems. Although Honduras remains a difficult place for many, progress has been made in Honduras in important areas such as education, health, violence reduction, and corruption. This progress is significant but fragile, as political and economic elites who have pushed back.

Without firm and sustained international support, hard-won advances in Honduras could quickly be overturned. Threats to cut foreign aid put both reform efforts and those who promote them at risk. Now is not the time for the United States to blink, to cut off aid to Honduras, or to try to double our defense on the one-yard line. Now is the time to increase support for the real progress that has been made both in reducing violence and corruption. 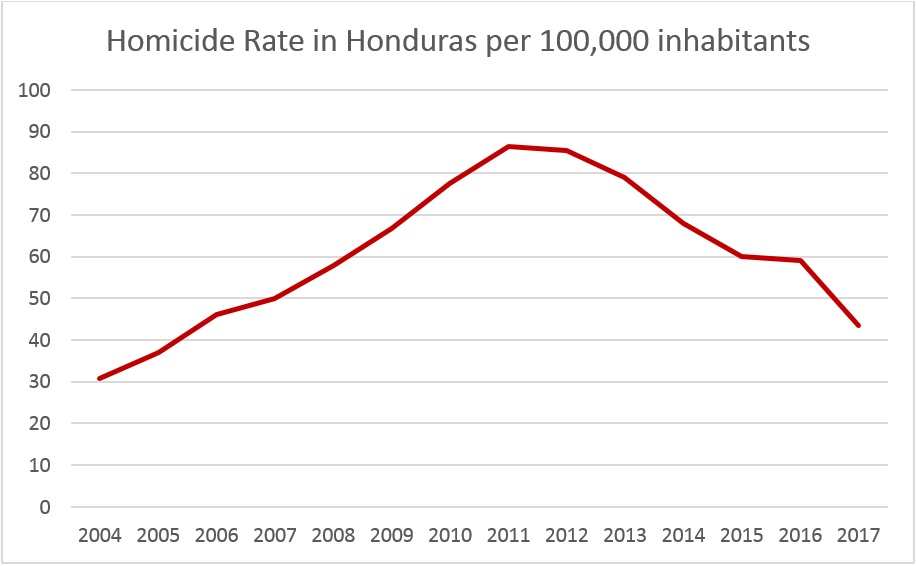 This drop can be attributed to a concerted effort of civil society, international donors, and government actors. For example, the Coalition against Impunity, comprised mostly of human rights organizations, has fiercely critiqued government inaction on anti-corruption and human rights matters, thereby holding judicial officials’ feet to the fire. The Alliance for Peace and Justice offers critiques of the government but is also willing to work with officials who show good faith. Both the Coalition and the Alliance serve as civil society’s version of a carrot and stick, to incentivize authorities to improve the justice system.

In 2016, after the New York Times released the names of Honduran police officers accused of colluding with drug traffickers, President Juan Orlando Hernández appointed a police purge commission made up of members of civil society. This commission has removed over 5,000 individuals from the 11,000-member force, replacing them with 8,000 new recruits trained through a year-long, rigorous program that relies on important investments from the United States, Switzerland, and the Inter-American Development Bank. 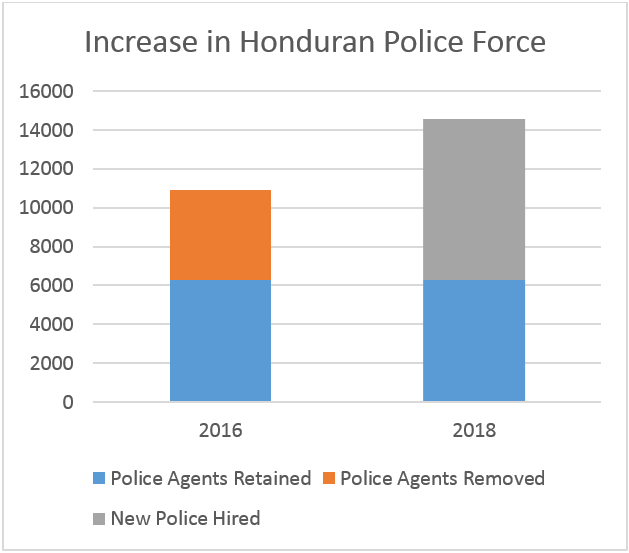 Both local and international organizations have worked closely with the Attorney General’s office helping to build capacity to fight drugs, organized crime, and corruption. An extradition agreement with the United States signed in 2012 was used for the first time in 2014, and since then 43 drug traffickers have been extradited or have turned themselves in to U.S. law enforcement, dismantling major criminal organizations in the country. Since 2015, the Honduran Attorney General’s office has seized over $1.5 billion in assets following arrests for drug trafficking and organized crime.

There is much more to be done in Honduras, and many significant challenges. Corruption remains an issue in the police, the courts, and the Attorney General’s office. Homicides have dropped but they remain high, and issues like gang extortion and domestic violence still are drastically underreported. But progress is being made.

Honduras’ President and Attorney General have put their support behind these positive changes because of both pressure and support from civil society and the international community.

Foreign aid helps to tip the cost-benefit analysis for politicians and leaders, showing them that if they do the right thing, the United States will have their back. Cutting aid to Honduras not only halts the positive change we are beginning to see; such a move also leaves those who have bravely taken on substantial risk to bring about change without the protection and international support that this aid provides.

Fragile Progress in Corruption and Transparency

Civil society involvement has also led to significant but fragile change in the arenas of anti-corruption and transparency, including important reforms in public education, medicine procurement in the public health sector, and the establishment of an international anti-corruption body.

Transformemos Honduras, a coalition of religious and nonprofit organizations, has exposed corruption in teachers’ unions and substantially reduced corruption and clientelism in the hiring of teachers and education administrators. Transformemos Honduras released evidence that 26 percent of Honduran teachers on the payroll were not in their assigned classrooms, and that Honduran schools managed just 125 class days per year. Those investigations led to reforms that resulted in returning teachers to their classrooms and increasing the school year to more than 200 days.

In 2015, the National Anti-Corruption Council, another civil society anti-corruption organization, began working on a corruption case involving over $300 million stolen from the Honduran social security system. The scandal spawned massive protests. One result of these protests was the establishment of the Support Mission against Corruption and Impunity in Honduras (MACCIH, in Spanish), part of the OAS’s secretariat for political affairs and special missions, and comprised of international experts brought in to investigate emblematic corruption cases in Honduras.

The MACCIH has spearheaded several key corruption investigations, including one against former First Lady Rosa Elena de Lobo, and the “Pandora” case, which implicates high-ranking members of Congress in acts of corruption. These cases have prompted fierce pushback by members of the elite, including a challenge to the constitutionality of the MACCIH, and legal reforms making it significantly more difficult to prosecute corruption.

Extradition, asset seizure, and preventative detention had previously been applied to drug traffickers and gang members without much pushback from Honduran elites, but once the MACCIH and Attorney General’s office began to focus on well-connected officials, prominent political and business elites reacted with force. One law approved by Congress in the wake of MACCIH’s cases required corruption cases to be first handled by an administrative auditing commission with a 7–10 year backlog of audits. This law virtually assures that new corruption cases will not make it to criminal court.

While the political pushback is frustrating, it is, ironically, an encouraging sign of progress. Corrupt government officials clearly feel threatened by the coordinated anti-corruption work led by civil society and supported by the international community and key government actors, such as the Attorney General’s office, the Anti-Corruption Unit of the Attorney General’s office (UFECIC), and the MACCIH.

Honduras’ progress against violence and corruption is currently in a vulnerable place. Civil society has lost some battles against corruption and violence, minority groups and activists continue to be in serious danger, and threats to human rights continue.

The MACCIH survived this last fight to be eliminated but did not emerge unscathed; it continues its work under some burdensome new requirements.

The MACCIH survived this last fight to be eliminated but did not emerge unscathed; it continues its work under some burdensome new requirements. It needs support, nationally and internationally, so that it can continue to battle the corruption of powerful elites. The United Nations is leading the country in a dialogue process after a controversial election in November 2017, but the process has been bogged down by political infighting and has made little progress. Meanwhile, under President Hernández, the executive branch has concentrated power and the country’s military continues to grow, with a budget increase of approximately 660 percent in five years, compared to a judiciary budget increase of only 160 percent.[2]

Despite these challenges, there is good news in Honduras. Brave civil society groups are advocating for and seeing institutional reforms which have resulted in real-life changes: halving the homicide rate, nearly doubling the days of school, and improving transparency in the purchase of medicines. Civil society leaders are putting themselves at risk. And they need international support as they work for advances that are in the best interest of both Honduras and the United States – confronting drug trafficking and criminal groups, and improving the lives and livelihoods of Hondurans who are so desperate that they would walk across a continent to try to make a better life elsewhere.

We can achieve a safer and more just Honduras. But this requires sustained investment in rule of law, anti-corruption, and systemic reform measures. Making progress toward these objectives requires international interest and accountability as well as a sign from the United States that it will stand by those who work on behalf of these reforms.

James Nealon was U.S. Ambassador to Honduras from 2014 to 2017.  He is currently a Wilson Center Global Fellow.

Kurt Alan Ver Beek, a sociology professor at Calvin College, has lived in Honduras since 1988 and is co-founder of the Association for a More Just Society.

The views and opinions expressed in this article are those of the authors and do not reflect the official policy or position of the Wilson Center.