In 2018, from November 26 to 28, the São Paulo Research Foundation (FAPESP), the Wilson Center's Brazil Institute, and the City University of New York (CUNY) hosted FAPESP WEEK NEW YORK. The symposium aims at strengthening the links between scientists from Brazil and United States with the objective of promoting research partnerships.

To see the full program of FAPESP Week 2018, including the speakers' powerpoints and related articles, click here.

THE BRAZIL INSTITUTE AND FAPESP

Starting in October 2011, the Brazil Institute established a partnership with the São Paulo Research Foundation (FAPESP) to promote and highlight the expanded cooperation on science and innovation between the United States and Brazil. A three day symposium was held at the Wilson Center as part of FAPESP Week, in celebration of the Foundation’s 50th anniversary. A follow up symposium titled “Brazilian Nature and Our Scientific Partnerships” took place in February 2012 at Ohio State University, in Columbus. As a result of the success of the first symposium at the Wilson Center in 2011, FAPESP and the Brazil Institute have co-sponsored FAPESP Week ever since.

FAPESP is aware that the very best research can only be done by working with the best researchers internationally. Therefore, it has established partnerships with funding agencies, higher education, private companies, and research organizations in other countries known by the quality of their research and has been encouraging scientists funded by its grants to further develop their international collaboration.

The State of São Paulo has a population of 44 million and generates 32% of Brazil’s GDP. Under the State Constitution 1% of all state taxes are appropriated to fund FAPESP, which was put in motion in 1962.

The stability of the funding and the autonomy of the foundation allow for an efficient management of the resources that has had a sizable impact: while São Paulo has 22% of the Brazilian population and over 30% of the scientists with a doctorate in the country, the state responds for 44% of the country’s scientific articles published in international journals.

Within this context, in 2016 FAPESP applied $ PPP 533.9  million in scholarships and grants.

In accordance with the Foundation’s funding objectives, 39% of expenditure was earmarked for advancing knowledge, 8% was dedicated to supporting research infrastructure and 53% was allocated to supporting application-driven research.

THE GRADUATE CENTER OF THE CITY UNIVERSITY OF NEW YORK

The City University of New York (CUNY) is the nation's leading urban public university. Founded in 1847, it boasts 13 Nobel Prize and 23 MacArthur ("Genius") grant winners among its alumni. CUNY students, alumni and faculty have garnered scores of other prestigious honors over the years in recognition of historic contributions to the advancement of the sciences, business, the arts and myriad other fields. The University comprises 25 institutions and servers more than 275,000 degree-seeking students.

The Graduate Center of CUNY is a leader in public graduate education devoted to enhancing the public good through pioneering research, serious learning, and reasoned debate. The Graduate Center offers students more than 40 doctoral and master's programs of the highest caliber, taught by top faculty from throughout CUNY.

Through its nearly 40 centers, institutes, and initiatives, including its Advanced Science Research Center (ASRC), The Graduate Center influences public policy and discourse and shapes innovation. The ASRC elevates scientific research and education at CUNY and beyond through initiatives in five distinctive but increasingly interconnected disciplines: environmental sciences, nanoscience, neuroscience, photonics, and structural biology. The ASRC promotes a collaborative, interdisciplinary research culture with renowned researchers from each of the initiatives working side-by-side in the ASRC's core facilities, sharing equipment that is among the most advanced available. 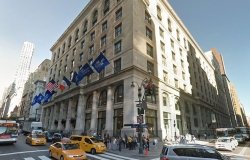 Blog post
Digital Assets
Cryptocurrency as the New Frontline in the Russian Invasion of Ukraine
By Alan N. Rechtschaffen on March 1, 2022
External link
Science and Technology
Washington Post: The West has gotten savvier about Russian disinformation. Will that help Ukraine?