Argentina finds itself in yet another International Monetary Fund program, after President Mauricio Macri went hat in hand to the Fund in May 2018 for a bailout. His decision marked a turning point for his presidency, trading gradualism for austerity, at the cost of a deep recession and a steep decline in his popularity.

Now that the program is on the rocks, and IMF skeptics seem headed back to power in Argentina, observers are concerned about the potential impacts on the IMF’s reputation and lending capacity.

There is reason to fear backlash in Argentina against the Fund.

Since joining the organization in 1956, Argentina has had 22 IMF programs. Yet all those loans and their associated reforms failed to prevent Argentina from suffering the most recessions in the post-war era of any country except the Democratic Republic of the Congo.

As a result, Argentines have thoroughly soured on the Fund, which is widely regarded as an imperialist agent pushing neoliberal policies that favor local and foreign elites.

In particular, the IMF is remembered bitterly for its role in Argentina’s 2001 economic crisis. Late that year, the IMF withdrew its support for Argentina’s $22 billion program by withholding a $1.2 billion payment. In December 2001, lacking access to other credit, Argentina defaulted on its $100 billion debt, the largest sovereign default in history at that time.

In 2003, Néstor Kirchner became president of a country only just recovering from its catastrophic crash, with the poverty rate at 65 percent. He blamed the IMF, deriding the emergency lender as a “promoter and vehicle of policies that provoked poverty and pain for the Argentine people.”

To break Argentina from its dependence on the IMF, reduce the fiscal strain of servicing Argentina’s debt, and regain access to credit markets, Mr. Kirchner pushed an ambitious debt restructuring.

A key player in the negotiations was his finance secretary, Guillermo Nielsen, who led negotiations with creditors and eventually engineered an agreement with the majority of bondholders that involved a deep “haircut,” extended maturities, and new bonds tied to economic performance.

The deal left out a group of “holdout” bondholders whose litigation against Argentina would bedevil the country for another decade. In the meantime, however, it gave Mr. Kirchner considerable fiscal breathing room – and the confidence to prepay fully Argentina’s $10 billion IMF debt using foreign exchange reserves in December 2005. The costly but symbolically important repayment, Mr. Kirchner said, helped “gain back degrees of freedom for national decisions,” and buoyed the president’s popularity.

Today, 14 years after that decision, familiar faces from the Kirchner team are likely returning to government. Mr. Fernández, the leading presidential candidate, was Mr. Kirchner’s chief of staff and an active participant in the debt renegotiation and IMF relations. Mr. Nielsen is among Mr. Fernández’s top advisers.

Throughout his presidential campaign, Mr. Fernández has capitalized on the widespread distrust of the IMF. “Those who generated the crisis – the government and the IMF – have the responsibility to end it and reverse the social catastrophe,” he said. He has consistently criticized Argentina’s IMF program, promising to “rework” its conditions.

But Mr. Fernández’s relationship with Mr. Nielsen has calmed investors, who expect a pragmatic approach to an inevitable debt restructuring and to negotiations with the IMF.

Although blaming the IMF is popular among his base, Mr. Fernández no doubt realizes alienating the Fund could seriously harm Argentina’s economy – and leave the country once again isolated internationally. Indeed, he has reassured the Fund that “there’s no possibility Argentina will fall into default if I’m president.”

That message was surely welcomed by IMF stakeholders. After all, Argentina’s $56 billion loan represents a sizeable portion of the Fund’s outstanding loans. But when push comes to shove, the next Argentine government might have no choice but to play ball with the IMF.

Unlike Mr. Kirchner, Mr. Fernández would almost certainly have to deal with the IMF for the entirety of his term. He would not have the luxury of a commodities boom to fill government coffers, and any hope of reentering capital markets would require remaining on good terms with the Fund.

That does not mean the relationship will be easy.

Whereas Mr. Kirchner achieved “degrees of freedom” from the Fund, Mr. Fernández will need to negotiate flexibility, given his coalition’s penchant for heterodox economic policies, including price and wage controls, and a record of overspending.

But the timing is right for a bargain: neither Argentina’s new president nor a new IMF managing director would want to start their tenure with a high-stakes standoff or embarrassing default. 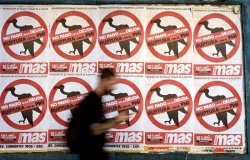