NPIHP is pleased to announce the international conference The Historical Dimensions of South Africa's Nuclear Weapons Program, organized and hosted by Monash South Africa, in collaboration with the Institute for Security Studies, (ISS Africa) and NPIHP.

Held in Pretoria, South Africa, from 9-11 December 2012, this landmark conference explored nearly every aspect of South Africa's nuclear development from the post-war era to the recent past.

Following welcoming and opening remarks by NPIHP partner Anna-Mart van Wyk and co-directors Christian Ostermann and Leopoldo Nuti, the conference opened with a practical, research-oriented presentation by former South African National Defence Forces Archive official Rene Geyer, who provided a broad overview of the kinds of historical documents that are available for researchers in South African archives. Archival access in generally good, especially for the pre-1970 period, while South Africa's Public Information Act provides a mechanism by which researchers can obtain new documents through declassification requests. A large number of declassified South African documents--including many from the post-1970 period--will be included in the free, online document reader prepared in connection with this conference.

The purpose of the first full panel was to place the South African nuclear program in regional and international context. Presentations by Chris Saunders, (University of Cape Town) Sue Onslow, (Institute of Commonwealth Studies, University of London) and Anna-Mart van Wyk (Monash South Africa) explored the regional factors in South Africa's security calculus which influenced the decision to develop, and then renounce, nuclear weapons. David Holloway (Stanford University) discussed how South Africa's nuclear history does, and does not, fit into the larger Cold War narrative.

Subsequent panels explored specific aspects of South Africa's nuclear history in great detail. Expert participants presented on how South Africa's massive natural uranium deposits influenced its relations with the UK and US in the early part of the nuclear era (Lucky Asuelime, University of KwaZulu Natal, South Africa), as well as how it participated in the United States' Atoms for Peace program (Mara Drogan, Siena College), played a major role in the establishment and evolution of the IAEA (Jo-Ansie van Wyk, University of South Africa), but was ostracized within the agency in the 1970s and 1980s (Elisabeth Roehrlich, University of Vienna), collaborated closely with Israel in military and nuclear affairs (Sasha Polakow-Suransky, The New York Times), had little-known nuclear relations with Brazil (Carlo Patti, Fundacao Getulio Vargas) and Iran (Mohammad Homayounvash, Florida International University), and was influenced by international developments following India's nuclear tests in 1974 and 1998 (Samuel Rajiv, Institute for Defence Studies and Analyses), as well as by the secret US-Israeli understanding on the unacceptability of overt nuclear testing (Or Rabinowitz, Kings College London).

Two of the most noteworthy and mysterious aspects of South Africa's nuclear history were discussed in the panel on the Kalahari and Vela incidents. Panelists James G. Hershberg (the George Washington University) explored the evolution of the campaign of international diplomatic pressure which was sparked by the Soviet Union's discovery of a South African nuclear test site in the Kalarhari desert in August 1977, and its decision to share this information with the West. Frank Pabian (Stanford University) touched upon the intelligence and technical aspects of the so-called Kalahari incident using open source and imagery analysis.

Likewise Leonard Weiss (Stanford University) and Avner Cohen (Monterey Institute for International Studies) discussed the September 1979 Vela incident, in which a U.S. satellite observed what appeared to be a nuclear detonation in the South Indian Ocean near Prince Edwards Island. Both agreed that based on the available evidence a nuclear test almost certainly took place, that it was likely an Israeli test, and that it was likely carried out with South African logistical support. This hypothesis was supported by an in-depth presentation on the evolution of South Africa's nuclear energy and nuclear weapons programs by Johan Slabber, frequently described as being among the 'fathers of the South African bomb.' In his talk, Slabber made it clear that in 1979 South Africa could not possibly have been in a position to test a nuclear device of its own, as it lacked sufficient highly enriched uranium at the time.

While especially illuminating on the so-called Vela incident, Slabber's presentation was effectively a personal narrative encompassing the period of his involvement in the South African nuclear program from the late 1960s through the early 1980s. This account explained how the failure of South Africa's early, abortive effort to design a sodium-cooled heavy water reactor allowed South Africa's reactor physics team to be directed to focus instead upon the engineering dynamics of nuclear explosives. This earnest effort, in the early part of the 1970s, to explore the possible engineering uses of peaceful nuclear explosives, Slabber explained, formed the basis for South Africa's subsequent nuclear weapons program.

In August 1977, following the international condemnation that resulted from the Kalahari incident, Slabber and his colleagues received a directive to develop the ability to conduct a nuclear test at 24 hours notice. Presumably South Africa's leadership sought the ability to demonstrate its nuclear capability during a crisis with sufficient speed to prevent foreign interference. Consequently, Slabber reported, in 1978 South Africa conducted a cold (no nuclear yield) test of a nuclear device using natural uranium.

The nuclear explosive design effort proceeded in parallel with a project to learn how to enrich uranium using a unique jet-nozzle technique. By the late 1970s the enrichment program met with two yars of delays as engineers worked to resolve a persistent problem which led the jet nozzles used in the enrichment process to become clogged. By roughly 1981, the enrichment problems had been overcome and South Africa's first nuclear device was completed. Slabber's involvement with the program ended here, but over the next decade South Africa would go on to produce a total of 6.5 nuclear weapons.

In order to disseminate the results of the conference to the broadest possible audience, organizers plan to publish the results in a special edition of a peer reviewed journal or in an edited volume. The conference document reader--a compendium of over 800 pages of archival documents on South African nuclear history from South Africa and other countries which were contributed by conference participants--will be published online on the NPIHP website. 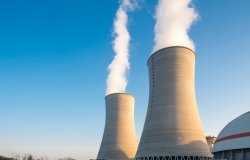 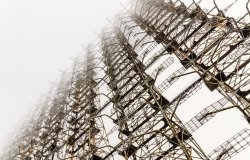 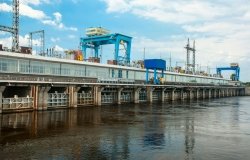 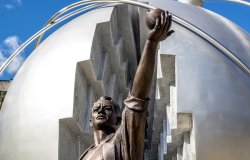