ISIS Losses By the Numbers

By early 2016, the Islamic State - also known as ISIS, ISIL, or Daesh - had faced severe setbacks. Although ISIS remained entrenched in its strongholds, more than a year of U.S. and coalition airstrikes had diminished the group's infrastructure, number of fighters, finances, and social media presence. On February 25, President Obama said that ISIS was under "severe pressure." But he also emphasized that the only way to defeat ISIS is to "end the chaos and civil war that has engulfed Syria."

Secretary of State John Kerry suggested that ISIS's attack in Brussels, Belgium on March 22, along with its threats to carry out more attacks in Europe, reflected the group's battlefield losses in Iraq and Syria. "The very reason that Daesh is resorting to actions outside of the Middle East is that its fantasy of a caliphate is collapsing before their eyes," he said in Brussels on March 25. "Its territory is shrinking every day, its leaders are being decimated, its revenue sources are dwindling, and its fighters are fleeing." By late March, Iraqi troops had launched an offensive on Mosul, seeking to recapture the key ISIS stronghold. The following facts and figures summarize ISIS losses by early 2016.

#CJTFOIR airstrikes are having a huge impact on anti-ISIL operations in Iraq and Syria #InherentResolvepic.twitter.com/oypzTqVzdG

New ISW #ISIS Sanctuary Map. ISIS loses in some areas but strikes back in others. https://t.co/9o7dZxICKBpic.twitter.com/uHzKouPs5q 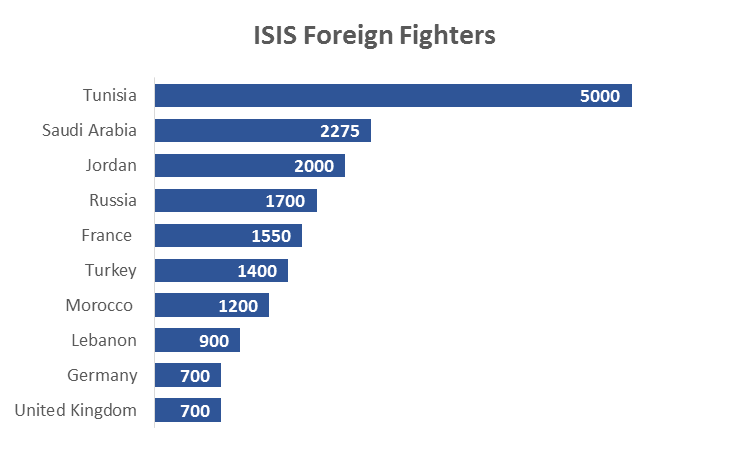 Source: Unless otherwise noted, facts and figures are from Special Presidential Envoy for the Global Coalition to Counter ISIL Brett McGurk, who testified to the House Foreign Affairs Committee on Feb. 10, 2016.