The Arab Spring was launched in Sidi Bouzid, a remote Tunisian town. On Dec. 17, 2010, a government inspector demanded a bribe from Mohammed Bouazizi, a 26-year-old street vendor who supported a mother, uncle and five siblings by selling fruit from a cart. When Bouazizi refused to pay, the inspector confiscated his produce and equipment. Bouazizi sought aid at government offices. After he was rebuffed, he covered his body with paint thinner and set himself on fire in front of the provincial governor’s office.

On October 23, Ennahda, a moderate Islamist party, won the national elections and formed a coalition with two secular parties. Into 2012, the new government attempted to control protests and violence throughout the country as thousands rallied for and against a more conservative religious government.

Over the next year, Tunisia was deeply divided over the new order, as the elected assembly worked on a new constitution. Ennahda took halting steps on reforms, alternately addressing diverse segments of Tunisian political society. It pledged not to introduce Islamic law in the new constitution, but also filed a bill to prosecute offenses against “sacred values.” In June 2012, former Prime Minister Beji Caid Essebsi formed the secular Nidaa Tunis party to challenge Ennahda in 2013.

To ease the political crisis, Ennahda handed over power to an interim government in October 2013, which was tasked with organizing new elections. The following year, secular parties edged out Islamists at the polls. In the October 2014 parliamentary elections, Nidaa Tunis won 85 seats compared to only 69 secured by Ennahda. Essebsi, the head of Nidaa Tunis, was elected president in December.

The new government encountered challenges, including attacks by Islamist militias. In March 2015, gunmen stormed Tunisia’s National Bardo Museum and killed 24 people, including 20 foreigners. In June, a gunman killed 39 foreigners at a beach resort in Sousse. As a result, the government announced a series of security measures and declared a state of emergency across the country.

Dec. 28: In a televised address, President Zine al Abidine Ben Ali promises job creation but warns that protesters will be punished. He fires the communications, trade, and handicrafts ministers and the governors of rebellious provinces, including Sidi Bouzid.

Jan. 13: President Ben Ali promises not to run for office again in 2014, to allow press freedom and to cut the price of basic commodities. He also vows that legislative elections will take place in six months. But he imposes a state of emergency, which prohibits groups larger than three from congregating. In a countermove suggesting the military is abandoning Ben Ali, Gen. Rachid Ammar orders the army not to shoot at protesters and to protect them from police.

Jan. 17: A caretaker government is formed until elections can be held. The next day, four opposition members quit the interim government, and the president and prime minister quit the long-ruling Constitutional Democratic Rally (RCD).

Jan 19 – 26: In central Tunis, hundreds of protesters, organized by the trade union movement, call for the dismissal of ministers affiliated with Ben Ali.

Jan. 21: The RCD dissolves its leadership committee, approves an amnesty law for political prisoners, and promises to recognize all formerly banned political parties.

Jan. 23: The interim government shuts down the oldest and most popular private television network.

Feb. 7-March 9: New Interior Minister Farhat Rajhi orders the RCD to shut down its activities. It is formally disbanded on March 9. The interim government votes to allow interim President Fouad Mebazza to rule by decree. It also calls in the army reserves to provide more security after widespread police desertion.

Feb. 13: Italy announces it will send its army to help stabilize Tunisia after thousands of Tunisians flee to Italy.

Feb. 15: The Interior Ministry extends the state of emergency but ends the curfew imposed by Ben Ali in January.

April 1: The Justice Ministry announces 18 legal cases against Ben Ali, which include charges of voluntary manslaughter and drug trafficking.

May – July: Every Sunday, people protest nationwide for further reforms.

May 26: Election officials recommend that elections be delayed until October 23 to allow more preparation and voter registration.

May 27: The Group of 8 industrialized nations pledges billions in aid to Tunisia, with more promised if democratic reforms continue.

June 20: Ben Ali and his wife Leila are convicted in absentia of theft. Both are sentenced to 35 years in jail and fined $66 million.

June 24: The interim cabinet adopts laws allowing lawyers to organize and banks to check the records of amnesty beneficiaries. The laws also create a committee to manage frozen assets for the state.

July 15 – 17: Protesters and police clash in Tunis and various other cities.

Oct. 9: Protesters attack a TV station for showing Persepolis, which features scenes representing God talking to a young girl. They also protest at the main university against a ban on women wearing the full black niqab, which shows only the eyes. Dozens are arrested.

Oct. 14 – 16: In Tunis, thousands protest the Persepolis screening, and thousands respond with calls for press freedom.

Oct. 23: In parliamentary elections, Ennahda wins 89 of 217 national assembly seats, with over 90 percent turnout in some areas. Among 49 women elected, 42 are from Ennahda. The party forms a coalition with two non-religious parties, Ettakatol and the Congress for the Republican Party.

Nov. 15: Ennahda Secretary General Hamadi Jebali refers to the new government as the sixth Muslim caliphate, leading the Ettakatol Party to suspend its participation in the new governing coalition. It later returns after being promised powerful government positions.

Nov. 18: Jebali is chosen as the coalition prime minister.  Moncef Marzouki of the Congress for the Republic Party is nominated for president. And Ettakatol’s Mustafa Ben Jaafar is named speaker of the National Assembly. They are sworn in Dec. 13.

Nov. 28 – Jan 24: Islamist students occupy Manouba University for four days to demand that male and female students be separated, triggering strikes at state universities and protests outside parliament. The Islamists, demanding that women be allowed to wear face veils at school, continue a month-long sit-in that prevents classes and exams from taking place.

Dec. 14: President Marzouki asks for a six-month political truce and a moratorium on strikes and protests, promising to resign if reforms are unsuccessful.

Jan. 14: Thousands march to commemorate the one-year anniversary of their protest movement.

March 2 – April 25: Protesters conduct a sit-in outside Wataniya, the state television network, protesting corruption and calling for publishers of pro-Ben Ali propaganda to be fired.

March 20: On the 56th anniversary of Tunisia’s independence from France, thousands march in Tunis to call for a civil state.

March 24: At a conference attended by 60 political parties, Former Prime Minister Essebsi criticizes Ennahda and calls for a viable alternative.

March 25: Thousands protest in Tunis for the creation of an Islamic state.

March 26: The Ennahda Party announces that Sharia law will not be codified in the new constitution.

May 1: In the first ruling on the death of a protester, two Tunisian policemen are sentenced to 20 years in prison for killing a youth during the January 2011 protests.

May 5: The government extends the state of emergency until the end of July 2012.

May 11: The government licenses a Salafist political party for the first time in the country’s history.

May 20: Thousands rally in Kairouan in support of Ansar al Sharia, a hardline Islamist group.

May 18 – 27: Salafists in Sidi Bouzid and other towns burn alcohol warehouses and police stations. They threaten the owners of alcohol stores with violence if they don’t shut down.

May 29: Judges begin an indefinite strike to protest the firing of dozens of magistrates by the state on suspicion of corruption and ties to Ben Ali’s regime.

June 12 – 15: In Tunis, Salafists riot, protesting an art exhibit that they claim is offensive. One man is killed, 62 policemen are injured, and 160 protesters are arrested. A curfew is imposed.

July 16: Ennahda reelects Rachid Ghannouchi, a moderate, as its leader.

Aug. 13: In Tunis, thousands protest against a constitutional article that would lower women’s status.

Sept. 7: Thousands of supporters of the Ekbes political movement, which means “get a move on,” march in Tunis. They call for purging the media and political sphere of former regime remnants and “counter-revolutionaries.”

Sept. 12-14: Tunisians protest an anti-Islam film in front of the U.S. Embassy in Tunis. On Sept. 14, Salafis storm the compound, burn the American flag and start fires before Tunisian security forces disperse the crowd.

Sept. 21 and 27: Ennahda leader Rached Ghannouchi vows to crackdown on Salafis.  The following week President Marzouki pledges to do the same.

Feb. 25: Thousands protest the appointment of Ali Larayedh, an Ennahda hardliner, as the new prime minister.

March 11: Larayedh forms a new cabinet, handing over key posts to political independents in an effort to reduce tensions.

April 18: Secular politicians submit a motion of no-confidence against President Marzouki after he criticizes “secular extremists.”

Oct. 5: Ennahda agrees to hand over power to a caretaker government led by independents. Mehdi Jomaa is later named prime minister of the interim government.

Jan. 27: Parliament passes a new constitution, the first since Ben Ali was ousted in 2011.

March 6: President Marzouki lifts the state of emergency that had been in effect since the 2011 uprising.

July 20-Aug. 22: The government closes mosques and radio stations affiliated with hardline Islamists, in response to the July 17 attack. 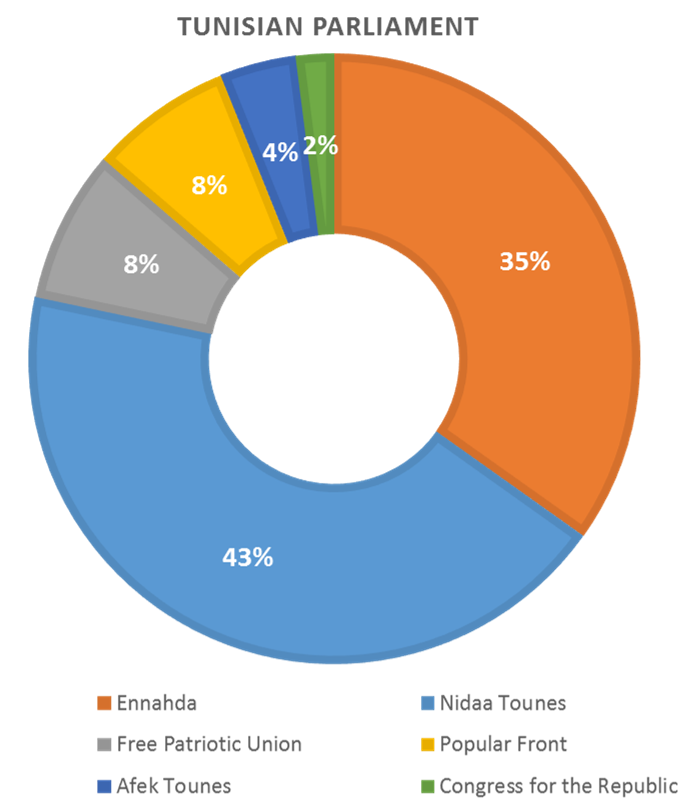 Dec. 21: Essebsi wins the presidential elections in a run-off, securing 55.7 percent of the vote.

June 26: A gunman kills 39 tourists at the Tunisian beach resort of Sousse.

July 6: President Essebsi declares a state of emergency in response to the Sousse attack. 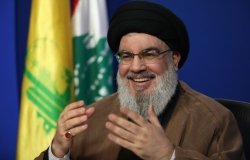 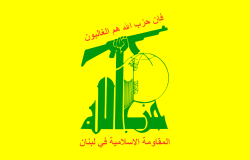