Jane Goodall Explores the Links Between Conservation and Human Health

"We often forget that we humans are part of the animal kingdom," remarked world-renowned primatologist Dr. Jane Goodall during this Director's Forum. It is because of this connection that we are both vulnerable to the damage we inflict on the environment.

Humans share about 99 percent of our DNA structure with chimpanzees, a fact that according to Jane Goodall, we often forget at our own peril. In this Director's Forum, the world-renowned primatologist expressed an urgent concern for the survival of our planet and its animal kingdom, along with a sense of hope that humans have the capacity to find alternatives to our destructive ways.

Goodall focused her remarks on two burgeoning problems in Africa that are rapidly depleting wildlife populations: deforestation and the bushmeat trade. The deforestation around Gombe National Park, where she first studied the chimpanzees in 1960, is almost total. "It was very clear upon further investigation that the land around Gombe was being asked to support far more people than it possibly could," Goodall said.

In 1994, the Lake Tanganyika Catchment Reforestation and Education Project, or TACARE, was established to combat deforestation and poverty by focusing on community socio-economic development and sustainable natural resource management. Specifically, the program trains and enables villages to plant tree nurseries and to reclaim over-farmed land to make it fertile again. TACARE also provides education on primary health care and HIV/AIDS, and encourages women's education and economic empowerment. Education, Goodall said, is the first step towards "helping the people to understand that as the environment is destroyed, so their own life becomes increasingly hard and difficult."

An even greater threat to wildlife in Africa, according to Goodall, is the bushmeat trade, or the commercial hunting of wild animals for food. She explained how the logging companies opened up the forests by building roads that hunters now use to shoot practically any and all wildlife, including antelopes, monkeys, chimpanzees, elephants, and gorillas. They dry the meat in the sun and then sell the meat to the urban elite, who are willing to pay more for bushmeat than for more sustainable food like goats or chickens.

Hope for the Future

Goodall concluded her remarks by describing the success of Roots and Shoots, the Jane Goodall Institute's global environmental and humanitarian education program for youth. Now with more than 7500 groups-- from preschool through university-- in more than 90 countries around the world, the program seeks to foster respect and compassion for all living things, promote an understanding of all cultures and beliefs, and inspire each individual to take action in order to make the world a better place for the environment, animals, and the human community. "There is not much point in doing this conservation work, in talking about saving our forests--if we are not at the same time devoting huge amounts of energy to raising young people to be better stewards than we have been."

To watch Dr. Goodall's entire presentation, see the link at right for the video. Below is the transcript of a very powerful story illustrating the connection between humans and animals.

The Story of Jo-Jo the Chimp

I wanted to share one last story before I introduce you to the JGI team. It's about a chimpanzee who was born in Africa, whose mother was shot when he was about two years old, because there used to be a strong trade in live animals, and chimpanzees were taken from the wild by shooting the mother for entertainment and zoos and medical research and what have you.

He was shipped to a North American zoo where he was named Jo-Jo, and for about 15 years he lived by himself in a small old-fashioned zoo cage with a cement floor and iron bars. Then a new zoo director decided to build a large enclosure, and he bought 19 other chimps. The enclosure was surrounded by a moat filled with water because chimps don't swim.

Then one of the new young males decides to challenge the senior male. Well, the senior male is Jo-Jo. You have to learn how to behave from your society and Jo-Jo hadn't had the opportunity. He was so little when he was captured. So when this young male starts swaggering and bristling, and standing upright and hurling rocks, and looking very intimidating, Jo-Jo is absolutely terrified, and he runs into the water because he doesn't know anything about water either.

He manages in his fear to get over the barrier that is built to prevent the chimps from drowning in the deep water beyond. Three times he comes up gasping for breath, and then he is gone. On the other side of the moat is a little group of people, not many, because it was cold and wet. There was a keeper, who knew that Jo-Jo weighed 130 pounds and that male chimps are much stronger than us and can be dangerous, so he ran off to get a stick to try to pull Jo-Jo out of the water.

But luckily for Jo-Jo there was a man who visits the zoo one day a year with his wife and his three little girls, and he jumped in. In spite of a keeper grabbing onto him, saying that he would be killed, he pulled away. He had to swim under the water. He felt Jo-Jo's body, and he got this 130-pound dead weight over his shoulder. He managed to get over that barrier and he could feel small movements. Jo-Jo wasn't dead yet. And so he pushes him up onto the bank of the enclosure and then turns to re-join his slightly hysterical family.
Well, there was a woman there with a video camera, so you see and hear what happened next although the camera is all over the place because the woman did not even realize she was filming. The people on the banks suddenly start screaming at Rick to hurry back, that he is going to be killed, because they can see from their higher vantage points three of the big males coming down to see what all the commotion is about. At the same time, Jo-Jo is sliding back into the water because the bank is too steep.

And again, he pushed Jo-Jo up and continued to push him, ignoring the approaching chimps, ignoring the screaming people. Jo-Jo is desperately struggling to grab onto something. Just in time, he gets hold of a thick tuft of grass, and with Rick pushing, manages to get onto the level ground. And just in time, Rick get back over that barrier.

That evening, that little piece of video was flashed across North America and the then-director of JGI USA saw it. He called up Rick Swope and he said, "That was a very brave thing you did. You must have known it was dangerous. Everyone was telling you. What made you do it?" And Rick said, "Well, you see, I happened to look into his eyes, and it was like looking into the eyes of a man, and the message was, ‘Won't anybody help me?'"

If you see that look with your eyes, and you feel it in your heart, you have to jump in and try to help. Although the world today perhaps has more problems, more danger than ever before, I do believe it's true that there are more people, more little NGOs and special interest groups, more than ever before. Everywhere we have one of these problems, there is sure to be a group of people, or even one person giving so much, to try and put that problem right. And that is where I feel hope. 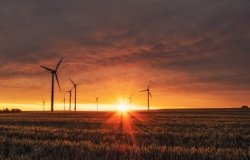 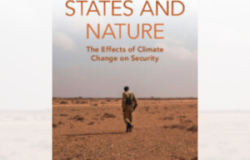 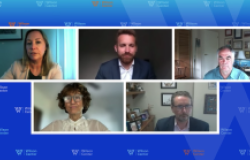