Moment of Truth for U.S. on Climate Pact

In just a few days, U.S. President Donald Trump is expected to announce a decision on whether to pull the country out of the landmark Paris Agreement on climate change, a step he promised on the campaign trail. But the pact to slash greenhouse gas emissions will live on, with or without the United States’ participation, says Roger-Mark De Souza in this edition of Wilson Center NOW – and the geopolitical ramifications of that fact are among the factors that may be giving the Trump Administration pause. 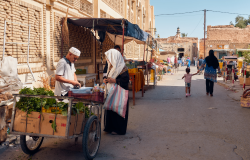