On December 3, the Woodrow Wilson Center's History and Public Policy Program, in cooperation with the Institute of National Remembrance in Poland, will host an exhibition opening commemorating the 20th anniversary of the fall of the Berlin Wall.

The exhibition, Polish People's Republic—So Far Away and So Close By, consists of 47 panels of photographs that depict key events in Polish history from 1944 to 1989. The exhibition first opened in 2004 in the Polish city of Kraków at the initiative of the Public Education Office of the Institute of National Remembrance in Warsaw.

The exhibition will be on display at the Woodrow Wilson Center in the Memorial Hallway from December 3, 2009 to January 31, 2010. Admission is free and open to the public.

Jerzy Eisler, director of the Warsaw Branch of the Institute of the National Remembrance and professor of history at the Polish Academy of Science, along with Agnieszka Rudzinska, deputy director of the Institute's Public Education Office will introduce the exhibit. His Excellency Robert Kupiecki, Ambassador of the Republic of Poland, will provide additional remarks. 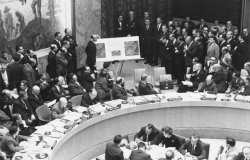 Article
Call for Papers - “Divided Together?” International Organizations and the Cold War
February 4, 2020