Poll: US Attitudes on Muslims

More than 60 percent of Americans have a favorable view of Muslims, according to a new poll sponsored by the University of Maryland. Only around 44 percent, however, have a favorable view of the Muslim religion. Additionally, around one third of respondents in the recent poll said that militant Islamist ideology was the most important motivating factor for Omar Mateen, the gunman who declared allegiance to ISIS and killed more than four dozen people in Orlando, Florida in June. The survey was completed between June 24 and 30, with a representative sample of 1,312 people. The following are key findings from the poll. 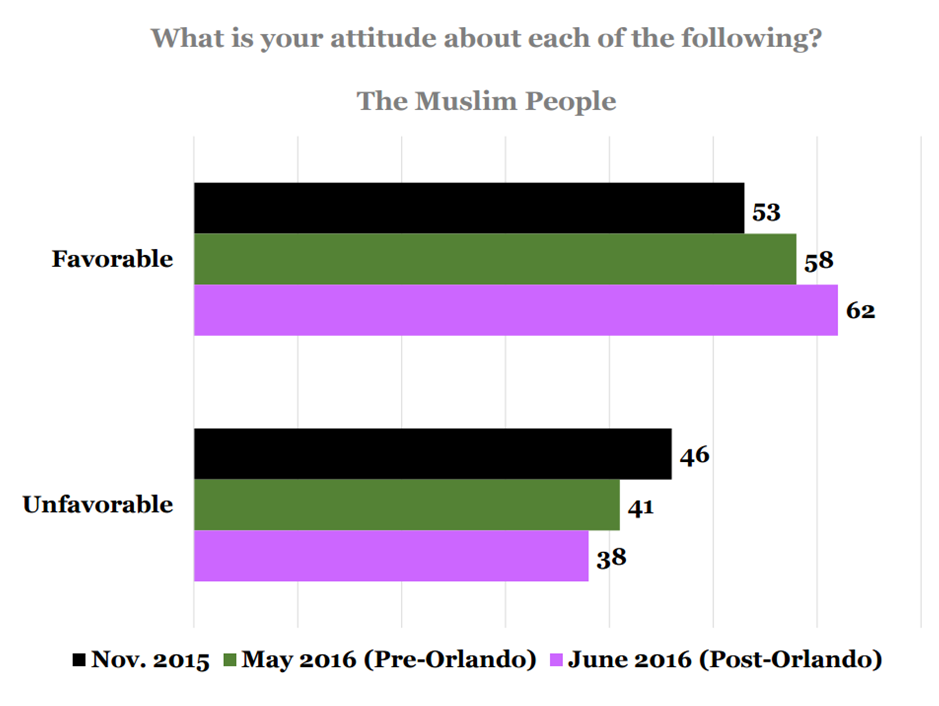 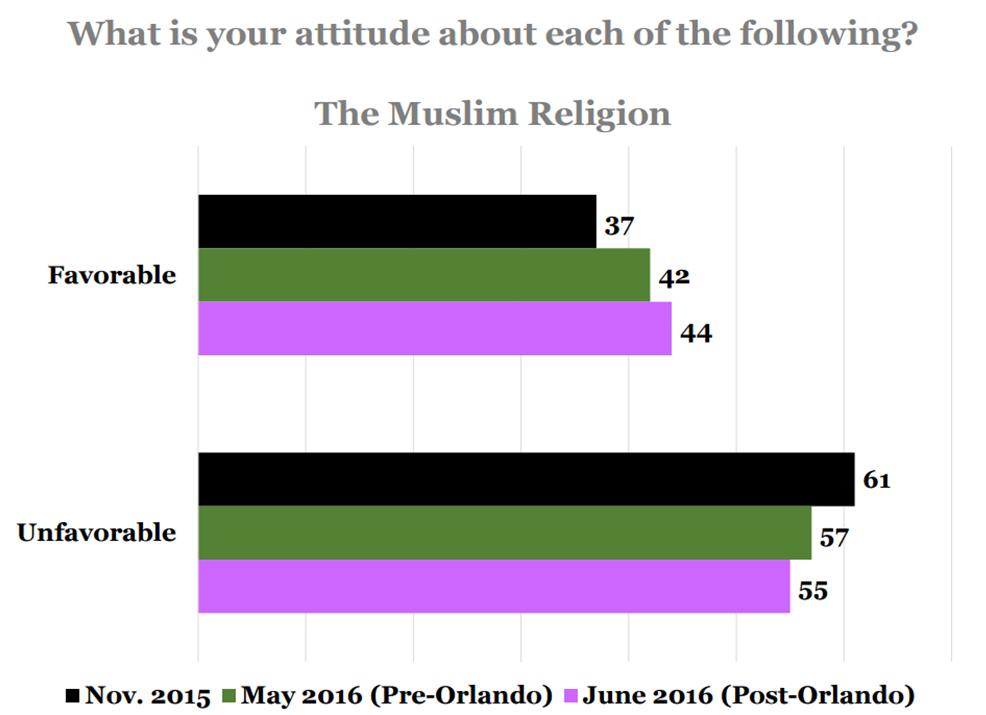 Take Away: Remarkably, despite heated campaign rhetoric on Islam and Muslims, and the Orlando shooting, attitudes toward Islam and Muslims have become progressively more favorable from November 2015 to June 2016, and more Americans have come to say that Islamic and Western traditions are compatible over the same period.

From November 2015 to June 2016, Americans views on Muslims have gone from 53% favorable to 62% favorable, while Americans with favorable views of Islam have increased from 37% to 44% in June over the same period. During that same time frame, the percentage of people who think that Islamic and Western religious and social traditions are compatible increased from 57% % to 64%.

Republican attitudes have remained relatively constant in the three polls (November 2015, May 2016, and post-Orlando June 2016) toward both the Muslim people and the Muslim religion. And a majority of Republicans continued to express the view that Islam and the West are incompatible, with little change across the three polls. But the views of both Democrats and Independents became more favorable toward both Islam and Muslims (Democrats jumped 12% and Independents jumped 17% from November 2015 to June 2016 in their favorable views of Muslims), while fewer Democrats and Independents have come to view Islamic and Western values as being incompatible, for example, Democrats dropped from 26% to 17% in viewing these two as incompatible. 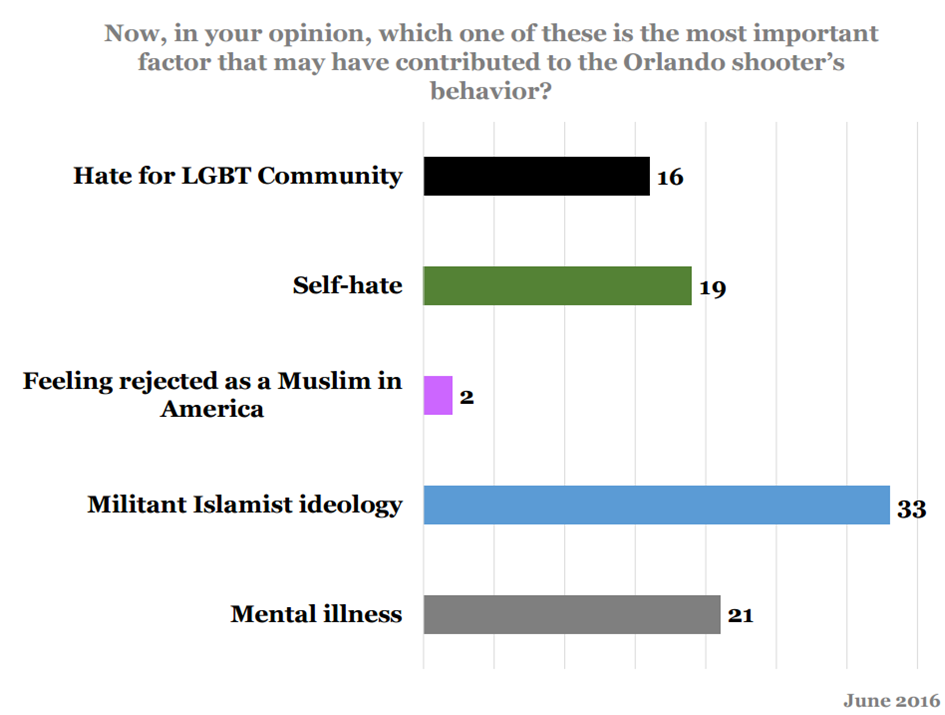 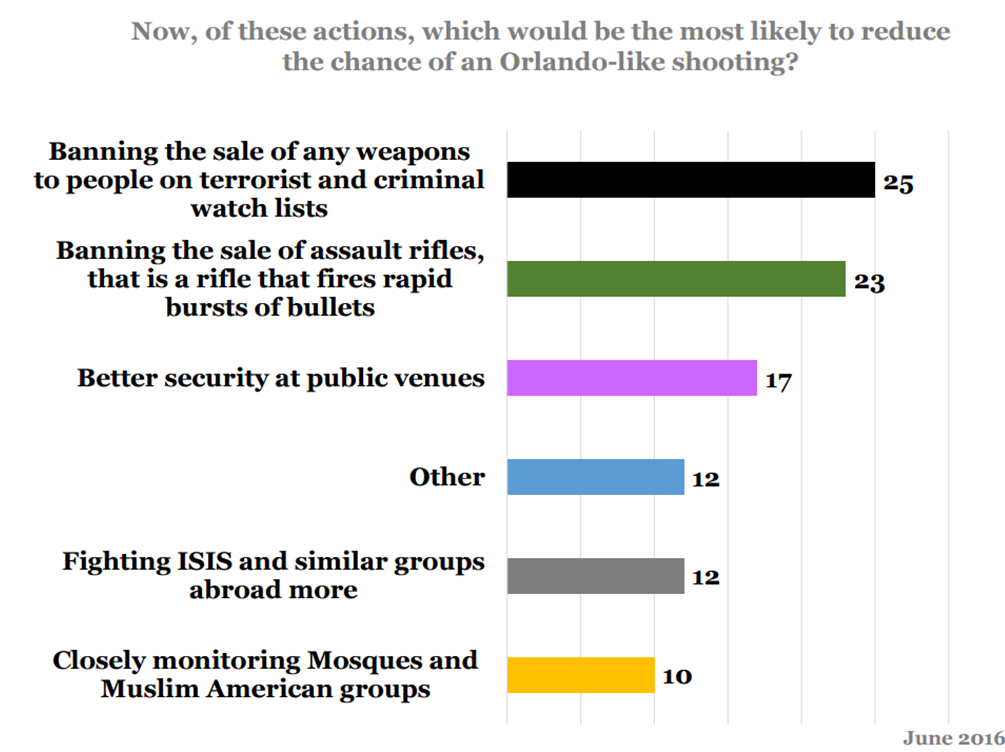 Take Away: Only one third of respondents said militant Islamist ideology was the most important factor motivating the Orlando shooter. Ending sale of guns to terrorists/criminals ranks first among steps that would reduce the chance of a similar attack; monitoring Mosques/Muslim American groups ranks last.

Fifty-seven percent assessed that the shooter acted independently, but was inspired by ISIS ideology, while 34% said he acted for reasons unrelated to ISIS, but claimed link for boasting. Only 8% said they said he was directed by ISIS.

Fifty-two percent approved of President Obama’s reaction to the shooting, compared to 50% for Hillary Clinton and 42% for Donald Trump.

Similarly, when directly asked what the most likely action would be to reduce the chance of an Orlando-like shooting, banning the sale of weapons to terrorists/criminals is ranked first with 25% of the responses, while closely monitoring mosques and Muslim American groups ranked last with 10% of responses.