Paula Ganga is a George F. Kennan Fellow with the Kennan Institute. She has focused her research on the economic and democratic trends of Eastern Europe and Russia's influence in the region. We recently asked her to share more about how she became interested in her research topic and how it is relevant in today's world.

For the past academic year, I’ve been a post-doctoral fellow at the University of Rochester where I worked with the Skalny Center for Polish and European studies. I have taught two classes, one each semester, dealing with political economy issues in developing countries including former Communist countries and also one class on populism.

I came to the Wilson Center because I saw it as a great place to take my international experience and apply it to my research. Working at an institution like the Wilson Center, which has departments that focus on so many different regions, is a wonderful opportunity to me. I’ve been able to interact with fellows who deal with a variety of issues and I have used their insight to inform my research.

The Wilson Center’s wonderful combination of both in-house knowledge and events, as well as its location in Washington D.C., has allowed me to pursue my research in a way that I couldn’t at other institutions. 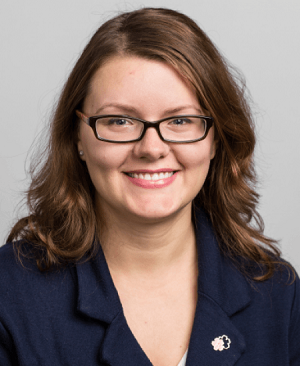 My research looks not only at the longer—term history of Eastern European countries, but also their recent history and how that matters to the United States. Eastern European countries went through tremendous economic and political transformations with the rise and fall of communism. However these transformations—though successful for a while—turned into illiberal transitions. Countries such as Poland or Hungary democratically elected leaders that later turned more autocratic and decided to curtail judicial independence and media criticism. Trying to figure out what explains these new regimes transformations I explore the Russian influence in the region. Could Russia’s presence in Eastern Europe explain some of these illiberal regimes? I looked at the economic, security, media and foreign policy dimensions in the transformations in Eastern Europe and whether Russia plays a role.

In my own country of Romania, the government went through a massive project of giving land to peasants in the late 19th century. My family benefitted from that program which resulted in increased economic development. Then the Communist regime reversed these reforms and nationalized all private property. After the fall of the Soviet Union, an even larger program was adopted to return nationalized lands to the original owners throughout the 1990s. Eastern Europe in a way is like a big experiment where property rights regimes switched back and forth throughout the past century. I grew up hearing stories about these huge traumatic events in people’s lives. As I started studying more deeply political and economic processes, I noticed these changes happened as waves on a global scale, not just in Eastern Europe. I wanted to dive deeper into these waves of state policy and economic affairs.

That was how I came to examine the recent illiberal waves I use as case studies in my research. This recent wave is moving some states away from market-based processes and more towards state involvement in economic affairs. In some countries the state is making a comeback, both in economic issues and in everyday life. So, those stories I used to hear and experiences I had as a child feel very relevant today and inform my research.

Q: Why is your research relevant?

Illiberalism is understandable but also worrisome. It is understandable because in many parts of Eastern Europe and the world, the promises of 21st century politics never came to fruition. The transition to democracy and market processes in Eastern Europe promised the kinds of economic development as in the highly developed countries in the West. As those promises didn’t materialize, more and more voters started listening to the political messages of populist politicians. While this backlash to the transitions in the 1990s is understandable, the way it has been utilized is problematic. A lot of those countries elected leaders who are now increasingly authoritarian and illiberal in their actions. Do all populists turn into illiberal leaders? Not necessarily. Does unlimited power corrupt? Yes. There’s a very fine line to walk between upholding democratic and liberal values and the desire for power.

Populist leaders are problematic because in an effort to exert authority over domestic politics, they can end up enacting reforms that could result in silencing critics, the opposition, the media, or judges that rule against them. Many populist leaders espouse the idea that if they were elected, then they represent the people. Therefore, the European Union or other international actors cannot dictate what they do domestically. In their eyes, “the people elected us, we have the mandate, and we can conduct internal affairs the way we want. If that means replacing judges as we decide, we can do that because we were elected, and that means the other countries cannot frown upon us. We are a sovereign nation.”

The shift in understanding sovereignty—which now means the ability to say no to international pressures even when those are affecting democratic development—can be seen as a backlash to the 1990s when many economic and political reforms were being directed by international actors. Both leaders and regular people often felt like the most crucial decisions affecting the country and their lives weren’t in their hands.

Frankly, one of the more worrisome trends in the places that have seen populist leaders get elected, maybe even multiple times, is that after a while, the opposition gets shut off to resources. They don’t have enough resources to continue their activity or even to run for elections. We want people to have that chance to choose a different alternative if they don’t like whoever’s in charge, and we need that alternative to stand in elections because if you have a very weak opposition, the chance of regime change is non-existent.

Rapidly changing regimes are highly unpredictable. When countries no longer share the same values such as a commitment to democracy, independence of the judiciary, and free and fair media, all of a sudden conducting discussions in other areas like security or economics is no longer as easy because frictions spill over from disagreements on democratic values to other critical areas of cooperation.

These changes matter to the United States’ position in the world and also dictate whether the world is friendly toward U.S. values. An increasing number of authoritarian or illiberal regimes destabilizes the world for everyone.