A majority of both Libyan men and women prefer Islamic law to be adopted as a main source of governance rather than the sole source, according to a new survey by the International Foundation for Electoral Systems (IFES). Some 54 percent of women think Sharia law would improve women’s rights, compared with 68 percent of men.

A majority of both Libyan men and women prefer Islamic law to be adopted as a main source of governance rather than the sole source, according to a new survey by the International Foundation for Electoral Systems (IFES). Some 54 percent of women think Sharia law would improve women’s rights, compared with 68 percent of men. But 14 percent of women, twice the percentage of men, believe Sharia would worsen women’s rights.
IFES also found a wide gender gap in civic participation and voter turnout. More than 71 percent of Libyan women are interested in politics and government. But 22 percent fewer women voted in the 2012 elections than men. And the majority of women were unwilling to express their opinions on political or social issues by protesting, signing a petition, posting on a social media platform, or contacting a public official or the media. Yet 82 percent of women in both rural and urban areas would support female candidates. The following are excerpts from the report.

Women in Libya have a high level of interest in matters of politics and government with over 71% saying they are very or somewhat interested in these issues. Similarly, Libyan women voted in high numbers in the General National Congress (GNC) elections in July 2012, with 66% of women surveyed having participated in the election. However, their voter participation rates were 22 percentage points lower than men’s. This suggests there is a large gender gap in voter turnout. The data also shows that older women, women with no formal education and women in rural areas tend to have lower-than-average voter turnout. This implies better strategies could be used in voter motivation campaigns to target these segments of society, and may help boost voting levels among women in general and women belonging to these demographic groups.
Women who participated in the GNC elections reported voting free of pressure; however, women were more likely to vote in line with their spouse/family’s choice, whereas men were more likely to have an independent choice.

Libyan women’s civic engagement is limited both in absolute terms and in comparison to their male counterparts. The Status of Women Survey gauged this type of engagement through a series of questions on taking part in different types of civic activities and through an assessment of membership in different types of organizations.
In contrast to their relatively high levels of participation in the elections and their interest in matters of politics and government, data shows that very few women take part in any type of civic activity to express their views on social and political issues, with only 20% of all women in Libya reporting taking part in such activities in the past 12 months. The data shows that civic engagement increases with educational attainment and drops as women get older. Interestingly, women in the Eastern region of Libya that comprises Benghazi and neighboring areas are the most civically active with 46% reporting taking part in activities to express their views relative to much lower rates among women in other regions.

While slightly more women than men show concerns about the impact of Sharia on women’s rights, both Libyan women and men seem to agree Sharia would improve women’s rights. However, a focus group project that IFES implemented in Libya in November 2012 suggests Libyans show enthusiasm to the idea of adopting Sharia without necessarily having an in-depth knowledge of its implications on women’s rights and women’s roles vis-à-vis men.Consequently, debates about the role of Sharia should ensure there is a common understanding among various stakeholders of what the application of Sharia means for women’s rights. Further, work done by civil society groups and other stakeholders working to promote women’s rights must ensure Libya lives up to its obligations as a signatory to the Convention on the Elimination of All Forms of Discrimination Against Women (CEDAW). 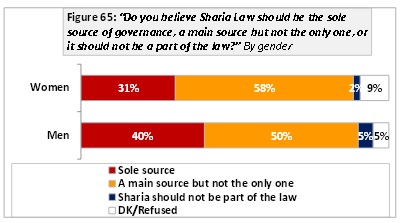 Overall, despite challenges that may deter progress on women’s issues, Libyans are essentially optimistic about women’s rights in the future. Women seem more cautious than men in assessing the status of women, expressing more uncertainty regarding their expectations about their own rights in the future. This shared optimism, however, suggests an opportunity to generate support to enshrine and promote women’s rights by incorporating Islamic and international law.