Skip to main content
Support
Explore More
Close
Event
Democracy
Revolution and Women's Rights: The Case of Egypt
On June 15, 2011 at 10:30 – 11:45
Share on FacebookShare on TwitterShare via Email
SharePrint
Article

Ripples of the Arab Spring: Revolt and the Role of Women

Pro-democracy rebellions have erupted across the Middle East since December 2010. The Wilson Center's Middle East Program continues to hold meetings to explore effects in different countries and among different groups, including women. Events included a June event in which three female panelists participated in the Wilson Center session from Egypt, via Skype.

Pro-democracy rebellions have erupted across the Middle East since December 2010 in what has become known as the Arab Spring. Revolutions—first in Tunisia, then in Egypt—resulted in the ouster of long-time dictators. Civil unrest and protests have raged on from Yemen to Bahrain, from Libya to Syria, and beyond.

While the impetus for these revolts was and is dissatisfaction with the autocratic regimes and the accompanying government corruption, many other grievances have factored into the protests. They include human rights violations; high unemployment; huge gaps between rich and poor and expanding poverty; disgruntled youth; and the lack or shortage of basic infrastructure and services.

As activism sweeps through the region, one common vehicle for expressing discontent has been the use of social media, particularly Facebook and Twitter, used to raise awareness of the issues and mobilize millions to rally.

Tunisia is heading toward elections this fall. At a recent Middle East Program (MEP) event, Nazeh Ben Ammar, president of the Tunisian American Chamber of Commerce, said he hopes the new constitution reflects the will of the people because of the increased engagement of youth in politics through social media outlets. He said a trigger point was the high unemployment rate among young, educated people, such as one disgruntled Tunisian, Mohamed Bouazizi, who set himself ablaze, sparking the revolution that then sent shock waves and inspiration for similar revolts across the region.

When former Lebanese Prime Minister Fouad Siniora visited the Wilson Center in May, he noted the dramatic changes driven by popular protests that brought down decades-old regimes within days by breaking through previously entrenched fears of expression. He also said this is an opportune time for the United States to engage in the region in an effort to deter frustrated people from radicalism.

Bahrain's Minister of Finance Shaikh Ahmed Al-Khalifa recently addressed a Wilson Center audience and stressed that democratization is a process and denied that Bahrain was in violation of human rights.

MEP continues to host programs that highlight various issues and angles of the Arab Spring, featuring speakers from around the region. Two recent MEP events focused on the role of women in the region. One of these meetings, on June 15, featured three women panelists in Egypt communicating with a live Wilson Center audience via Skype.

In Egypt, while millions of men and women joined the movement to oust the regime and replace it with a democratic one, "women were the backbone of the protestors," said Zainab Al-Suwaij, executive director of the American Islamic Congress in Washington, at the June 15 meeting, "Revolution and Women's Rights: The Case of Egypt." When Internet and cell service was shut down, she said women helped get information out of the country via their home phones. She said many women, much like the men, were targeted by authorities and arrested by police.

Amany El-Tunsy, an Egyptian publisher, author, and women's rights activist, was one of three panelists in Cairo who called in via Skype. In 2008, she founded a women's radio station, Banat wi Bas (Girls-Only) radio. The first of its kind in the Arab world, the station now boasts 5 million subscribers.

El-Tunsy said when demonstrations started, she went to Tahrir Square to interview women about their aspirations. She used her radio station to urge women to come to Tahrir Square and "see the new Egypt."

Also via Skype, Manar Mohsen, a 20-year-old human rights activist, student, and journalist in Cairo, said "Tahrir Square was phenomenal. This was the Egypt everybody wanted and believed in, but we didn't know we could get it." Heading to the rally, she feared harassment but saw and experienced only dignity and civilized protest. She was arrested at the rally and said the interrogator told her that reporting on it was "bad for tourism." Still, Mohsen spoke with optimism, saying that women are thinking outside the box, challenging norms, and through their actions, many will succeed.

Dalia Ziada, a blogger and Egypt office director of the American Islamic Congress in Cairo, took a pessimistic view of the future of women's activism. She said the extremists, the Salafis, discriminate against women. Meanwhile, democracy is viewed as the priority and women's rights secondary. She recounted that some men encouraged women protesters to go home, that "when we're done with democracy, we'll try for [your rights]." Since the revolution, she said the situation has progressively worsened for women, who are increasingly being marginalized. Women's groups are protesting but she said they need help and a vision for inclusion.

Panelists agreed many women activists are disappointed to realize that women's rights and participation are being excluded in the democracy movement. Mohsen said education must be the foundation upon which change is realized. There are many NGOs, women's organizations, and social media networks, but these groups lack cohesion, organization, and experience, a difficulty the panelists believe will be overcome in time.

On June 2, Lilia Labidi, minister of women's affairs of Tunisia, and Moushira Khattab, former minister of family and population in Egypt, discussed the role and expectations of women in the Egyptian and Tunisian revolutions and beyond.

Labidi, also a former Wilson Center fellow, said the participation of women in the protests in Tunisia offered hope; women were not sidelined but marched alongside men and also played a vital role in disseminating information and images around the world about the protests. The future of women's participation in the public sphere is uncertain, Labidi said, but she is encouraged by the new parity resolution calling for an equal number of men and women for each party in Tunisia's July 24 elections. She is also encouraged by the opportunities afforded by an increase in political pluralism and media outlets.

As Tunisia's minister of women's affairs, Labidi discussed her efforts aiding women living in poverty, changing the cultural role of women, and boosting confidence in the government's ability to address women's needs. She hoped that recent events in the region will encourage recognition of women as political actors.

Khattab, also former Ambassador of Egypt to the Republic of South Africa, the Czech Republic, and Slovakia, commented on the role of women in Tunisia and in Egypt, noting that many advances have yet to be made for women, youth, and other groups, but the protests have begun a change toward "a democratic, rights-based Egypt."

Although she views women's involvement as progress, Khattab described the obstacles to freedom that women in Egypt still face. She expressed concern that the politics of revenge against the previous regime might sideline women in politics, who already have less representation in the government than they did under Mubarak. She noted the need to change social perceptions that "women already enjoy all their rights." Khattab also discussed how new media freedoms give fundamentalist groups a platform to propagate narrow interpretations of faith that call for repealing some of the existing women's rights laws.

Across the Arab world, panelists agreed, women's participation in public demonstrations and disseminating information to the media has set in motion major advances toward the rights of all citizens.

Special thanks to Sara Girgis, Rachel Peterson, and Laura Rostad whose reporting contributed to this article. 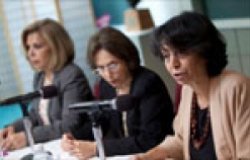