The Islamic world is rife with political diversity, from ultraconservative monarchies to new democracies. But two places reflect the escalating rivalry over an ideal Islamic state in the 21st century: The Islamic Republic of Iran, predominantly Shiite, was born of a revolution against centuries of monarchical rule. The Islamic State, purely Sunni, was born out of war in the modern nations of Iraq and Syria.

The Islamic world is rife with political diversity, from ultraconservative monarchies to new democracies. But two places reflect the escalating rivalry over an ideal Islamic state in the 21st century: The Islamic Republic of Iran, predominantly Shiite, was born of a revolution against centuries of monarchical rule. The Islamic State, purely Sunni, was born out of war in the modern nations of Iraq and Syria.

On the surface, the two have the same goal – a pure, idealized government based on Sharia law. Both have global visions. Yet the two Islamic systems differ in political systems, economic life, culture and, most of all, the role of religion. They are also now enemies that basically want to destroy each other. The Islamic State, also known as ISIS or ISIL, regards Shiites as apostates who should be killed to pave the way for a purer form of Islam. Iran views ISIS as a terrorist group and has taken a leading role in confronting the Islamic State.

The ISIS "caliphate," declared in July 2014, practices a rigid Salafi interpretation of Sharia. It has no constitution. No country recognizes its borders, which include about one third of both Syria and Iraq. It has vowed to fight any state or group that does not share its rigid worldview. It is a member of no international organizations. It persecutes all other faiths and forces conversion. Its economy relies on smuggling oil, extortion, kidnapping and financial aid from Salafi supporters in the Arab world.

The Islamic Republic of Iran, which celebrates its 36th anniversary this week, is predominantly Shiite. It has a republican constitution, which blends Napoleonic laws from France and Belgium with Islamic law, although its human rights violations, economic corruption and social discrimination are well-documented by international watchdogs. It has recognized borders. It is a member of the United Nations and several international organizations. It recognizes most (but not all) other faiths and provides proportionate representation in parliament. The economy relies heavily on energy and international trade.

ISIS has no rule of law or due process by international standards. It carries out the most severe forms of punishment allowed under Islamic law, known as hudud. Common practices include flogging, stoning and amputation. It carries out executions, sometimes in public, by beheading, crucifixion and even burying or burning prisoners alive. It has engaged in mass executions, some broadcast on social media. It takes foreign hostages, particularly aid workers and foreign journalists.

Iran has a constitution that lays out legal rights for its citizens and a sophisticated court system for criminal and civil trials. But additional courts for anti-Islamic behavior allow for prosecution and imprisonment on vague charges. Iran allows lengthy detention without charges or access to lawyers; some detainees have died in jail. It has detained foreigners too; it held 52 American diplomats 444 days shortly after the revolution. The penal code practices hudud, including stoning. Executions tend to be hangings, sometimes in public. More than 600 people were reportedly executed in Iran in 2014, according to a Human Rights Watch estimate.

Islamic State leader Abu Bakr al Baghdadi (left) has vowed that Muslims around the world should be united “under a single flag and goal.” ISIS is aggressively trying to conquer territory. It has called on Muslims worldwide to either immigrate to the Islamic State or pledge allegiance to it. Militant groups in more than 10 countries, including Libya, Egypt and Algeria, have publicly declared support for the Islamic State. 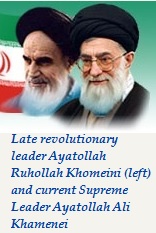 In the revolution’s early days, Iran ambitiously sought to export its revolutionary ideology among both Shiites and Sunnis. It particularly condemned monarchies. "We shall export our revolution to the whole world," Ayatollah Ruhollah Khomeini pledged. "Until the cry 'there is no god but God' resounds over the whole world, there will be struggle." But Iran’s only territorial dispute is with the United Arab Emirates over three small islands in the Gulf. It instead cultivates spheres of influence in Shiite communities, notably in Iraq and Afghanistan, although its goal has not been to gain territory. It has poured hundreds of millions of dollars into groups with common causes, such as Lebanon’s Hezbollah and Hamas and Islamic Jihad in the Palestinian Authority.

The Islamic State has forced females back behind the veil and actively discouraged them from education, work and even appearing in public. It actively recruits women to move to the territories of Iraq and Syria it now controls. Ten percent of its Western recruits are reportedly female. Jihadist social media portray the Islamic State as an idyllic Islamic society and an alternative to life in the West. But media accounts and testimony of women who have escaped indicate women experience violence, rape, forced marriage, and general repression.

In Iran, women have opportunities in higher education, most professions and high-ranking political positions. They hold seats in parliament, run their own businesses, attend universities and participate in (segregated) sports. They are mandated to wear modest Islamic dress, although styles are not as restrictive, and women do not need a male escort to leave their homes. According to the constitution, “the government must ensure the rights of women in all respects, in conformity with Islamic criteria.” But women face serious discrimination in areas such as divorce, inheritance, and child custody. A woman, regardless of her age, needs her male guardian’s consent for marriage. Women also require permission to obtain a passport and travel abroad.

The Islamic State has little tolerance for religious minorities. It has tried to cleanse its territory of people it deems unbelievers, including Shiites and non-Muslims. It has reportedly killed hundreds of Shiites and Yazidis, among others. The militants have also destroyed property belonging to minority groups, including ancient holy sites. In late 2014, ISIS distributed a pamphlet attempting to justify the kidnapping, enslavement, and rape of non-Muslim women and children.

Iran has not attempted to wholesale convert, expel or kill its religious minorities. The constitution provides for representation of Armenians, Assyrian and Chaldean Christians, Jews and Zoroastrians. Some minorities are considered “People of the Book” and are thus entitled to protection and some autonomy in religious practices. But Baha’is are not protected under the law, are not allowed to practice their faith, and have faced persistent persecution.

ISIS has been hit hard since a U.S.-led international coalition launched airstrikes in August 2014 to back up local militias in Iraq and Syria. The United States claims more than 6,000 ISIS fighters have been killed, although ISIS has also recruited more than 20,000 foreign fighters to supplement its local forces. Short-term, ISIS appears capable of holding large swaths of territory, with support from Sunnis who feel marginalized by the governments in Baghdad and Damascus. However, its long-term viability is uncertain.

Iran has had tense relations with the Sunni countries, notably Saudi Arabia, and the West since the 1979 revolution. But since October 2013, Iran has engaged in intense diplomacy with six major powers – the United States, Britain, China, France, Germany and Russia– on its controversial nuclear program. Despite international sanctions and frequent diplomatic showdowns over the years, Western nations no longer consider supporting regime change in Tehran.

This article originally appeared on Newsweek.

Cameron Glenn writes for The Islamists Are Coming, hosted by the Woodrow Wilson Center for Scholars.

Garrett Nada is assistant editor of the Iran Primer hosted by the U.S. Institute of Peace. He is on Twitter: @GarrettNada.

The views expressed are their own.

Article
Terrorism
Iran’s Islamist Proxies in the Middle East
May 20, 2021

Article
US: On Second Anniversary of ISIS Fall
March 24, 2021