She is One Episode 3: Parity Through Diplomacy

Behind every statistic, there is a story to tell.

An initiative of the Women in Public Service Project, She is One is sharing the stories of the women behind the numbers. Join the conversation using #SheIsOne.

In this episode, the Ambassador of Finland to the United States, Kirsti Kauppi discusses what it’s like to be a woman working in foreign relations, what it means to be visible, and the differences between the United States and Finland in gender equality efforts and government institutions.

Kauppi said she never planned to become an ambassador, but that it was always important to her that she find a job that she was passionate about. “If I didn’t feel I was interested in the job, I always tried to remain true myself,” said Kauppi, “Even if there were options for promotion, if I didn’t feel like I was interested in the job, I would rather remain in my present job. It is important to be passionate about what you do.”

Kauppi spent time in the Department of Foreign Affairs in Africa and the Middle East, a mostly male dominated department.She said that even though she was a woman, when you get to a certain level in your career you’re taken seriously; this was more of a problem earlier in her career. As a young woman new to the foreign affairs industry, she said, “you had to insist on being heard and insist on being taken seriously.”

When it comes to gender equality between the U.S. and Finland, Kauppi says the two countries have different systems of government and different structures within their societies. She said that things like affordable public services and government institutions allow women to participate more in the workforce, leading to higher representation across sectors.

Kauppi has some advice for women looking to take on leadership positions: “It is important to do what you are passionate about, do it well and do it with an open mind. Be active in supporting others, be active in networking, remain true to yourself. Even if you don’t have self-confidence, believe in yourself.”

Ambassador for Finland to the United States
Read More 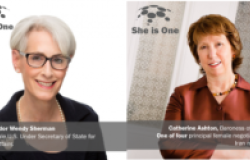 Audio
Gender Equality
She Is One Episode 1: Women at the Table 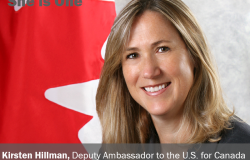 Audio
Gender Equality
She Is One Episode 2: Trading Gender Parity