President Woodrow Wilson's quest for a lasting world peace has inspired the design of the 2013 White House Christmas ornament. As the world prepares to mark the centenary of the First World War, the decoration is a reminder that Wilson’s life was distinguished by his resolve that the Great War would truly be the war to end all wars.

President Woodrow Wilson's quest for a lasting world peace has inspired the design of the 2013 White House Christmas ornament. As the world prepares to mark the centenary of the First 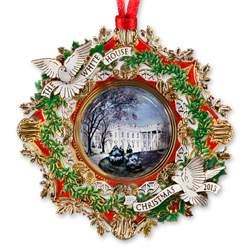 World War, the decoration is a reminder that Wilson’s life was distinguished by his resolve that the Great War would truly be the war to end all wars.

The centerpiece of the decoration is an image of an American Elm tree planted by President Wilson on the North Lawn of the White House on December 18, 1913, just before Christmas. This snowy scene is surrounded by a 24-karat gold-plated frame comprised of elm leaves on the innermost circle, a wreath of olive branches in the middle, and holly leaves bordering Wilson’s monogram on the outermost circle. The words inscribed on the reverse side of the ornament were delivered by President Wilson in his War Message to Congress of April 2, 1917: “Peace must be planted upon the tested foundations of political liberty.”

After the Germans signed the Armistice in November 1918, Wilson went to Versailles Peace Conference in Paris to try to build an enduring peace based on his famous Fourteen Points. As the head of the American peace delegation, President Wilson became the first American head of state to make an official visit to Europe. On Christmas Day in 1918, President Wilson addressed 10,000 troops gathered about him in a vast wheat field near Humes, France. He dined as a guest of General William Pershing at the headquarters of the Twenty-sixth Division.

First Lady Edith Wilson, his second wife, joined her husband on this trip. Together, they visited the wounded at Val de Grâce, the largest French military hospital, Scott Berg notes in his biography of Wilson. "Wilson’s presence alone stirred the patients, many of whom had gathered in a parlor for a Christmas celebration. A slender soldier with one leg sat at a cheap upright piano, while others with bandaged faces gathered around, including one comrade with empty sockets for eyes and a Croix de Guerre on his chest. The pianist banged out the “Marseillaise,” and the blind soldier sang along. Decades later, Edith Wilson would recall the song as 'one of the most dramatic moments of my life,' for the rendition had 'tears in it—tears which had dropped from those sockets where eyes should have been.'"

William B. Bushong is the historian and webmaster of the White House Historical Association, an educational non-profit organization with a mission to promote the study and the public’s enjoyment of White House history. 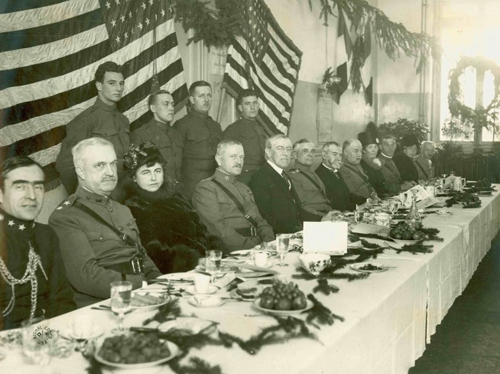