Upon arrival in Washington in the early 1960s, Moynihan wrote the plan to redevelop Pennsylvania Avenue, proposed by President Kennedy in 1962. Simultaneously, Senator Harrison “Pete” Williams of New Jersey had proposed building a memorial to President Woodrow Wilson.

“This interested me, not only because it was a possibility of doing something on Pennsylvania Avenue,” Moynihan had said during a March 2001 interview at the Wilson Center, “but also my doctoral dissertation was principally about Woodrow Wilson, the League of Nations, and the International Labor Organization and how we came to join [it].”

Meanwhile, Dillon Ripley, then secretary of the Smithsonian Institution and Moynihan’s friend and colleague, offered part of the Smithsonian Castle for the Center’s first home. Former U.S. Undersecretary of State for Management Benjamin Read (who died in 1993) became the Wilson Center’s first director, serving from 1969-1973. James Billington, librarian of Congress, served as director from 1973-1987. And Charles Blitzer, former Smithsonian assistant secretary for history and art, became the Center’s third director, serving from 1988-1997.

While a senior scholar, Moynihan watched his career come full circle and said, “Here I am, at the end of 40 years, sitting on Pennsylvania Avenue.” He had undertaken a project to write a book on the 40-year-history of the redevelopment of Pennsylvania Avenue but did not complete the book project before he passed away in March 2003.

In the 1980s, President Ronald Reagan proposed an international trade and cultural center. At the time, Moynihan—in charge of public buildings in the Senate Committee on the Environment and Public Works—devised a lease-to-own plan to help the government pay for the building using the rents from organizations that would lease its offices. The building would become the Ronald Reagan Building and International Trade Center, which now permanently houses the Wilson Center.

In 1987, Moynihan received a letter from Jacqueline Kennedy Onassis, thanking him for his dedication to the Pennsylvania Avenue redevelopment project. The framed letter hung on the wall of his office at the Center, appropriately by the window that looked out across Pennsylvania Avenue. The letter she wrote concludes, “I will be forever grateful, dear Pat, for your message to me all along the way, for the spirit you brought to something that Jack cared about so deeply, and for this happy ending.” 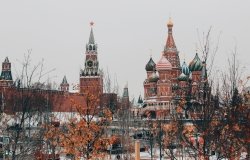 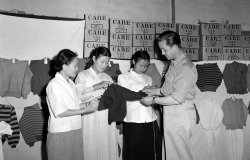 Blog post
Modern Korean History
Woman, Student, and Boy Soldiers in the Korean War
By Jiyul Kim on May 29, 2020

Audio
Coronavirus
To Reopen or Not to Reopen: That is the Border Question