An Update on the Colombian Peace Process with U.S. Special Envoy Bernard Aronson

We spoke with U.S. Special Envoy Bernard Aronson, following the announcement that the Colombian government and the Revolutionary Armed Forces of Colombia (FARC) had reached major breakthroughs on the outstanding issues in the peace process negotiations (transitional justice, disarmament, and a timetable for signing a final agreement). He provides context on how agreement was reached and what comes next.

Bernard Aronson is the U.S. Special Envoy to the Colombian Peace Process. He was appointed to the post by President Obama in response to requests from the Colombian government and the FARC asking that the U.S. take a more direct role in the peace process. Mr. Aronson is the founder and Managing Partner of ACON Investments and also serves on the board of directors for the National Democratic Institute, the board of trustees of the Nature Conservancy, and the board of directors of the Amazon Conservation Team. He is a member of the Council on Foreign Relations and the American Academy of Diplomats. He served as Assistant Secretary of State for Inter-American Affairs under Presidents H.W. Bush and Bill Clinton and was awarded the State Department’s highest honor, the Distinguished Service Medal, for his role in resolving conflicts in El Salvador and Nicaragua. 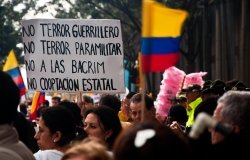 Event
Conflict Resolution and Peacebuilding
A Conversation with The Honorable Bernard Aronson, U.S. Special Envoy to the Colombian Peace Process
On Friday, October 2, 2015 at 8:30 – 10:00 ET