During a visit to Washington, Iraqi leaders sought support from the United States to keep ISIS at bay. Prime Minister Mustafa al Kadhimi and his ministers warned that the group still posed a threat despite the loss of its last territory and its leader in 2019. The delegation arrived on August 19 to meet with President Donald Trump and to continue a strategic dialogue that kicked off in June. The talks focused on a range of issues, but security and counterterrorism were a top priority for the Iraqi officials.

“ISIS sleeper cells are still operating in Iraq,” Kadhimi told journalists on August 20. The group perpetrated 251 attacks in Iraq from January through May 2020, according to U.S. Central Command. The future of the approximately 5,000 U.S. military personnel in Iraq could have profound implications for the fight against ISIS. Trump discussed the U.S. military presence during his meeting with Kadhimi at the White House on August 20. “Now we’re getting out, we’ll be leaving soon,” he told reporters without offering specifics.

Later that day, Kadhimi told journalists that Iraq “definitely” didn’t need U.S. combat troops. “But we do need training and capacity enhancement and security cooperation,” he added. “We can fight ISIS, but we need equipment. We need information,” Foreign Minister Fuad Hussein said during an event hosted by the U.S. Institute of Peace on August 20. “We must take ISIS seriously,” he warned. He said ISIS elements were active around Anbar in the west and Mosul in the north. On August 28, the Pentagon said it would cut the U.S. presence in Iraq from approximately 5,200 to 3,500 troops - a one-third reduction.

Iraqi officials also warned that ISIS was operating near oil rich Kirkuk, disputed territory claimed by the Kurdistan Regional Government (KRG) and the central government that is largely unpatrolled. The following are remarks by Iraqi officials on ISIS and an excerpt from the joint statement on the U.S.-Iraq Strategic Dialogue.

Prime Minister Mustafa al Kadhimi in remarks to journalists on August 20: “The war against ISIS is over, and we announced victory. But sleeper cells for ISIS and other terrorist groups are still there. The kinds of operations need to be reconfigured when it comes to this relationship. Iraqi capacities and capabilities in fighting this terrorist organization are growing.

“I actually thank the U.S. president for the statement that he made yesterday. We definitely don't need [U.S.] combat troops in Iraq. But we do need training and capacity enhancement and security cooperation. There is no doubt that the intelligence cooperation between the international coalition and Iraq in combating terrorist groups had a significant impact in achieving the victory against ISIS. So, we definitely need cooperation in training and capacity building and, more importantly, we seek partnership with the United States in economy, education, and health. And this new phase of security cooperation is coupled with this transition towards a relationship that is focused on the economy and education and health.”

“ISIS sleeper cells are still operating in Iraq. There are certain geographies where they are always trying to reappear. Some of them are coming from Syria. Around three days ago, we arrested over 31 people of individuals who came from across the border, from Syria to Iraq. Other elements of ISIS are active from inside Iraq, especially along the disputed boundaries between the federal government and the KRG. This is why we are very keen on solving these issues with the KRG.”

“The depth of these areas in which we have problems along the disputed boundaries is sometimes up to 50 km [31 miles]. But on the positive side, we find that ISIS now lacks the social safe havens. But now they are resorting to operate in areas, in difficult terrains. Over the past two to three weeks, we had a very strong, sustained campaign against some ISIS cells with the support of the air force of the international coalition in the provinces of Salahaddin and Kirkuk. But the threat is still there. But it is nowhere near the threat that was posed in previous years. In previous years, the threat involved entire cities and towns falling under ISIS.”

Foreign Minister Fuad Hussein at an event hosted by the Atlantic Council on August 21: “There is a vacuum between the line in which the Peshmerga forces are there and the Iraqi forces. ISIS terrorists are using this space. … I'm afraid that if there will not be military or security cooperation between both sides, ISIS will increase its activities. As a result, once again, ISIS would be strong and ISIS in the area around Kirkuk. That's very dangerous. Very dangerous both for Iraq and Kurdistan. But it will be dangerous also for the Iraqi economy because of the oil fields in the area.”

Foreign Minister Fuad Hussein at an event hosted by the U.S. Institute of Peace on August 20: “We have seen when Iraq was under attack and ISIS occupied one-third of the territory of Iraq and established so the so-called Islamic State. ISIS was not a threat only -- for Iraq and for Syria -- and not only the region. ISIS was, in reality, a threat for all of us. For Middle Eastern countries. For European countries. For the international community. Leaving Iraq in a weak position is dangerous. Iraq is also important for the United States because the United States has strategic interests in the region. The United States has many friends in the Gulf countries, and Iraq is on the border with these countries. When Iraq will be threatened, it will also be a threat to many friends of the United States.

“Is the security situation so bad compared with three, four years ago when ISIS was controlling many areas in Iraq? The answer is no. Compared with the past; the security is quite better. But we must be realistic. ISIS organizations, they are still here and there. Besides the ISIS activities, we have quite different threats in this society. Some of them have to do with tribes. Some of them have to do with other groups. All these things create an unstable situation. The priority, in the first place, is security.”

“We can fight ISIS, but we need equipment. We need information. Part of the fight against ISIS is not only about fighters but to have information about ISIS. We need air attacks. We can have support and help from the United States. We must take ISIS seriously. I remember in 2014, when ISIS arrived in Mosul, they were a small group. But in a short time, they became a big, huge force and they controlled Mosul and later on they controlled other cities. We must take this seriously, and we need support and help from the United States. ISIS is still a threat -- not only in Iraq but also in other countries.”

Foreign Minister Fuad Hussein in remarks with his U.S. counterpart on August 19: “The United States of America and Iraq, we are both in the same trench in fighting ISIS, and we are still in the same trench.  And we will work together to defeat the terrorist elements and the terrorist factions and the armed terrorist groups in Iraq, and we reaffirmed that we will work continuously on this field, which is combatting terrorism.”

Joint Statement on the U.S.-Iraq Strategic Dialogue issued on August 19: “In the security and counterterrorism session, the United States and Iraq reaffirmed their commitment to achieving common objectives through bilateral security coordination and continued cooperation between the Iraqi Security Forces and the U.S.-led Global Coalition to Defeat ISIS. The two delegations praised the growing capabilities of the Iraqi Security Forces and their joint success in the fight against ISIS, which has enabled the Global Coalition to transition to a new phase focused on training, equipping, and supporting the Iraqi Security Forces. The Iraqi government expressed its gratitude to the Global Coalition and asserted its willingness to facilitate this transition and confirmed its obligation as host country to provide protection for the Coalition’s personnel and diplomatic facilities in Iraq. Adapting to the requirements of this new phase, the Global Coalition has been able to depart from some Iraqi military bases and reduce combat forces in Iraq. The two sides plan on separate technical talks to manage the timing and transition to the new phase, including any associated redeployments from Iraq. The U.S. and Iraqi delegations recognized the progress of the Iraqi Federal Security Institutions and the Kurdistan Regional Ministry of Peshmerga Affairs in coordinating their efforts to combat ISIS remnants and discussed ways to further this cooperation.” 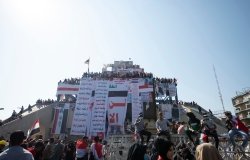