Will the Task Force on Arctic Marine Cooperation Deliver?

By Ambassador David Balton on October 2, 2018

The profound changes that have already come to the Arctic—and the prospect of even more significant changes in the future—have prompted Arctic nations and peoples to reassess the international arrangements they created to help them respond and adapt to such changes. In just a few short years, a number of initiatives to strengthen the governance of the Arctic region have emerged. But as David Balton writes, more needs to be done.

Over the past decade, the Arctic Council (AC) has evolved into the pre-eminent international forum for addressing Arctic issues. Among other things, it now boasts a permanent Secretariat and an Indigenous Peoples Secretariat. It has also helped establish a number of other entities, including the Arctic Economic Council, the Arctic Coast Guard Forum and the Arctic Offshore Regulators’ Forum.

Highlighting that the Arctic Ocean is experiencing unprecedented change, the task force concluded that Arctic nations would likely need “additional new institutional capacity” to tackle the challenges that would result.

But another notable and potentially consequential effort to strengthen the governance of the Arctic—the Task Force on Arctic Marine Cooperation—appears to have become sidetracked.

In 2015, the Arctic Council created the task force with a mandate “to assess future needs for a regional seas program or other mechanism” for the Arctic. The task force worked actively for two years and delivered a well-crafted report with recommendations in 2017. Highlighting that the Arctic Ocean is experiencing unprecedented change, the task force concluded that Arctic nations would likely need “additional new institutional capacity” to tackle the challenges that would result.

In May 2017, the Arctic Council Ministers “recognize[d] the increasing need for regional cooperation to promote the conservation and sustainable use of the Arctic marine environment” and gave the task force a new mandate: to present “terms of reference for a possible new subsidiary body, and recommendations for complementary enhancements to existing Arctic Council mechanisms, for consideration by Ministers in 2019.”

The task force has met twice during the Finnish chairmanship of the AC. At this point, it appears unlikely to fulfill the key part of its current mandate—namely, to present the requested terms of reference. Senior Arctic Officials (SAO’s) have instead suggested that consideration of any new subsidiary body should await the completion of the AC’s first-ever strategic plan, currently under development.

Looking ahead, those involved will need to consider further steps in improving Arctic governance to meet the region’s needs, including conserving Arctic biodiversity. The Arctic Council has room to grow in this regard without losing its flexibility or inclusiveness. Its members should provide financial and other resources to the AC in a more transparent and predictable manner, a necessary predicate to any call for an increase in such resources. The AC should also streamline and consolidate its dispersed secretariat structures.

A new initiative—such as a regional seas program—should be launched to create such a mechanism outside the Arctic Council framework.

With respect to the five new binding agreements, the parties to each of them must ensure they are implemented effectively—a process that has already begun in the case of the Search and Rescue and the Marine Oil Pollution agreements. Another challenge will be to figure out how these instruments—along with the Arctic Council and the other international bodies that address Arctic issues—should interact with one another to form a well-integrated Arctic governance system.

A final thought: If the Task Force on Arctic Marine Cooperation does not present terms of reference for a new Arctic Council subsidiary body that would help Arctic states and peoples to cooperate on Arctic Ocean issues, a new initiative—such as a regional seas program—should be launched to create such a mechanism outside the Arctic Council framework. This mechanism could draw inspiration from similar mechanisms elsewhere, but should be tailored to meet the specific needs of the Arctic region and developed in a transparent manner with the involvement of Arctic stakeholders.

This article originally appeared in The Circle: Arctic biodiversity in the spotlight. 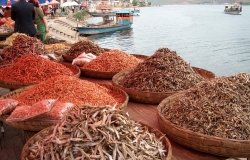