As the Wilson Center celebrates its 50th anniversary, Wilson Center NOW looks back at the Center’s history with Robert S. Litwak, Senior Vice President and Director of International Security Studies. From the vantage point of Litwak's more than three-decade career at the Center, we discuss the organization’s impact and relevance past, present, and future.  We also learn about what sets the Wilson Center apart from other DC institutions and how it has evolved since its founding in October of 1968. 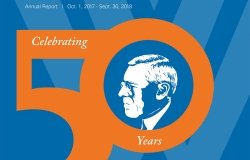 Publication
Wilson@50
A Year of Insight and Impact: Annual Report, 2017-18