“The Wilson Center’s Canada Institute is the only program of its kind in Washington and a major reason why we are ranked number one in the world for regional studies,” said Jane Harman, Director, President and CEO of the Wilson Center. “We are confident that Chris Sands will further enhance our excellence. His thought leadership will be invaluable as North America faces new policy challenges and opportunities, including the passage of USMCA.”

Dr. Sands’ career in Washington think tanks dates back to 1993 when he joined the Center for Strategic and International Studies (CSIS) as a resident specialist on Canadian affairs as the U.S. debate over the North American Free Trade Agreement (NAFTA) began and later staffed the Smart Border North Congressional Working Group to foster dialogue with Canada on border security after the September 11, 2001 terrorist attacks on the United States. He joined the Hudson Institute as a senior fellow in 2007 and led the Hudson Initiative on North American Competitiveness until 2016.

Professor Sands is a member of the faculty of the Paul H. Nitze School of Advanced International Studies (SAIS) at Johns Hopkins University. From 2012 until 2017 he was the G. Robert Ross Distinguished Visiting Professor in the College of Business and Economics at Western Washington University, and from 2005 to 2012 he taught in the School of Public Affairs and the School of International Service at American University.

Dr. Sands serves as a member of the board of directors for the Institute for Research on Public Policy (IRPP) in Montreal, on the executive committee of the Canada – United States Law Institute (CUSLI) at Case Western Reserve University and Western University of Ontario, and on the research advisory board for the Macdonald Laurier Institute (MLI) in Ottawa.

“For more than a decade the Canada Institute at the Wilson Center has been the top think tank on Canada and US-Canadian relations in the United States,” Dr. Sands said. “It is an honor and a privilege to lead their outstanding team and work with the Global Fellows and researchers who have earned Wilson a reputation for excellence and insight on Canada.”

Dr. Sands lives in Silver Spring with his wife Victoria Corke and their cairn terrier Pip.

The Canada InstituteThe Canada Institute was founded in 2001 to increase awareness and knowledge about Canada and Canada-U.S. relations among U.S. policymakers and opinion leaders. The Institute currently stands as the only nonpartisan public policy forum in Washington, D.C., the United States—and even Canada—dedicated exclusively to exploring emerging policy issues in one of the most successful and unique bilateral relationships in the world. 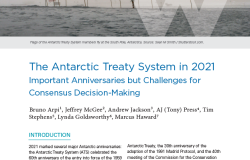