The latest edition of Brazil's Violence Map shows that the country has, once again, broken its record both in absolute numbers of homicides (65,602) and murder rate per 100,000 people (31.6). The study is conducted annually by the Institute for Applied Economic Research (Ipea) and the Brazilian Forum for Public Safety (FBSP).

This number, however, is not equally distributed. While the overall murder rate jumped 24 percent in 10 years, the rise in North and Northeastern states (the country's poorest) was a staggering 68 percent.

Race is also a determining factor. In 2017, the number of blacks killed was almost three times higher than among non-blacks (a group encompassing white, Asian, and indigenous people). 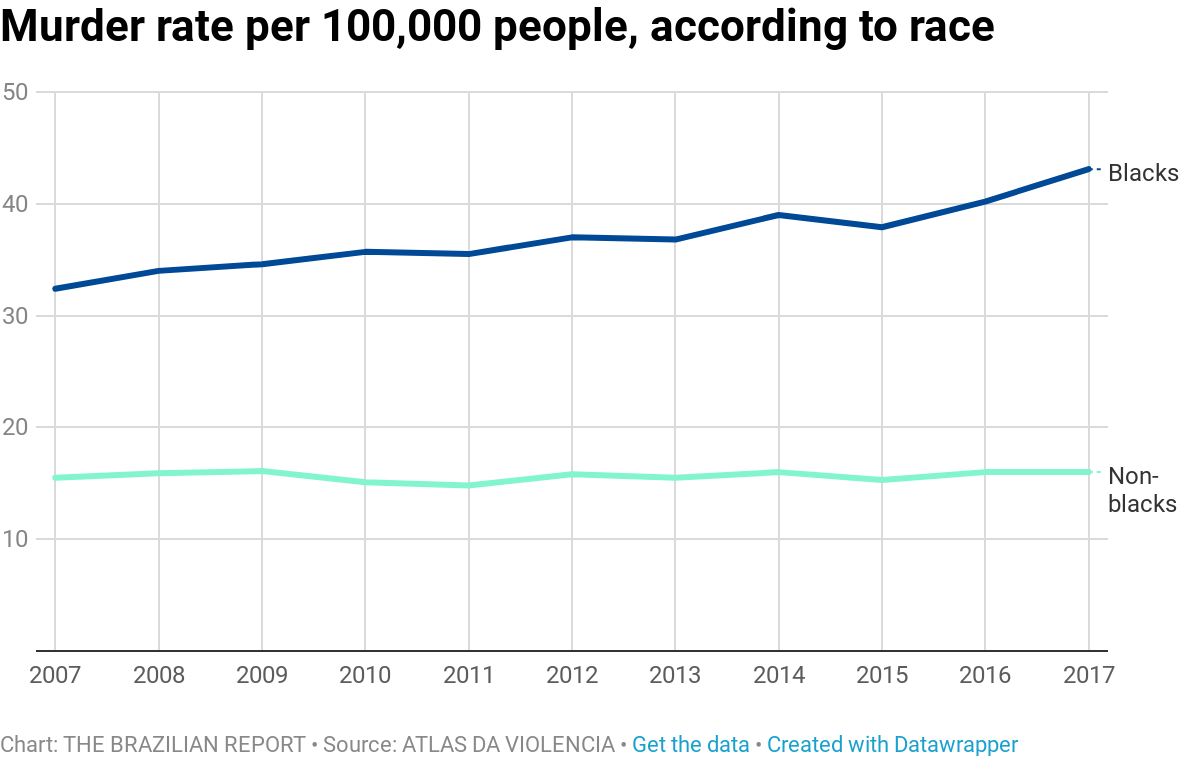 In no state is the discrepancy wider than in Alagoas. A black citizen living there is 18 times more likely to be murdered than a non-black person. The black murder rate reaches 67.9 per 100,000—one of the highest in the country. Meanwhile, it is as low as 3.7 for non-blacks—being the safest state for this demographic.

Only in Paraná is the rate higher among non-blacks, but with a major caveat: Paraná's population is two-thirds white. In other states, such as Amazonas, the murder rate among non-blacks rose more than among blacks—203 percent against 88.9 percent, respectively.

"Once again, we have seen the continuation of a process of profound racial inequality in Brazil—although we recognize that this process manifests itself in different ways, making for very diverse state scenarios," reads the report. 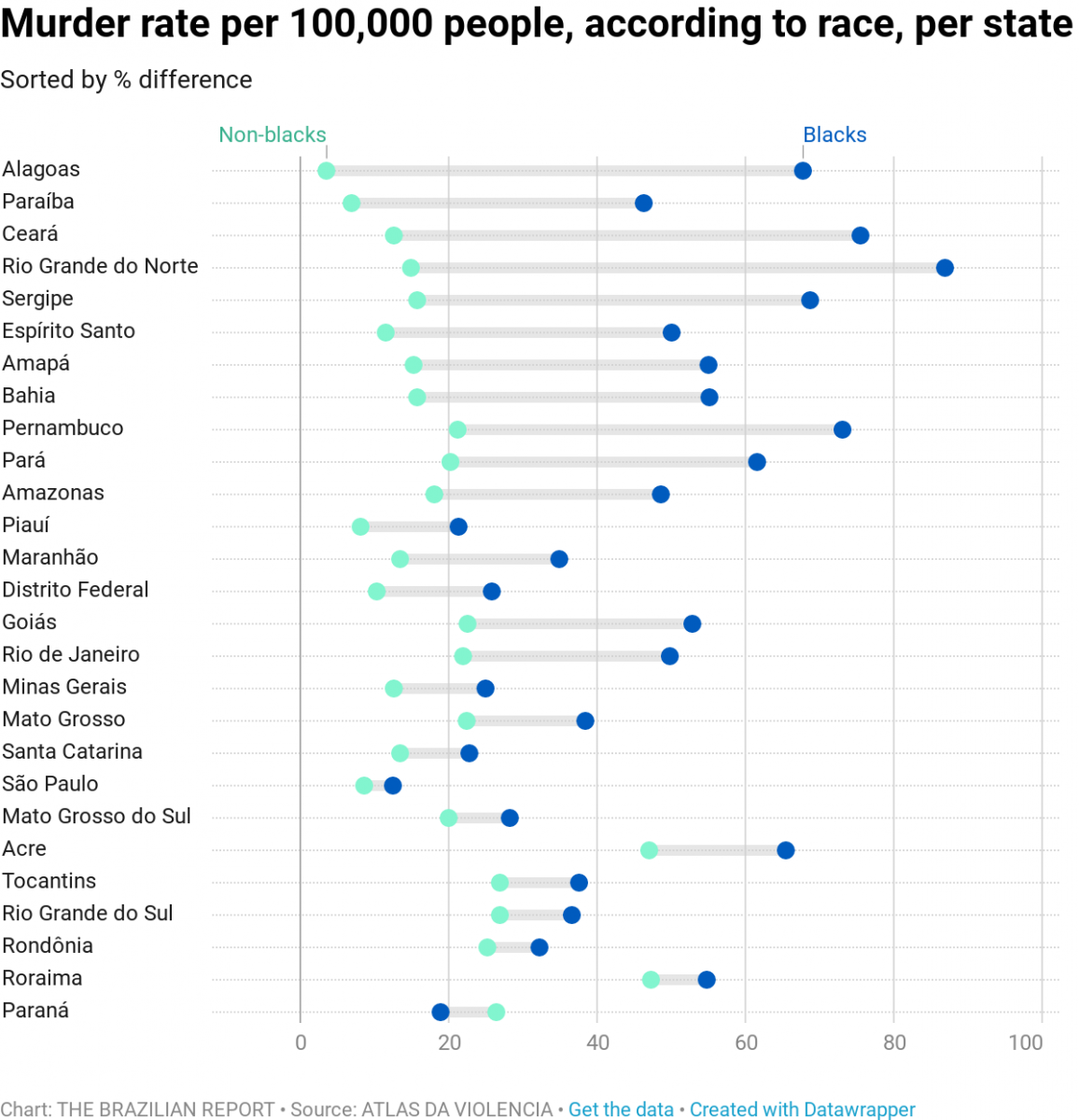 Although the number of female homicides pales next to males' (4,936 against 60,666), they show an alarming trend. Over the past decade, there was a 30.7-percent rise in the number of women murdered. Never before have so many women been killed in Brazil. And, once again, race plays a factor. Black women are almost twice as likely to be killed than non-black women. 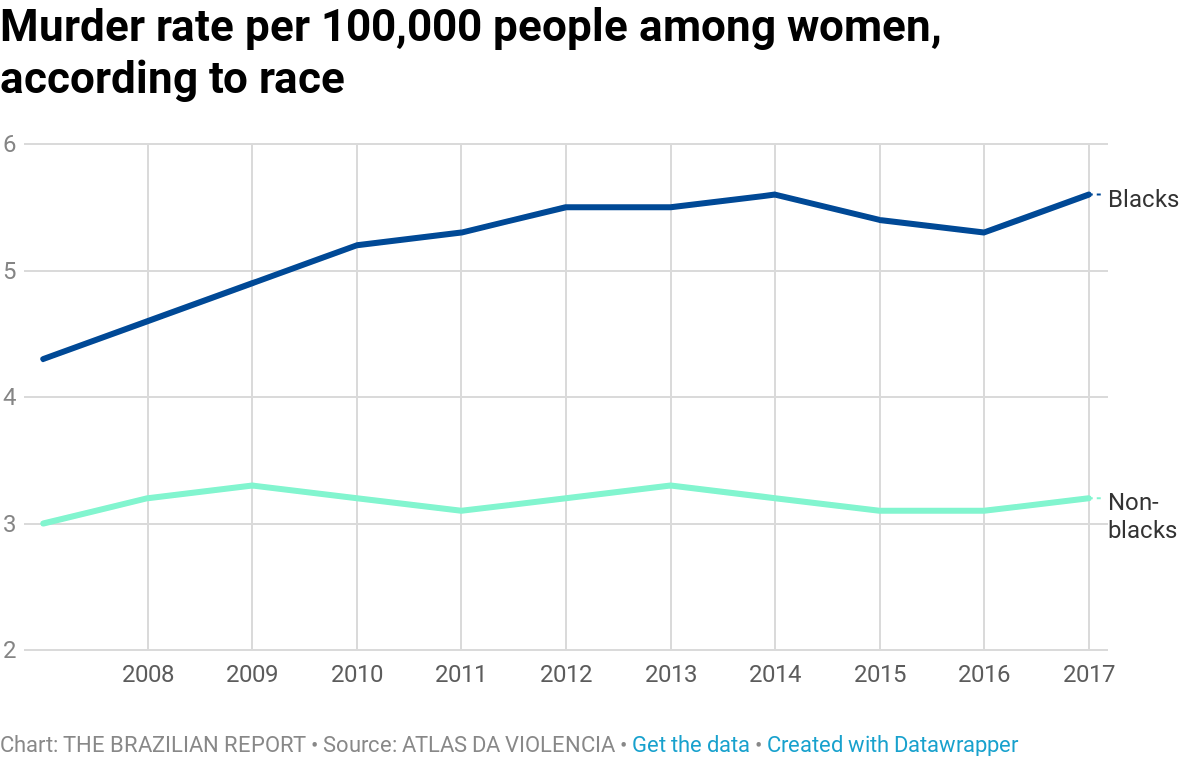 However, the report states that the overall perception that femicide crimes have skyrocketed over the past years might not necessarily reflect an increase in such crimes. It could instead be connected to a higher rate of reported crimes. Femicide was only defined as a crime in Brazil's penal code four years ago. Moreover, not every case of women being murdered is actually femicide—a crime in which the victim's gender is a central point, such as in domestic violence cases.

Violence Against the LGBTQ Community

Assessing violence against LGBTQ people is the most challenging part of the Violence Map. Neither the census nor any survey conducted by the Brazilian Institute of Geography and Statistics ask people about their sexual orientation, and police data also does not sort victims based on that criteria.

The map uses data from two sources: Disque 100, a complaint hotline operated by the Ministry of Human Rights, and the Brazilian public healthcare system (SUS), which reports all cases of violence as well as the sexual orientation of people admitted to the hospital. Between 2015 and 2016, there was a 10-percent bump in violence against homosexual people and 35 percent against bisexual people.

The study asks whether that growth could be connected to a lower rate of crimes going unreported. One thing, however, clashes with that explanation. The number of total violence reports has gone down, instead of up—while reported murders rose during the same span. 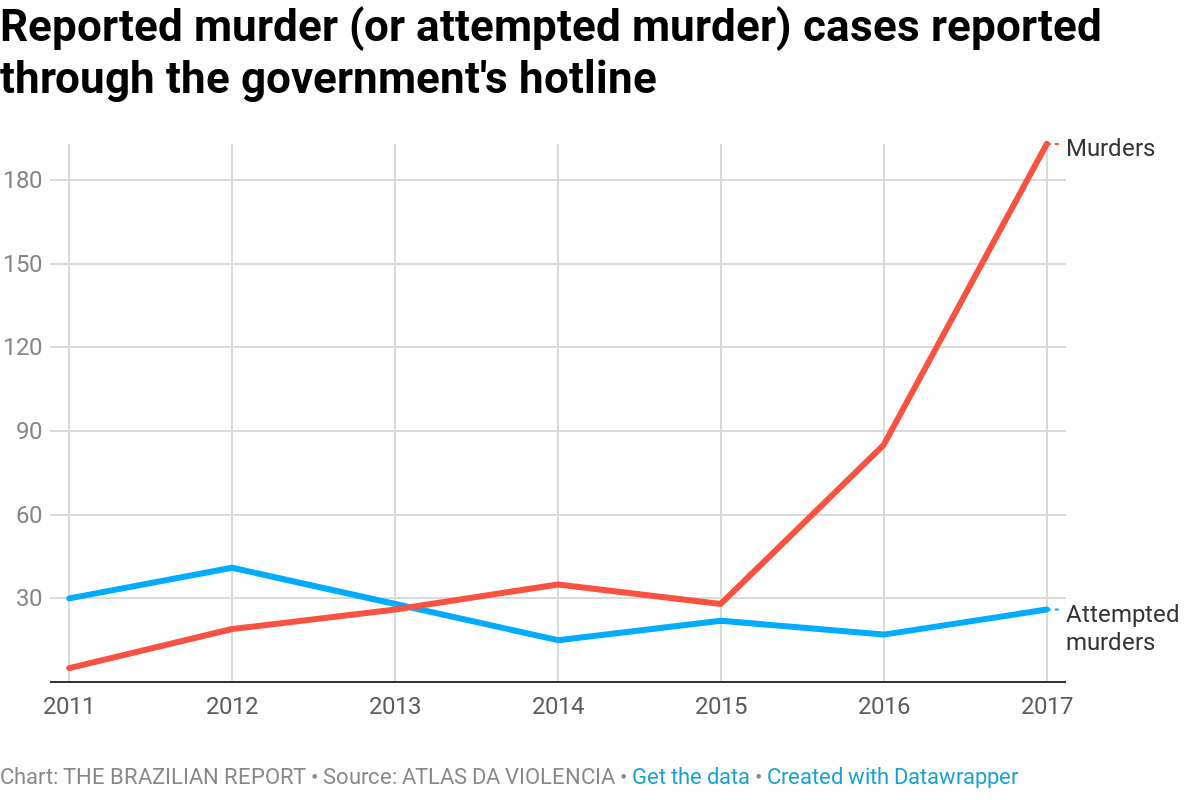 Effects of Violence on the Economy

According to the study, violence costs Brazil around 6 percent of its GDP. Citizens feel they need to spend more money on private security, while the state ends up injecting more resources into law enforcement and healthcare. The estimate also counts intangible costs, such as the money Brazil loses by scaring off international tourists.

The study shows that there is no easy solution to Brazil's violence problem—but researchers suggest that making it easier to have a gun, as President Jair Bolsonaro's agenda intends, could push the number of violent deaths higher.