Explore More
Close
Blog post
Elections
The 2022 Philippine Election: Trouble for Democracy and Foreign Relations Ahead?
By Lucas Myers on May 10, 2022
Share on FacebookShare on TwitterShare via Email
SharePrint
Part of the U.S.-North Korea Summit 2.0
Blog post

The first U.S.-North Korea summit under the Trump administration left some concerned about the possible withdrawal of American troops from South Korea. Though North Korea promised to denuclearize, progress was minimal.  The outcome of the second summit meeting between Donald Trump and Kim Jong-un will pose deep implications for the already influenced geopolitics of the Korean Peninsula and the greater region.

On January 30th, the Asia Program together with the Korea Center, the Kissinger Institute, and the Kennan Institute hosted three sessions discussing the geopolitical consequences of the U.S. engagement with North Korea The second panel explored the implications of a potential diplomatic failure. The speakers included Nobumasa Akiyama, the Dean of the Graduate School of International and Public Policy and professor at the Graduate School of Law at Hitotsubashi University, Patrick Cronin, chair of the Asia-Pacific Security Program at the Hudson Institute, and Abraham Denmark, director of the Asia Program at the Wilson Center.

“There is a wider shared view that denuclearization probably means the complete elimination of the nuclear weapon capabilities,” Akiyama pointed out. “If we set this as a goal for the forthcoming negotiations, then it cannot be achieved in one phase.” Japan, however, “has been insisting on the quick and one phase completion of the denuclearization process… given that the window of opportunity for negotiation with North Korea is not going to open forever,” Akiyama suggested that it’s time to accept reality and design a “phased approach for denuclearization.”

As for assessing the forthcoming negotiation, “there are three possible criteria,” Akiyama said.  “One, whether the deal would ensure the nuclear threat reduction in terms of nuclear weapon capabilities with North Korea, or… [at least] clear prospect for the progress toward denuclearization. Second, the deal must be positive to the regional security, or at least the deal doesn’t contain negative implications. Third, the deal must be politically acceptable and sustainable both in terms of domestic politics and in terms of alliance politics.”

Recognizing U.S. focus on North Korea’s ICBM capabilities, Akiyama noted that ICBM abandonment could create “the threat of perception gap between the United States and Japan.” Elimination of North Korea’s ICBM capabilities marks reduced threat to the United States’ security. Though Japan could positively interpret such as the U.S.’s ability to “commit to the alliance [with Japan and South Korea]…without fearing the retaliation by North Korea,” it could also fear that “the United States may reduce the interest in further progress in the denuclearization process.”

If ICBM abandonment does occur, North Korea requires rewards. Akiyama raised the need for a “fine-tuned balance between the threat reduction and the reward” provided to North Korea, emphasizing that “such a reward should not be a measure to undermine the functions of the U.S.-Japan alliance in terms of the extended deterrence provided to Japan and other allies in the region.” Moving forward, “Japan would like to see the clear message from the United States to reaffirm the importance of the alliance vis-à-vis the allies and also vis-à-vis other players in the region that the allies keep on playing a key role in the regional security.”

Echoing Akiyama’s sentiment, Cronin stated that the “next summit will not be decisive” and will leave countries asking the same questions. To obtain “sufficient success from a U.S. policy perspective,” pre-negotiation should be held to specify U.S. demands for the Kim regime “that would point toward the direction of denuclearization.” Cronin argued that the United States currently lacks strategic thought with allies and even competitors. Fear and indifference dominate discussions on North Korea diplomacy. Fear about losing all progress with North Korea diplomacy, and retrenchment of geopolitical influence in the rise of China, is “behind a lot of the criticism about policy and thinking.” The indifference, on the other hand, “is driven by the fact that [the U.S. and its allies have] been locked in a cold war with North Korea…[but] have been unable to change it.” Such indifference translates to “complacence about nuclear deterrence holding up” thus ignorance to danger and the possibility of “major geopolitical change.” 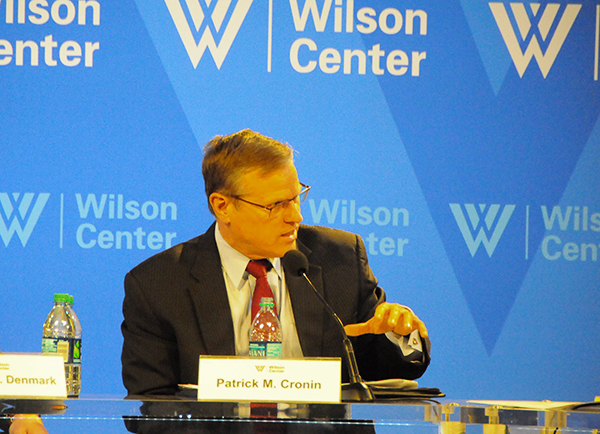 Cronin said there were three possible outcomes of the approaching summit. The first would be a “path started toward a genuine peace agreement…but even genuine peace could be a failure geopolitically for the United States… [and] could be antithetical to Japan’s national security interest.” The second could be a “phony peace,” which Cronin viewed as unsustainable. He stated, “if it’s not effective diplomacy, that is, if we’re not marching in the direction of some serious meaning steps to denuclearization, ultimately we just have to cut the wire on [summit diplomacy].” The final possibility, according to Cronin, is failed peace, which could result in “a situation of crisis…that’s not quite fire and fury but is not as stable as it had been in deterrence and containment for years before.” Such possibility requires vigilance, strategy, resources, and, above all, allies.

How the diplomatic approach to North Korea progresses depends on what is defined as good enough, said Denmark, “for China, success would mean no war and that things are in diplomatic process.” While Japan, as Akiyama said, anticipates threat reduction, conflict avoidance, progress toward denuclearization and maintenance of a “robust American presence and commitment.” The Trump administration, however, “has voiced different definitions of what success would entail.”

An ongoing challenge, according to Denmark, is the fear of allies in Asia for decoupling. “Allies may be concerned that because the North Koreans have a nuclear capability, ability to strike the United States with nuclear weapons, they may be able to keep Americans out.” Denmark pointed to the role of ICBM in how allies think about American commitment. The fear, rather than directed at North Korea’s ICBM capabilities, “speaks to the broader challenge that [the United States will] be facing, that [it] faces now.” Though the need for reassurance is a consistent part of any alliance relationship, “if North Korea is able to retain [ICBM] capability, demand for reassurance is going to intensify to the point that the United States is not going to be able to just operate as it had before.” Reassurance of allies then needs to become broader and more direct.

Denmark noted that “so much as the Trump administration has been able to describe a strategy for Asia, it has been very much focused on competition with China…up to the point where in the national defense strategy it was pointed out that great power competition was now a higher priority than countering international terrorism.” He reiterated the other panelists’ call for broader strategy and voiced that “if the United States fails to have an integrated strategy that deals with both North Korea [and] China and…enhances the roles of [U.S.] allies and partners in the region…the United States is going to continue to struggle to deal with [the diplomatic] challenge [in the Korean Peninsula].”

This panel discussion was part of a three part event, "Geopolitical Implications of a New Era on the Korean Peninsula."  To view videos of all three panels as well as read selected quotes from the day, visit the event webpage.