Dr. Nancy Bernkopf Tucker was a noted diplomatic historian, accomplished scholar, inspiring teacher, highly-regarded official and policy analyst, valued mentor, cherished friend, and loving and much loved wife of historian Warren I. Cohen. At the time of her death, she held a joint appointment in the department of history and the Edmund A. Walsh School of Foreign Service at Georgetown University.

Currently, the concern over deteriorating U.S.-China relations and lack of enforcement of international law standards leads many to wonder what the future might hold for the international community. Though many see China as the main violator of these rules and regulations, the question arises of whether the United States and other actors truly practice what they preach when it comes to international law.

On April 11th 2019, the Asia Program hosted Jerome A. Cohen, an NYU law professor specializing in East Asian affairs and faculty director of its U.S.–Asia Law Institute. He is also adjunct senior fellow for Asia at the Council on Foreign Relations and previously taught Chinese law at the University of California (Berkeley) and Chinese, Japanese, and international law at Harvard Law School. Through an analysis of  his classmate CIA Agent Jack Downey’s imprisonment in China, Cohen addressed the implications this case has for U.S.-China relations and the Chinese governments’s perception of how the United States “practices and preaches” international law.

Cohen began by illustrating the international law field more broadly. “International law is interactive. You can’t expect other countries to behave themselves according to your perception of the rules, if your own government fails to do the same. Each country’s conduct has an inevitable impact on the others.” From this foundation, he began his account of Jack Downey’s decades-long journey from Yale undergraduate (’51) to a captive CIA agent. Less than 18 months after graduation, “[Downey] was shot down over China, in a plane organized by the agency to pick-up anti-communist Chinese who had been previously dropped in Northeast China.” Announced missing and presumed dead, Jack Downey remained secretly imprisoned until November 1954, when the Chinese government announced he and another agent, Richard Fecteau, had been brought before a tribunal and punished for espionage and potential sabotage. “The U.S. had to do something about this, we had to explain it. China was producing all kinds of evidence through the new China news agency…and they were set to have the two defendants to have confessed.” In an attempt to cover-up the CIA’s actions to subvert the Chinese government, “the U.S. government put out a totally preposterous story, that they were civilian employees of the Army, that they were on a flight between Seoul and Tokyo and somehow they were shot down.”

In the name of ‘hostage diplomacy,’ the United States government continually denied concessions and admittance of wrongdoing to the PRC in return for the release of Downey and Fecteau.

Addressing the hypocrisy of the U.S. story, Cohen pointed out that “The United States not only refused to establish diplomatic relations after recognizing the communist regime, but we did everything possible secretly to undermine it, blatant violation of public international law. Yet, the pretense was these were innocent American sons of American mothers who grew up eating apple pie and ice cream, and these ‘godless communists’ had taken unfair advantage and held them unreasonably without any foundation as hostages. This, we claimed, was hostage diplomacy.” In the name of ‘hostage diplomacy,’ the United States government continually denied concessions and admittance of wrongdoing to the PRC in return for the release of Downey and Fecteau. Finally, in 1973, the Nixon Administration briefly addressed the CIA’s involvement in the case, and within six weeks Jack Downey was released. Cohen acknowledged the skillfulness of this action, “To the credit of Nixon and Kissinger, they handled this in a smooth way. No crawling to Beijing, they finally told the truth after almost 20 years of lying about the case, and Jack came out.”

What does this story mean today in regards to U.S.-China relations and international law? Cohen highlighted that “The People’s Republic was just entering the world community in 1949. They were just beginning to use public international law. And this was the kind of exposure that they were given by the United States, then not only principal power in the world but the leading exponent of public international law. That kind of exposure, that kind of introduction couldn’t be lost on the PRC… they [saw] how the rules of the game were practiced.” 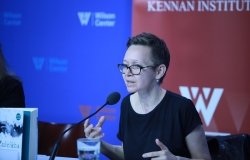