By The Brazilian Report on September 3, 2019

Brazil is known worldwide as a major agricultural power. But despite being one of the top food producers in the world, the country is still grappling with challenges, such as finding sustainable ways to farm and sharing the wealth of its fields with the overall population. Recently, several agriculture initiatives have gained traction in Brazilian cities, offering new alternatives for addressing food security and sustainability concerns, while contributing to better living conditions for citizens.

Some of these examples are from São Paulo, the megacity of 12 million residents, dotted with skyscrapers and little obvious green space. At first glance, it is the last place in Brazil you would expect agriculture to be present. However, 28 percent of the city’s total area is actually considered rural, due to the expansive and sparse districts of Parelheiros and Marsilac to the south of the city. 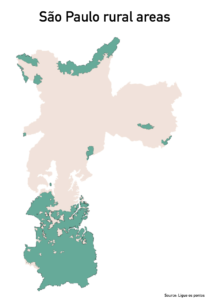 Situated about 50 km from the city center, Paralheiros and Marsilac are home to one of the largest urban forests in the world and several rural properties. Maintaining the vegetation in the area is important not only for food production, but also for preserving the nearby reservoirs that provide water to 5.6 million people in São Paulo, and for regulating temperatures. São Paulo’s local government realized that keeping the farmers on their land in these areas was the best way to avoid real estate speculation and a disorganized urbanization process.

Within this context, the mayor's office developed the “Ligue os Pontos” (Connect the Dots) project, which won the 2016 Mayors Challenge award granted by Bloomberg Philanthropies. The initiative teaches modern planting techniques to producers living in Parelheiros, so they can farm in a more sustainable, organic way—as well as increase their production.

The potential is huge. According to data provided by the city government, about 420 km² could be farmed in São Paulo’s rural areas. Their products moreover have a large potential market, as 70 percent of the food consumed in Brazil comes from small, family properties.

Founded in 2004 by business manager Hans Dieter Temp, the NGO Cidades Sem Fome (CSF, Cities without Hunger) present other initiatives focused on using agriculture to transform Brazilian society. Raised in the countryside of Rio Grande do Sul, a state with deep agricultural roots, Dieter Temp went to Germany to study. There, he was impressed by the country’s tradition of using public spaces for farming or gardening, initiatives carried out by the population itself. Years later, after moving to São Paulo, he decided to use vacant spaces in São Mateus, one of the poorest neighborhoods in the eastern portion of the city, to produce food and income for local residents.

Starting in areas such as power distribution stations, CSF already manages 27 urban vegetable gardens, as well as 38 vegetable gardens in public schools. A team of 12 people, including technicians and volunteers, teaches community members, who farm the land and enjoy the results by consuming the organically-produced vegetables and selling the excess for extra income.

Mr. Temp, who now oversees CSF full-time, explains that the idea is to empower people so they can eat better or eventually manage their finances without help.

“We look for resources to promote and hatch new projects. The idea is that they can become financially stable with the project. We had the case of a man who used to work in stores, was fired by the age of 50 and then became depressed. He came to us saying he did not have the money to pay his bus fare. But he was an amazing salesman, so all we had to do was teach him how to farm. Now he earns more than BRL 2,000 selling vegetables,” Mr. Temp told The Brazilian Report.

Currently, 150 urban workers live exclusively on the income they obtain from selling vegetables. According to CSF, more than 800 people have food gardens, while more than 1,000 people have enrolled in the technical course provided by CSF.

CSF worked so well in São Paulo that it has now spread to the countryside. The NGO has been working with farmers in the city of Agudo, Rio Grande do Sul. There, the challenge is to teach farmers how to make the most of their properties, instead of relying on a single commodity.

“They produce only tobacco or rice, so they have a single income for the entire year. Then they borrow money with high interest. When the next harvest comes, they will get their produce and sell it to pay the bank. It becomes a snowball effect. The idea is that they can continue with their monoculture, but also have other businesses, such as breeding pigs, fish, [and] chicken and planting greens.”

As part of their effort to diversify production, they managed to find an off-season source of income for farmers. Rio Grande do Sul is a large consumer of cassava, but the root cannot remain in the fields during winter, so they must harvest everything before May. Therefore, CSF has helped local farmers build cold storage chambers. The entire cassava crop is harvested before May and stored during winter, to be sold from September onward. “This is generating huge impacts on income. Because after the winter there’s no more supply. This year alone we stored 106,000 kilos of cassava,” says Mr. Temp, adding that the cassava is then sold to local restaurants and hotels.