Kate Brown: Uncovering the Realities of the Chernobyl Accident 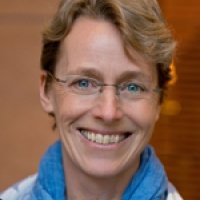 A former Title VIII-Supported Research Scholar with the Kennan Institute, Kate Brown's latest book "Manual for Survival: A Chernobyl Guide to the Future" is up for a 2019 NBCC Award.

Kate Brown is a Professor of History at University of Maryland, Baltimore County. From December 2006 to January 2008, Brown was a Title VIII-Supported Research Scholar with the Kennan Institute. Brown has written multiple books that have received many awards for excellence, including the 2015 John H. Dunning Prize from the American Historical Association for the best book in American history in the last two years for book Plutopia: Nuclear Families in Atomic Cities and the Great Soviet and American Plutonium Disasters. Plutopia also won the 2014 George Perkins Marsh Prize from the American Society for Environmental History (ASEH), the 2014 Ellis W. Hawley Prize from the Organization of American Historians (OAH), and the 2014 Heldt Prize from the Association for Women in Slavic Studies, among others. She also authored A Biography of No Place: From Ethnic Borderland to Soviet Heartland, winner of American Historical Association’s George Louis Beer Prize for the Best Book in International European History, and Dispatches from Dystopia: Histories of Places Not Yet Forgotten. Her latest book ­­ Manual for Survival: A Chernobyl Guide to the Future is up for the 2019 NBCC Awards for the nonfiction category.

Q: Your book, Manual for Survival: A Chernobyl Guide to the Future, was recently announced as a finalist for the nonfiction category of the 2019 NBCC Awards. Can you tell the Wilson Center audience more about this book and what you hope readers take away from it?

A: It turns out that we don't know much about the medical or environmental consequences of the Chernobyl accident. UN sources say 33 to 54 people died and a few thousand will die in the future from Chernobyl radiation. Greenpeace projects that at least 90,000 fatalities will result. That is a huge range of uncertainty. Manual for Survival: A Chernobyl Guide to the Future seeks to get to the bottom of these questions about the long aftermath of the Chernobyl accident for people and environments most affected by the accident.  Working through 25 archives, I found that doctors and scientists on the ground were alarmed by increasing frequencies of disease and a great deal of evidence that Chernobyl contaminants had saturated the food chain. By 1990, they declared they were in the midst of a public health catastrophe and needed international help.  UN agencies came in at that time to carry out an independent assessment of the accident's environmental and medical consequences. UN experts determined after a study that Chernobyl had caused no major health problems and would likely cause none in the future except for a small number of pediatric thyroid cancers. I found that international experts dismissed most of the research of Soviet scientists working amidst the disaster and even went to the extent of hiding evidence of a major pediatric spike in thyroid cancers.

Q: You have done a lot of investigative research regarding the cover-ups on all sides of the major effects of nuclear energy. What were the reasons you found that made it so important to bury the truth about the impact of radioactivity?

A: I found that in the 1990s, just as the story of widespread health problems in the Chernobyl-contaminated lands broke, archives recording the production and testing of nuclear weapons during the Cold War were declassified. As people in the US, France, Great Britain and Russia learned the extent to which they had been exposed to billions of curies of radioactivity from nuclear weapons production and testing, they went to court.  Many of the arguments about low dose exposure to radioactive contaminants and health problems centered around Chernobyl. If lawyers defending nuclear production agencies could point to Chernobyl and say, 'look, this was mankind's worst nuclear disaster and only 54 people died,' then those lawsuits could go away. And that is what happened. Chernobyl was instrumentalized to defend national nuclear weapons agencies from lawsuits at the end of the Cold War.

Q: Your work has brought to light much about nuclear history in Cold War- and post-Cold War-era Europe. From your perspective, what makes this kind of historical research important to society today?

A: As societies around the world face the consequences of climate change, proponents of nuclear energy argue that nuclear power is a safe and feasible option to reduce dependence on fossil fuels. Before we take that big leap of investment in an extremely expensive and slow-to-develop technology, we should know more about accidents of the past.

A: I am researching a project now on what I call "Plant People," that is people who have over the centuries developed intense and fruitful relations and forms of communication with the plant world.