Pakistan’s foreign minister, Bilawal Bhutto Zardari, visited the Wilson Center on September 27th to offer his perspective on Pakistan’s foreign policy priorities. Mr Bhutto Zardari started his speech by emphasizing the impact of Pakistan’s recent floods as a force that fundamentally shifted the nation’s on-ground realities, and by extension, its foreign policy priorities. While Pakistan’s immediate priorities are focused on receiving funds for rescue, relief, and reconstruction of the damaged areas, the floods have compelled it to discover that there is an “urgency of now” to build climate-resilient infrastructure. This will mean reconstructing in a greener manner that can reasonably survive any similar catastrophes in the future. According to Mr Bhutto Zardari, how Pakistan will choose to rehabilitate will become the test case for climate resilient infrastructure worldwide.

Referring to the impact of the floods as a compounding tragedy, he recognized that efforts to recover are only going to become more challenging with time.

Aside from this, climate change has also exacerbated food insecurity, poverty, and homelessness in Pakistan. The incomes of small farmers and agricultural areas have unsurprisingly been deeply impacted. The World Health Organization has commented that the floods are a health catastrophe and that current supplies for common flu and anti-malaria medications are unable to keep up with the medical needs of flood victims. Referring to the impact of the floods as a compounding tragedy, he recognized that efforts to recover are only going to become more challenging with time.

Mr. Bhutto Zardari stressed that Pakistan is paying for a problem that it did not create, therefore, Pakistan is not asking for charity, but justice. This is because Pakistan, like all the other countries on the list of the top 10 most climate-stressed countries, contributes very little—in Pakistan’s case only 0.8 percent—of the global carbon footprint. Additionally, he expressed frustration over the lack of any international financial structure that has the capacity to address climate calamities of this scale.

We will all fight amongst ourselves if there's a planet left to fight over. Until then there we need an awakening—this is the time for unity and multilateralism, not war.

Dubbing the Great Powers of the world as the “Great Polluters,” he urged them to go beyond talk, and take action to ensure we are better prepared the next time this happens in another country. Additionally, he specifically highlighted the greater responsibility that the United States and China bear toward the rest of the world in the fight against climate change. He said, “Let me be absolutely clear. We will not overcome climate change… We will not save our planet if China and the US do not work together on Climate. Everything else can wait. Every other conflict. Every other dispute. We will all fight amongst ourselves if there's a planet left to fight over. Up until then there needs to be an awakening. This is the time for unity. This is the time for multilateralism. This is not the time for war.”

On several occasions, Mr. Bhutto Zardari implied that it was important to put pressure on the Great Polluters to protect the victims of their industrialization. Moreover, according to Mr Bhutto Zardari, it is hypocritical of the Great Polluters to lecture other countries about green energy while they continue to engage in conflict. On a domestic level, he recognized that Pakistan faces a very polarized domestic political environment, and that it is important for the nation to rise above this, acknowledge the gravity of climate change, and work together as a nation to address these issues.

Despite all his criticism of the international community, he frequently reiterated that diplomacy and dialogue are key to peace vis-a-vis the climate emergency: Since climate change is a global problem, it requires a global solution. 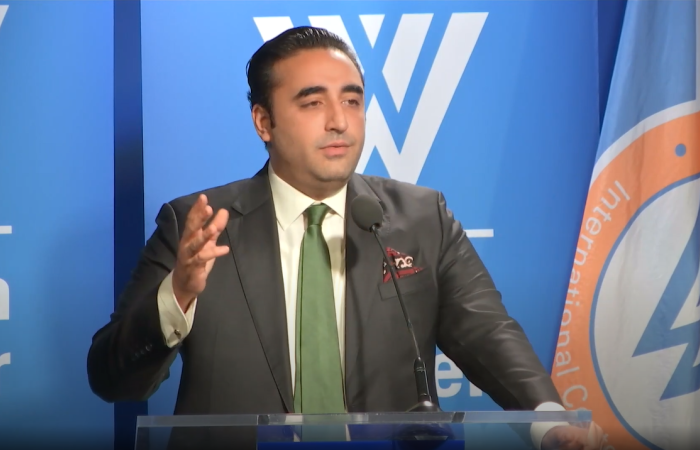