Scientists Need to Reconquer Hearts and Minds With Regard to Climate Change, Says Brito Cruz

Scientists Need to Reconquer Hearts and Minds With Regard to Climate Change, Says Brito Cruz

Although climate science has significantly advanced in recent years—whether in modeling or assessing risks and impacts—part of society still doubts the accumulated scientific knowledge on this subject. This sui generis situation has been observed in Brazil and in other countries that lead research in this field.

To make matters worse, this skepticism exists even as the United Nations Intergovernmental Panel on Climate Change (IPCC) warns of the urgent action needed to reduce the pace of climate change.

“Climate change is one of the greatest examples of how science is important to society, because it was science that, decades ago, discovered that this phenomenon was and is still occurring,” said Carlos Henrique de Brito Cruz, scientific director of FAPESP, at the opening of the annual meeting of the FAPESP Research Program on Global Climate Change (PFPMCG), which took place last week.

The meeting, which aimed to evaluate the program after ten years (it launched in 2008) and propose new approaches, also served as a reflection on the importance of scientific dissemination and scientific literacy—the sharing of knowledge and the scientific method with the general population, especially in schools.

“We need excellence in science and also in communicating with society, which suffers the impacts of this phenomenon [climate change]," said Brito Cruz. “It is not a matter of opinion; it was proven through research, measurement, testing, and verification several years ago by scientists around the world. What I notice is that we Brazilians, and also American, French, and English scientists, are not conquering hearts and minds,” he said. 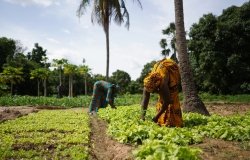 Publication
Environment
Meeting Report | The Road to COP-26: Session 1 of the Brazil-U.S. Dialogue on Sustainability and Climate Change