When people ask how long it takes to get from one place to another in São Paulo, there is usually one universal response: anywhere between 20 minutes and three hours. Urban mobility has always been one of the city's main bottlenecks, and state- and municipal-level administrations have failed to fix it. With 7.4 cars per ten people, driving in São Paulo is a challenge. And although the city's subway system is by far Brazil's best, it still leaves much to be desired.

Inaugurated in 1974, the São Paulo Metro has opened an average of 1.9 stations per year. That number is far below other Latin American urban centers, such as Santiago (2.7 stations per year, since 1975), and Mexico City (3.3 stations per year, on average). For decades, many analysts attributed this neglect to the idea that wealthier populations do not use the subway, diminishing its appeal to local governments—which have historically catered more to the needs of the elites.

But a recent study by the São Paulo Metro showed an important demographic change in the population using the underground. Over the past decade, lower-income families have opted increasingly for cars—partially due to the fact that less-skilled workers have started to work for ride-hailing services en masse—while wealthier people are now relying more on public transportation.

A Lack of Coordinated Public Policies

More than anything, the study shows that São Paulo's state and municipal governments have failed to coordinate efforts and provide a public transportation network that combines buses and subway trains in an effective manner.

On the one hand, lower-income people were pushed into cars due to more expensive bus tickets (the mass street protests of 2013 began with demonstrations against rising bus fares in São Paulo). On the other hand, the federal government invested heavily in tax breaks for the auto industry, looking to boost consumption. Meanwhile, public investments in new subway lines privileged wealthier neighborhoods.

These policies have accentuated inequalities in São Paulo. Over the past decade, lower-income families got their first taste of owning a family car (there was a 42-percent increase in the number of households owning vehicles). At the same time, the top financial bracket moved closer to the reality of developed nations, often gaining a “post-car” mentality.

Despite all the shortcomings of the São Paulo metropolitan transport system, some efforts have been made to increase integration. Line 4 of the city's subway, which connects the heart of São Paulo to its financial center, has been extended further to poorer regions in the western part of the city.

Even during the economic crisis, the number of trips increased by a rate almost twice that of the overall population growth (10.3 and 6.9 percent, respectively). A drop in formal jobs and the proportional increase of itinerant employment, where there is no fixed address, contributed to ridership growth. Another explanation has to do with the concentration of labor in São Paulo's downtown. Sixty-four percent of all jobs in the Greater São Paulo area are in the city’s center—increasing the number of people who have to commute.

And a more integrated network is more appealing to users, as it lowers commuting times. A trip between São Caetano do Sul (a satellite city to the southeast of São Paulo) and the University of São Paulo (to the west of the city) could take up to two hours by car—almost twice as long as the journey via overground and underground trains.

However, if the metro network is beginning to become more functional, the same cannot be said about the bus system. While the city has invested in creating bus corridors and lanes, it has not invested in new routes and more vehicles to reduce commute times. As a result, people are beginning to abandon buses. This form of transportation lost 8 percent of its passengers in a decade, which could create a vicious cycle: as passengers migrate to other types of transportation, they reduce the system's funding—which makes it even harder to invest in improvements.

Overall, commutes by bicycle in São Paulo have increased 24 percent over the past decade, to 377,000 each day. But it is interesting to note that among wealthy Brazilians earning more than $2,900 per month (R$ 11,000), the jump was a whopping 275 percent.

The trend came about after the municipal administration increased its investments in bike lanes across the city during the term of former Mayor Fernando Haddad. During his four years, bike lanes expanded sixfold to a total of 498 kilometers. Since 2016, however, investments have stalled. Sitting Mayor Bruno Covas is promising to kickstart a project to set up 1,420 kilometers of new bike lanes by 2028. 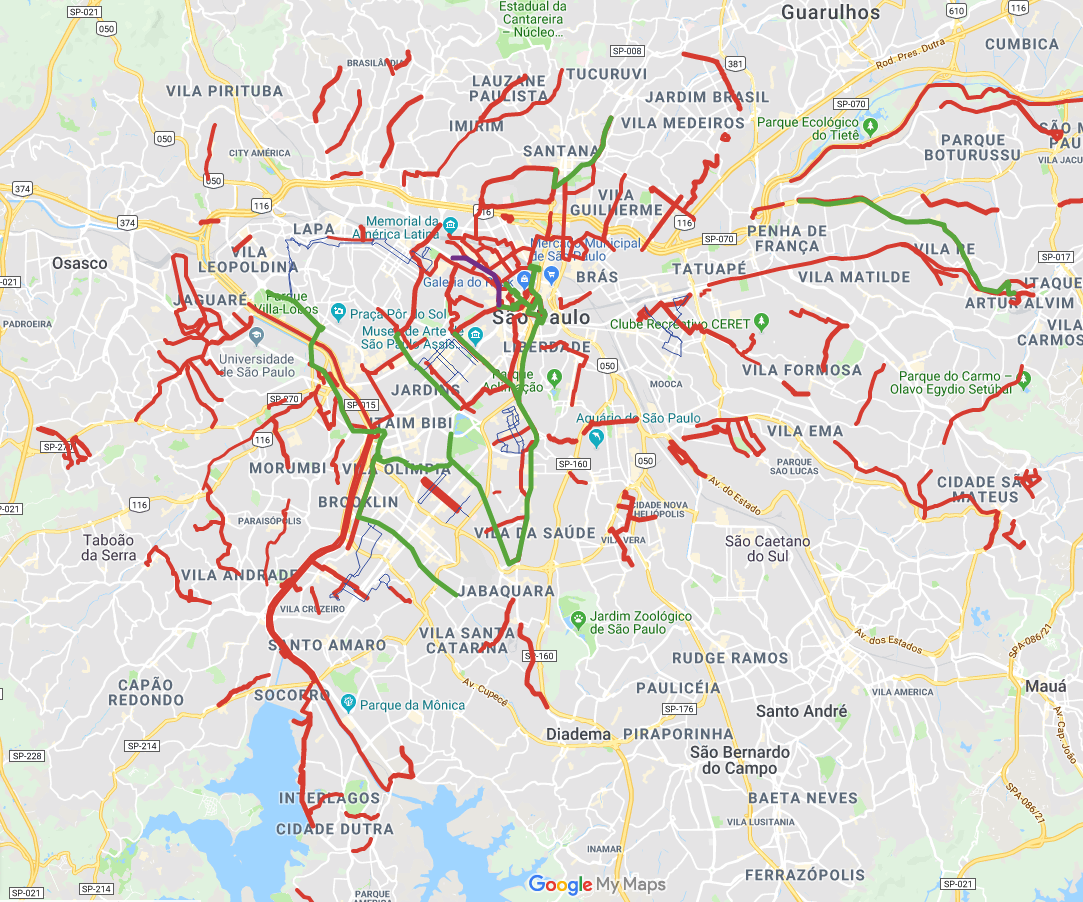 The main conclusion of the study is that São Paulo still lacks a proper urban development plan. Investments in public transportation influence the direction in which a city grows—and rather than trying to decentralize the city, São Paulo is instead reinforcing the same congested commuter routes.