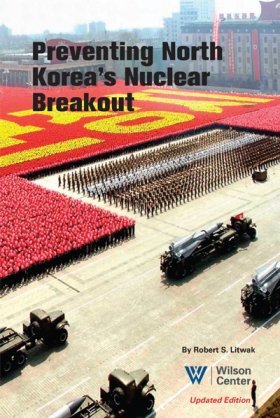 This edition of Preventing North Korea’s Nuclear Breakout includes an updated Executive Summary section that incorporates subsequent developments since its initial publication in February 2017 at the advent of the Trump administration. The monograph draws on Litwak’s previous analysis of North Korea’s nuclear challenge in Outlier States: American Strategies to Change, Contain, or Engage Regimes, published in 2012, which was the third in a series of books on the normative challenge to international order posed by “rogue states.”

North Korea became a nuclear-weapon state in 2006, but now, little more than a decade later, is on the verge of a strategic breakout. The North’s ability to miniaturize nuclear warheads and mount them on intercontinental ballistic missiles is a game changer for the United States. The Trump administration assumed office having made the avowed commitment to block North Korea’s crossing of this important threshold—the ability to strike the U.S. homeland with a nuclear weapon.

This study assesses the available U.S. policy options, including the use of military power, and makes the case for a pivot to diplomacy through a strategy of “coercive engagement” to achieve a feasible objective. The June 2018 summit meeting between President Donald Trump and North Korea’s “supreme leader” Kim Jong-un has created a new political dynamic. A near-term full rollback of the North’s nuclear and missile capabilities is not a realistic possibility. A freeze agreement constraining those capabilities—that is, bending the curve—is what this latest round of diplomacy might aim to achieve.