Afghanistan and Pakistan: Conflict, Extremism, and Resistance to Modernity 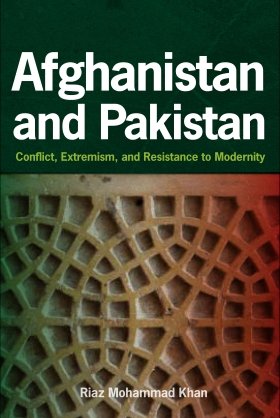 This timely study surveys the conflict in Afghanistan from Pakistan’s point of view and analyzes the roots of Pakistan’s ambiguous policy—supporting the United States on one hand and showing empathy for the Afghan Taliban on the other. The author, a former foreign secretary of Pakistan, considers a broad range of events and interweaves his own experiences and perspectives into the larger narrative of the Afghanistan-Pakistan relationship.

Beginning with the 1989 departure of Soviet troops—and especially since the 2001 NATO invasion—Riaz Mohammad Khan examines the development of Afghanistan and surveys the interests of external powers both there and in Pakistan. He discusses the rise of extremism and religious militancy in Pakistan and its links with ongoing conflicts in Afghanistan. Ultimately, Khan argues, Pakistan reveals a deep confusion in its public discourse on issues of modernity and the challenges the country faces, an intellectual crisis that Pakistan must address to secure the country’s survival, progress, and constructive role in the region.

Riaz Mohammad Khan served as Pakistan’s Foreign Secretary (2005–8) and the country's ambassador to China (2002–5), the European Union and Belgium (1995–98), and Kazakhstan and Kyrgyzstan (1992–95). He is author of Untying the Afghan Knot: Negotiating Soviet Withdrawal and was the Woodrow Wilson Center’s Pakistan Scholar in 2009.

Part I. The Afghanistan Context: The Continuing Conflict
1. The Post–Soviet Withdrawal Phase of the Afghanistan Conflict (1989–1995)
2. The Advent of the Taliban (1995–2001)
3. Post–9/11 Afghanistan
4. The External Powers: Interests and Concerns

Part II. The Pakistan Context and the Challenge of Extremism
5. The Challenge of Religious Militancy and Extremism in Pakistan
6. Pakistan: A Case of Intellectual Crisis and Weak Governance

“…an extremely important memoir-analysis by Riaz Mohammad Khan, a Pakistani diplomat who served as foreign secretary of Pakistan from 2005 to 2008. While sharply criticising some aspects of the Pakistani military’s strategies regarding Afghanistan, he also brings out well the sheer intractibility of the Afghan situation, and the degree to which Pakistan too has been trapped by forces and developments beyond its control. It is exceptionally important that US policy makers read the book by (Riaz) Mohammad Khan, because there is strong tendency in US official circles and US media to treat the Pakistani state as the enemy in Afghanistan, and to assume that Taliban resistance in Afghanistan would largely disappear if Pakistan could somehow be bullied or bribed into submission. This misunderstands the deep popular sympathy on both sides of the border for the Taliban, who are seen among many Pakistani Pushtuns as a legitimate resistance force.”—Anatol Lieven, The New York Review of Books

“This book offers an insider’s extremely well-informed account of events in the Afghanistan-Pakistan region and an insightful perspective on history that is normally not available in academic books. Riaz Mohammad Khan has produced a serious piece of work but one that is also eminently readable.”—Shuja Nawaz, director, South Asia Center, Atlantic Council

“The most compelling features of this book are the analysis of Pakistan’s intellectual crisis and of the interests of various regional players in Afghanistan.”—Ziad Haider, Harvard Kennedy School

“In the entire subcontinent, nothing like this work has been written or ‘even attempted’, matching the breadth of its sweep and the depth of its analyses.”—A.G. Noorani, Frontline

“Riaz Mohammad Khan is uniquely qualified to provide an insider’s perspective on Pakistan’s involvement in Afghanistan and the complex interplay between internecine Afghan conflicts and the competing interests of external powers.”—Dr. Maleeha Lodhi, The News International

“Essential reading for anyone who wants to understand… what has gone wrong here over the last 64 years, and particularly the last 30 some.”—Cyril Almeida, Dawn.com

“I wish there had been a book of this scope and analytic acumen available when I went to Pakistan for my first assignment there in 1984.”—Alan Eastham, US Ambassador (Ret'd.)

“Khan is the epitome of a voice of reason in the Pakistan foreign policy establishment.”—Michael Semple, Middle East Journal

“The author is a voice for reason and moderation and provides both a history of and insights into the development of the present situation.”—Michael Kyle, Asian Affairs