Break all the Borders: Separatism and the Reshaping of the Middle East 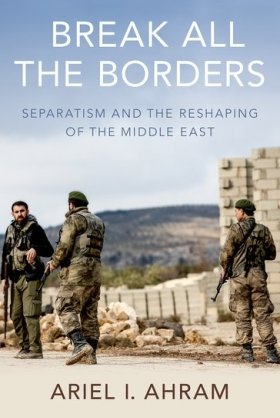 By Ariel I. Ahram

Book Launch: Break all the Borders: Separatism and the Reshaping of the Middle East

Since 2011, civil wars and state failure have wracked the Arab world, underlying the misalignment between national identity and political borders. In Break all the Borders, Ariel I. Ahram examines the separatist movements that aimed to remake those borders and create new independent states. With detailed studies of the Islamic State in Iraq and Syria, the federalists in eastern Libya, the southern resistance in Yemen, and Kurdish nationalist parties, Ahram explains how separatists captured territory and handled the tasks of rebel governance, including managing oil exports, electricity grids, and irrigation networks. Ahram emphasizes that the separatism arose not just as an opportunistic response to state collapse. Rather, separatists drew inspiration from the legacy of Woodrow Wilson and ideal of self-determination. They sought to reinstate political autonomy that had been lost during the early and mid-twentieth century. Speaking to the international community, separatist promised a more just and stable world order. In Yemen, Syria, Iraq, and Libya, they served as key allies against radical Islamic groups. Yet their hopes for international recognition have gone unfulfilled. Separatism is symptomatic of the contradictions in sovereignty and statehood in the Arab world. Finding ways to integrate, instead of eliminate, separatist movements may be critical for rebuilding regional order.

Introduction
1. The Rise and Decline of Arab Statehood, 1919 to 2011
2. 2011: Revolutions in Arab Sovereignty
3. Cyrenaica
4. Southern Yemen
5. Kurdistan
6. The Islamic State
Conclusion: The Ends of Separatism in the Arab World

"The breakdown of state authority is the root of the current Middle East crisis, and what comes in its aftermath is the biggest question facing the region. Ariel Ahram helps us to understand at least one of the paths forward from the rubble of the old state system in this theoretically-informed and empirically-rich book. The separatist efforts he examines might not eventually succeed in achieving internationally recognized statehood, but they are already one of the most important drivers of regional politics." -F. Gregory Gause III, Texas A&M University

"Ariel Ahram's Break All the Borders is a remarkable work of scholarship and a fascinating contribution to the story of the Middle East over the past decade. Ahram has mastered a breathtaking range of materials and presented them in an easily comprehensible fashion to demonstrate how the dynamics of secessionism help drive state making and state breaking. His meticulous, careful research leads to an important set of conclusions that should inform both academic study and policy making in the 21st Century."-Kenneth M. Pollack, author of Armies of Sand

"This book offers a thoughtful and provocative perspective on the resilience of the contemporary states of the Arab world through the lens of some of the most resilient alternatives-the longstanding regional, ethnic, and religious allegiances laid bare in the aftermath of the uprisings of 2011. In outlining the fortunes of several separatist claims to statehood as well as the challenge to the prevailing order represented by the Islamic State, Ahram provides a salutary reminder of both the fragility and the hardiness of the region's borders." -Lisa Anderson, Columbia University