Captive Society: The Basij Militia and Social Control in Iran 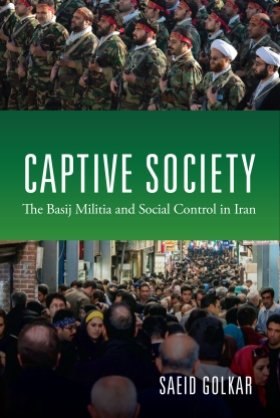 Iran’s Organization for the Mobilization of the Oppressed (Sazeman-e Basij-e Mostazafan), commonly known as the Basij, is a paramilitary organization used by the regime to suppress dissidents, vote as a bloc, and indoctrinate Iranian citizens. Captive Society surveys the Basij’s history, structure, and relations with the Revolutionary Guard, as well as it sociology and its roles in Iran’s society, economy, and educational system. Saeid Golkar’s account draws not only on published work—including publications of the Basij itself and of the Revolutionary Guard and allied websites and blogs—but also on his own informal communications with Basij members while he studied and taught at Iranian universities, and on limited surveys and a series of interviews he conducted in Iran.

Saeid Golkar is a lecturer in Middle East and North African studies at Northwestern University and a visiting fellow for Iran policy at the Chicago Council on Global Affairs. He was a fellow at the Wilson Center in 2013–14.

Part II: The Basij and the Shaping of an Insiders’ Network
2. The History and Transformation of the Basij, 1980–2013
3. Penetration into Society: The Organizational Structure of the Basij
4. Mass Membership and Recruitment Training
5. The Mass Indoctrination of Basij Members

Part V: The Sociology of the Basij—Motivations and Loyalty
14. Basij Members—Islamic Warriors or Religious Thugs?

Conclusion: The Emergence of a Captive Society

Captive Society was discussed in Gareth Smyth’s interview with Saeid Golkar in the Guardian (September 8, 2015).

“Golkar’s monograph is an important sociological account of the ways in which the Islamic Republic imagines the Basij as the force that holds its society captive. Golkar clearly demonstrates that the Basij are the prism through which the Islamic Republic negotiates the terms of ideal citizenship and revolutionary morality.”—Narges Bajohgli, International Journal of Middle East Studies

“Saeid Golkar should be commended for producing the first extensive monograph on the Basij.… His book will be of immediate interest to anyone involved in the study of contemporary Iran, authoritarian states, or irregular armed groups.”—Afshon Ostovar, The Middle East Journal

“This book is an important and commendable addition to the literature on Iranian politics, and will be of interest to anybody seeking a better understanding of Iranian and Middle East politics in general. The author deserves praise for his innovative method of examining the Basij and its role in Iranian society through the use of primary sources, and surveys, which adds to our knowledge of this under-researched organization.”—Hesam Forozan, Global Policy

“Saeid Golkar…has covered the subject thoroughly and done so in plain textbook prose that makes the telling of the tale—specifically, coverage of the layout and history of the most pervasive organizational element exploited by the Iranian regime to create, reinforce, and sustain a society obedient to its will—on each page all the more chilling.”—BackChannels

“In Golkar’s skillful rendering, the Basij appears so vast that all Iranians can find some facet of themselves reflected in it.… But the group is more feared than respected, and Golkar views it as a major impediment to any liberalization or democratization in the Islamic Republic.”—John Waterbury, Foreign Affairs

“The book is a welcomed contribution in offering a detailed study of the Basij organization, its history, and the transformations it has undergone and the expansion of its role since its formation in the 1980s. The book provides an informed perspective on how widespread the presence of the Basij has become and on the continuous though constantly shifting role of the Basij in protecting the state.”—Shahla Talebi, Journal of the Society for Contemporary Thought and the Islamicate World

“There is a dire need for a reliable survey of this important Iranian institution, and this book fills the vacuum.”—Ahmad Ashraf, Columbia University

“This is the first full-length study of this critical organization in the Iranian power structure. Dr. Golkar provides a comprehensive account of the Basij’s organizational structure, insight into the social background of its membership, the training and indoctrination of the members, and the Basij’s extensive security, watchdog, and propaganda role in Iranian society. In the part of the book that introduces the newest material, he describes the attempt of the Basij to penetrate virtually all areas of Iranian life.”—Shaul Bakhash, George Mason University