Cities without Suburbs: A Census 2010 Perspective 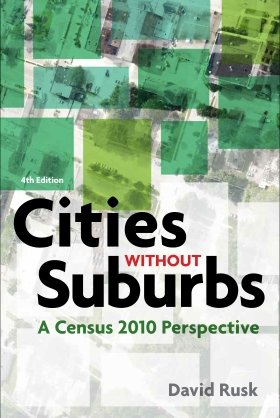 Cities without Suburbs, first published in 1993, has influenced analysis of America’s cities by city planners, scholars, and citizens alike. David Rusk, the former mayor of Albuquerque, argues that America must end the isolation of the central city from the suburbs if it is to solve its urban problems.

Rusk’s analysis, extending back to 1950, covers all metropolitan areas in the United States but focuses on the 137 largest metro areas and their principal central cities. He finds that cities that were trapped within old boundaries during the age of sprawl have suffered severe racial segregation and the emergence of an urban underclass; but cities with annexation powers—termed “elastic” by Rusk—have shared in area-wide development.

The fourth edition updates Rusk’s argument using the 2010 Census and the American Community Survey. It provides new material on the difference between population trends and household trends, the impact of Hispanic immigration, and the potential for city-county consolidation. The fourth edition also brings added emphasis to “elasticity mimics”—a variety of intergovernmental policies that can provide some of the benefits of regional consolidation efforts in situations where annexation and consolidation are impossible.

David Rusk is an independent consultant on urban and suburban policy. He is the author of Baltimore Unbound: A Strategy for Regional Renewal and Inside Game/Outside Game: Winning Strategies for Saving Urban America.

“The evidence that Rusk has marshaled here makes a clear and cogent case that the survival of many American cities depends on making city and suburb one.”—New York Review of Books

“Every mayor, every governor, every county executive, indeed anyone who cares about our great but ailing cities ought to read it.”—Detroit Free Press

“This book is MUST reading. Rusk makes his argument concisely, logically, and forcefully.”—Journal of the American Planning Association