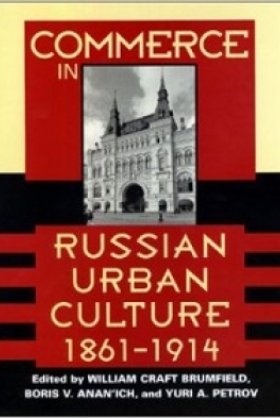 Tsarist Russia’s commercial class is today receiving serious attention from both Russian and non-Russian historians. This book is a contribution to that literature. Commerce in Russian Urban Culture, 1861–1914 examines the relation between the entrepreneurial world, especially business and banking, and the cultural milieu of Russia. Going beyond the commercial-cultural connection of charitable activity, the contributors to this collaborative project also study cultural activity undertaken by enterprises for their own purposes, notably bank and commercial architecture.

“Culture and commerce” encompasses two areas in this volume. The first is the business milieu itself as a social and cultural phenomenon. Class and social stratification, types of entrepreneurs, and their mentality, religious affiliations, and charitable activities and donations are covered. The second is their impact on the form of cities, including not only Moscow and St. Petersburg but Odessa and Nizhnii Novgorod. Banks, insurance companies, and large commercial firms reshaped Russian cities with the construction of buildings for their own operations and retail shops, stock exchanges, mansions, and public buildings.

William C. Brumfield is a professor in the department of Germanic and Slavic languages at Tulane University; he is a major historian and photographer of Russian architecture. Boris V. Anan’ich is with the Institute of Russian History, Russian Academy of Sciences, St. Petersburg. Yuri A. Petrov is head of the Department of Contemporary History at the same institute.

“This is a very important study for the information it gives and also for the insight into late Imperial Russia and its commercial elite, a group whose influence is still little known. To a great degree it challenges an older view of Imperial Russia as lacking a vital urban middle class.”—Steven Marks, Clemson University

“The volume contains a wealth of new and little-known material. Its publication is extremely welcome, and it ought to receive a warm response from academics in several disciplines, most importantly, history and art.”—Jeffrey Brooks, Johns Hopkins University, and author of Thank You, Comrade Stalin! Soviet Public Culture from Revolution to Cold War