Corrupt Circles: A History of Unbound Graft in Peru 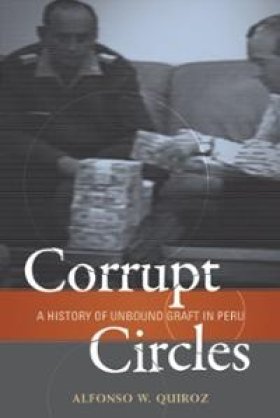 As Peru prosecutes former president Alberto Fujimori and other alleged participants in state crimes, the country's longstanding culture of impunity is under attack, and the subject of corruption has acquired a new prominence, both in Peru and in Latin America more broadly. In Corrupt Circles, Alfonso W. Quiroz gives a definitive and thorough history of Peruvian corruption that dates back to the country's colonial period. He demonstrates how corruption has been deeply embedded in Peru's state institutions and has damaged the country's prospects, and he offers a comprehensive estimate of the costs of corruption to the country's development. Far from being a hidden crime, the author finds, corruption is well documented throughout Peru's history in the records of its opponents in government, journalism, and diplomacy. The pervasiveness of corruption has been aided by the readiness of both Peruvians and the international community to turn a blind eye.

A book launch event with the author was held Thursday, March 19, 2009, at the Woodrow Wilson Center.

Mr. Jorge R. Peschiera, the government official in charge of Peru's debt negotiations in the 1990s has taken issue with statements regarding those negotiations and his own role in them as described in the book Corrupt Circles by Mr. Alfonso W. Quiroz. Mr. Peschiera’s objections and comments by the book’s author follow.

The book Corrupt Circles:  A History of Unbound Graft in Peru by Alonso W. Quiroz makes false statements and omits relevant facts about myself and about the debt negotiation process that took place from 1993 through 1997 for which I was directly responsible.

As Peru’s Chief Debt Negotiator I devised and directed various programs by which Peru regained access to foreign credit and reduced its Government debt by 60%, from 12 to less than 5 billion US dollars, spreading out its repayment over 30 years at low interest rates. These programs, which concluded with the Brady Plan in 1997, were carried out with the voluntary participation of 99.5% of Peru´s creditors that had unpaid claims for more than a decade. No other country in Latin America achieved such a success in that period. These accomplishments were essential for Peru's economic expansion during the last 15 years. Quiroz's book does not mention any of these objective facts.

My book El Plan Brady Peruano, published in 2002 by Apoyo Comunicaciones, presents a detailed account of the debt reduction operations that took place under my direction from 1993 through 1997 and its results. (See www.bradyplanperu.info.)

In order to support its thesis of “unbound graft,” the book fails to mention a decade of investigations that absolved me from any charges of corruption or wrongdoing:

From 2001 through 2003, three Congressional Committees investigated the foreign debt negotiation. Their final reports led to six years of criminal investigations by Peru's Attorney General, which found no wrongdoing by me or anyone else associated with the foreign debt programs.

All of the debt reduction programs were audited by Peru's independent Controller Office, which found no evidence of wrongdoing. The Controller's findings were not criticized by the Congressional investigations.

Mr. Quiroz constructed his thesis of corruption in the Peruvian Debt Negotiations making false and defamatory statements about my work and me personally.

1. On page 392, Mr. Quiroz implied that I was “among domestic entrepreneurs and financiers who established covert illegal agreements with Montesinos and Fujimori.”   However, no authority has ever accused me of having an agreement with either Montesinos or Fujimori (illegal or otherwise); I never met nor even spoke to Montesinos; and I never had any agreement with him or Fujimori.

2. On page 392, in order to construct a corruption case involving Mr. Dionisio Romero, then Chairman of Banco de Credito del Peru (BCP), Mr. Quiroz states that from 1993 to 1997, during the debt negotiation period, I was a high-level manager of BCP. That is false. I left BCP in 1991 and have not held any position at BCP or any related company since that time.

3. On page 392, Mr. Quiroz also asserts as a fact that I was “intimately involved in using insider information to purchase depreciated Peruvian foreign debt bonds.” That is also false.  None of the inquiries about the debt negotiations or about my personal finances made such a damaging accusation.

4. The book criticizes the repurchase program executed from 1994 through 1996 by which a substantial portion of Peru's debt was acquired in the secondary market by the New York branch of Swiss Bank Corporation. This program allowed Peru to obtain a 75 percent discount on the total amount of repurchased debt.

On pages 399-400, Mr. Quiroz alleges that the repurchase program was “generally considered irregular and unacceptable by [unnamed] international financiers.” Mr. Quiroz cites no sources to justify that statement, which is again false. Certainly Peru's legal counsel in Lima and New York and a major international bank did not consider that program irregular or unacceptable. On the contrary, the Federal Reserve Bank of New York respected Peru´s strategy and kept it secret from Peru's creditors during and after the negotiations.

5. On page 400, Mr. Quiroz asserts that insider information was used to benefit several international banks. That statement is wrong. No misuse of that information was ever found according to the extensive audits and investigations that followed. The only commercial bank informed about the buyback was Swiss Bank. The agreement with Swiss Bank forced it to sell into the repurchase program, at market prices, all of its Peruvian debt holdings and prohibited it from buying any Peruvian debt for its own account during the execution of the program and required it to maintain the secrecy of the program. Thus, neither Swiss Bank nor any other participant in the secondary market benefited from inside information.

6. The statement on page 400 that Peru “should have paid only 10 to 15 percent of the bonds face value” has the chronology of events wrong and is also wrong.  In 1992 Peruvian debt traded at such deep discounts. However, when I took on the role of Chief Debt Negotiator in August 1993 it was trading at 43 percent of its face value, a price level similar to the prevailing price at the time when the repurchase program was started in 1994.

7. Finally, the statement on page 400 that the debt Peru owed to Russia was “clumsily negotiated” is wrong.  Under close supervision by the Minister of Finance, Peru repurchased its debt to Russia at an 87 percent discount, saving close to 900 million US dollars. The Peruvian Controller Office found no wrongdoing in its special examination of this transaction.

All of Mr. Quiroz's accusations of corruption during the Peruvian debt negotiations in the 1990s have been rejected by responsible authorities. By broadcasting non-existent corruption charges, Mr. Quiroz's book diverts public attention away from the achievements of the Fujimori era and undermines efforts to present a fair and balanced analysis of the historical record.

Peru´s debt negotiations during the 1990s are an example of good management. Peru's stock of foreign debt was substantially reduced and its repayment schedule extended, the country regained access to international financial markets and the Government acquired the fiscal discipline and negotiation capabilities that have allowed the country to achieve investment grade status. And there was no corruption.

In my book of five hundred pages, telling a story whose time spans from 1750 to 2000, two paragraphs discuss (one directly, the other indirectly and partially as historical context) Mr. Jorge Peschiera’s involvement during the mid-1990s in activities related to repurchase of Peruvian government debt.

At the time I wrote the book, these two paragraphs relied on documents reporting on investigations of those activities. They relied also on the analysis by other authors, one of them former Peruvian congressman Manuel Dammert whose work was based in turn on internal reports of the Peruvian Ministry of Economy and Finance and the Banco de la Nación. There is an extensive analysis on issues and activities regarding the Peruvian debt negotiations in those sources.

As Mr. Peschiera states, he was no longer a manager of the Banco de Crédito del Perú when he undertook the debt renegotiation and repurchase, and I regret the misstatement. Similarly, the text should not have implied that Mr. Peschiera dealt directly with President Fujimori or intelligence chief Vladimiro Montesinos in undertaking his role as debt negotiator.

Overall, Corrupt Circles is an academic work that seeks to offer a general historical study of the developmental impact of particularly defined patterns of corruption, over more than two hundred and fifty years, that underlay numerous distinct cycles of graft. One chapter concerns the Fujimori era, and it describes the burdens of corruption on failed opportunities for reform. The chapter is not aimed at assessing Peru’s economic expansion under the Fujimori administration (the success of whose reforms is in fact, subject to debate, especially due to their institutional and social impact), but at describing the transgressions and abuses central to that regime.

"There is no other systematic assessment of corruption for such a long time period for Peru or, to the best of my knowledge, any other Latin American country. Quiroz's effort is monumental and unprecedented in its span of Peruvian history."—Cynthia McClintock, George Washington University

"This is a substantial contribution to the understanding of corruption in Latin America."—Alvaro Vargas Llosa, The Independent Institute

"Corrupt Circles combines different tools of economic, political, and historical analysis to identify the costs and consequences of corruption in a developing society. The book particularly adopts and applies recent methodological breakthroughs by economists who conceive corruption as an obstacle for overall development.,"—Rorotoko

"This readable narrative provides a sense of the major commonalities and novelties in corruption dynamics from one era to the next in Peru... In a useful appendix, Quiroz estimates the costs of corruption from 1810 through 2000 in Peru... A welcome effort to chronicle corruption over time."—Choice

"Elegantly written and passionate...Corrupt Circles is more than a dry academic exercise."—Kendall W. Brown, The Historian