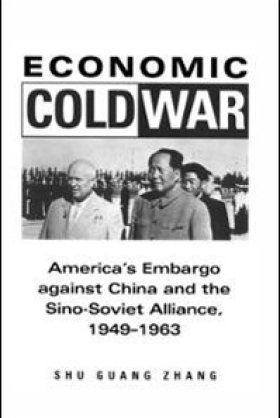 Why would one country impose economic sanctions against another in pursuit of foreign policy objectives? How effective is the use of economic weapons in attaining such objectives? To answer these questions, the author examines how and why the United States and its allies instituted economic sanctions against the People’s Republic of China in the 1950s, and how the embargo affected Chinese domestic policy and the Sino-Soviet alliance.

The literature on sanctions has largely concluded that they tend to be ineffective in achieving foreign policy objectives. This study, based on recently declassified documents in the United States, Great Britain, China, and Russia, is unusual in that it looks at both sides of “the China embargo.” It concludes that economic sanctions provide, in certain circumstances, an attractive alternative to military intervention (especially in the nuclear age) or to doing nothing. The author argues that while the immediate effects may be meager or nil, the indirect and long-term effects may be considerable; in the case he reexamines, the disastrous Great Leap Forward and Anti-Rightist campaign were in part prompted by the sanctions imposed by the United States and its allies. Finally, though the embargo created difficulties within the Western alliance, Beijing was driven to press the USSR for much greater economic assistance than Moscow thought feasible, and the ensuing disagreements between them contributed to the collapse of the Sino-Soviet alliance.

Going beyond the rational choice approach to international relations, the book reflects on the role of mutual perceptions and culturally bound notions in shaping international economic sanctions. In addition to contributing to a better understanding of the economic aspects of Cold War history, the book attempts to give more empirical substance to the developing concept of “economic diplomacy,” “economic statecraft,” or “economic warfare” and to relate it to the idea of conflict management.

Shu Guang Zhang is Professor of U.S. History and International Relations at the University of Maryland. He is the author, most recently, of Deterrence and Strategic Culture: Chinese-American Confrontations, 1949–1958, and Mao’s Military Romanticism: China and the Korean War, 1950–1953.

“Zhang Shu Guang has carried out a thorough research of U.S. and British economic diplomacy toward China in the 1950s and 1960s. Economic Cold War should be of great interest to students of Sino-American relations and those researching the utility of economic sanctions in pursuit of foreign policy goals.”—The Russian Review

“Zhang has produced an outstanding contribution to our understanding of both the static and dynamic aspects of Sino-American relations during the early years of the Cold War. His book also commends itself to readers occupied with more contemporary US foreign policy issues. . . . Highly recommended for public, academic, and professional library collections.”—Choice

“Economic Cold War is a valuable contribution both to the historical literature on the cold war and to the economic sanctions literature.”—History

“Zhang provides an insightful narrative and analysis of sanctions policymaking in the Truman, Eisenhower, and Kennedy administrations, as well as of evolving interalliance politics regarding the multilateral sanctions regime.”—History

“Shu Guang Zhang’s meticulous research on the American-led economic embargo against the People’s Republic of China from 1949 to the 1963 Sino-Soviet split brings forward a great deal of new information and, not surprisingly, new conclusions. In clear prose, Zhang explains American goals, perceptions of the efficacy of the sanctions, and why three different presidents maintained them. On the Chinese side, he describes and explains the reactions to the blockade.”—International Journal