Final Acts: A Guide to Preserving the Records of Truth Commissions 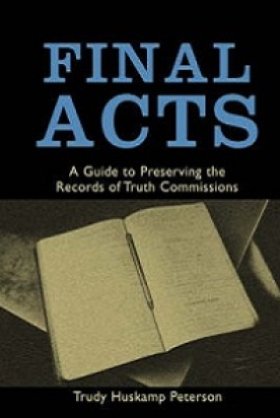 Twenty truth commissions have completed their work of examining and reporting on the abuses of deposed regimes, leaving behind a wide variety of records: transcripts, video and audio recordings, e-mail and computer files, and artifacts. Why save such evidence? According to Trudy H. Peterson, preservation “completes the commission’s work. Oppressive regimes try to impose a selective amnesia on society … Saving the records makes sure that amnesia does not prevail.”

Final Acts is a guide to questions of law, politics, physical preservation, and access regarding materials generated by truth commissions. For example, how do the records relate to the law that created the commission? Who owns the evidence? Are there political constraints on the preservation of, or access to, some records? Does the country have an institution professionally capable of maintaining the records? Final Acts also describes the truth commissions that have completed their work so far and the disposition, or in some cases the loss, of their records.

Trudy H. Peterson’s thirty-year career as an archivist has included serving as the deputy archivist and acting archivist of the United States and president of the Society of American Archivists. In 1998 she was asked to advise South Africa’s Truth and Reconciliation Commission on the disposition of its records. She is now a consulting archivist. She was a public policy scholar at the Woodrow Wilson International Center for Scholars in 2003–2004.

The full text of this book is available here in PDF format.

3. Discussion of the Questions

“An evocative, informative study that merits widespread attention not only from commission officials but from numerous researchers and the international archival community as well.”— Joel Wurl, American Archivist