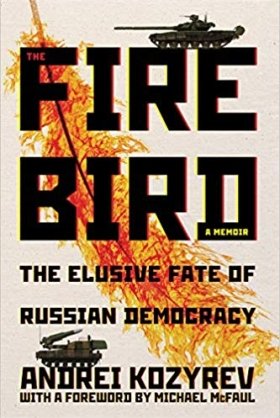 Book Launch: The Firebird: The Elusive Fate of Russian Democracy

Andrei Kozyrev was foreign minister of Russia under President Boris Yeltsin from August 1991 to January 1996. During the August 1991 coup attempt against Mikhail Gorbachev, he was present when tanks moved in to seize the Russian White House, where Boris Yeltsin famously stood on a tank to address the crowd assembled. He then departed to Paris to muster international support and, if needed, to form a Russian government-in-exile. He participated in the negotiations at Brezhnev’s former hunting lodge in Belazheva, Belarus where the leaders of Russia, Ukraine, and Belarus agreed to secede from the Soviet Union and form a Commonwealth of Independent States. Kozyrev’s pro-Western orientation made him an increasingly unpopular figure in Russia as Russia’s spiraling economy and the emergence of ultra-wealthy oligarchs soured ordinary Russians on Western ideas of democracy and market capitalism.

The Firebird takes the reader into the corridors of power to provide a startling eyewitness account of the collapse of the Soviet Union, the struggle to create a democratic Russia in its place, and how the promise of a better future led to the tragic outcome that changed our world forever.

Kozyrev’s gripping book destroys the simple view that all was well in Russia until Vladimir Putin came along. It describes from the inside how the Soviet nomenclature enriched themselves; how the KGB transformed itself into the FSB while retaining the same views as before; and the conflicts within Russia over the kind of actor it should be on the world stage… It’s a major contribution to our understanding of Russia’s unhappy trajectory since the collapse of communism’

Andrei Kozyrev’s riveting account of the challenges he confronted as the first Foreign Minister of the Russian Federation provides a rare spotlight on key Russian developments.  Kozyrev details in graphic terms the unfolding of the Russian democracy movement and the various attempts to undermine its advancement.  It is a bracing yet painful read; a portrayal of how a democratic Russia might have held.  Yet his memoir concludes with a hopeful message — that someday, the Russian people will have the freedom they deserve.

Andrei Kozyrev’s memoir is required reading for anyone who seeks to understand where Russia is today, where it has been, and where it may now be headed. In The Firebird, he weaves a compelling personal narrative that spans his country’s transformation from the closed Soviet system, to its reengagement with the world in the 1990s, and the subsequent resurgence of its confrontation with the West.  Endowed with the experience and the sensitivity of a participant in the central dramas of the Yeltsin era, this book will entertain, educate and surprise even the most seasoned observers of Russia. --Matthew Rojansky, Director, Kennan Institute

"This book is absolutely essential reading for anyone hoping to understand post-Soviet Russia and America’s role in shaping its trajectories at home and on the world stage."
—Walter Clemens, New York Journal of Books